Life (and the news) comes at you fast. In our whiplash news cycle, it's easy to miss a couple of the Twitter breaking, flashy chiron moments that go down every hour on the hour over the course of a month.

Here's a curated selection of some of the news that had us scratching our heads, calling our representatives or spiraling on Wikipedia this month.

President Trump intends to rent a fresh fleet of golf carts for his Secret Service sidekicks this summer from a company based in Poughkeepsie. Associates Golf Car, located on Taft Avenue in the Queen City, will supply $95,250 worth of rental carts to the federal government, surpassing Trump's previous record of $92,740 in Delray Beach, Florida, according to Quartz. Secret Service agents have flanked the president during all 178 of his golf outings, which account for just over 20 percent of his time in office. At this rate, Trump's golf expenses are on course to exceed $500,000 since taking office. 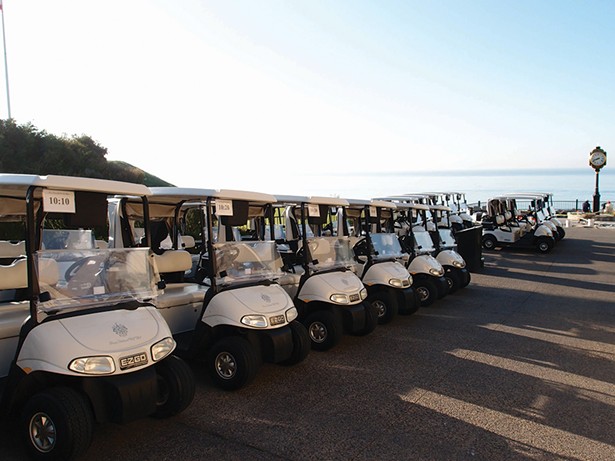 Abandoned spare change is probably the last thing on your mind at the airport as you rush to your terminal. But the Transportation Security Administration (TSA) reportedly rakes in nearly $1 million per year from loose coins left in trays at airport security, according to Vox. Now, the Department of Homeland Security wants in on the goldmine and has requested $3 million from the TSA to fund border security operations. From 2012 to 2018, the TSA's yearly haul leapt from $531,000 to a whopping $960,105. While Congress has historically allowed the TSA to use the money as it pleases, they are considering donating the cash to a charitable cause instead.

Recently, Google has come under fire for treating its shadow workforce of temporary employees as expendable second-class citizens. Temps and contractors now outnumber the tech giant's full-time workforce by nearly 20,000, according to a document obtained by the New York Times. Former Google temps, who remain anonymous due to nondisclosure agreements, claim that temps earn less, receive different benefits, do not get paid vacation, and have no avenues for promotion, despite working long-term alongside fully fledged employees. Google responded to this criticism by saying it would revise its policies to improve the treatment of part-time workers.

From the growing trash heaps at Indonesian and Vietnamese ports to the poisonous plastic plains of Malaysia, western nations' exported pollution is piling up. An investigation by the Malaysian Government revealed that the UK, US, Australia, and Germany were all illegally funneling waste into the country under the guise of other imports. In May, President Rodrigo Duterte of the Philippines threatened to sever diplomatic ties with Canada if they did not take back the 1,500 tons of waste they illegally discarded on Filipino soil between 2013 and 2014, the Guardian reports. The recent pushback from Southeast Asian countries is part of a concentrated effort to stop illegal waste-dumping.

Determined to turn a blind eye to climate change, President Trump continues to rollback the environmental policies of his predecessors, according to the New York Times. In his latest environmental stunt, Trump is commanding parts of the federal government to curb the severity of climate change projections and their potential impacts on the earth. Trump argues that the previous standard of taking century-long predictions represent the worst-case scenario, not the likely reality. Critics of Trump's approach argue that the most detrimental impacts of climate change won't be felt until at least 2050, and the president's decisions put conservation efforts in jeopardy by preventing experts and activists from analyzing and planning for the full scope of climate change.

In May, New Zealand's Minister of Finance Grant Robertson introduced his nation's new "wellbeing budget," according to The Guardian. The first of its kind worldwide, the radical new budget will prioritize social wellbeing indicators over GDP as a determining factor in spending decisions. The plan allocates billions of dollars towards mental health services, child poverty programs, and family violence prevention. The progressive approach aims to close the gap in care between the wealthy and the financially disadvantaged, including nearly half a billion dollars for the "missing middle," to assist people with moderate anxiety and depressive disorders.

Not Feeling the Burn

A new study shows that mole rats are impervious to wasabi's burn, leading scientists to ponder new paths to improve pain medication. Ewan St. John Smith, a neurobiologist at the University of Cambridge, contributed to a study which "demonstrates the power of studying naturally occurring differences in pain sensitivity," according to the New York Times. Out of all animals tested, the highveld mole rat appeared to be the only one impervious to wasabi's potent chemical, allyl isothiocyanate, which caused other critters to scurry in apparent discomfort. The mole rats' neurons are laced with permeable ion channels called NALCN, which makes them less susceptible to the sting. Scientists speculate that studying this internal system could yield more effective pain medication for human patients in the future.

Scientific Sexism in the Animal Kingdom

Recent reports suggest that the volume of male mice used in neurological studies may skew the data's relevance for women, the New York Times reports. According to the National Library of Medicine, male animals outnumber females six to one in lab experiments, even when the study's results are more likely to impact women. Proponents of male-dominant testing contend that female mice's fluctuating hormones would render incomprehensible results. However, Northeastern University neuroscientist Rebecca Shansky disagrees. She asserts that the practice is unscientific and, if anything, male mice are more likely to be hormonally unstable because when they are housed with other males, the dominant mice's testosterone levels climb to five times higher than their subordinates'. On the flipside, female mice's hormonal levels increase fourfold during a brief reproductive period. Shansky has called for stricter requirements on gender equality for mice chosen in experiments to ensure that studies better serve womens' needs.

The steady recurrence of school shootings over the past few years has one New York school in defense mode. Lockport School District is testing uncharted security measures with their facial-recognition program, despite state pushback, BuzzFeed reports. According to Lockport, the system will be used to identify the person's identity and verify their eligibility to enter the building. Critics cite emerging studies analyzing the inaccuracies of such systems, including higher instances of incorrect identification of women and people of color. The New York State Education Department ordered Lockport to wait on implementation until it could analyze the legal hurdles regarding student data privacy and security. But Superintendent Michelle Bradley has said that the country's mass shooting climate makes school security their priority, and that they will carryout testing on non-students (such as faces on the sex-offender registry) despite the state's injunction.

Been sleeping on the news for a while? Check out last month's weird and wild headlines too.