9 Hudson Valley Art Exhibits to Get You through to Spring

"Eleni Smolen: Girl by the Sea/Guardians" at the Woodstock Artists Association & Museum

Known as a gallerist, Eleni Smolen has returned to her daily studio practice as a painter. Her show at WAAM is comprised of work done over the past year. Both the "Girl by the Sea" pictures—which Smolen calls "memory flags"—and the larger, simplified "Guardian" paintings, were inspired by a photograph of herself, taken by her mother in Étretat, France, in 1959. Smolen discovered the photo in her mother's belongings after her death in 2017. The artist reflects that the "work explores memory as well as the ambiguity of nostalgia." The repetition of the basic schema of the paintings—a girl in a simple dress holding a bird—enhances the emotional impact and narrative implications of the unpredictable variations of gesture, pattern, color, and texture. March 7–April 5

This show is a loving tribute to a peaceful art warrior from Brooklyn named Richard Timperio, who owned a pioneering Williamsburg gallery called Sideshow until his death in 2018. There, according to his friend, critic James Kalm, "you'd get a chance to see things that had been marginalized or pushed out of the spotlight." Each year Timperio would have a vast Holiday show with hundreds of artists' work on view. Holland Tunnel Gallery's community-minded owner, Paulien Lethen, who was also a friend of Timperio, has a similar vision guiding her gallery in Newburgh. There are at least 130 artists in "20/20 Vision," some like Fred Gutzeit and Ken Butler from Brooklyn, and some like Theresa Gooby and Chantelle Norton from the Hudson Valley. Co-curator Judy Thomas states that "internationally renowned, mid-career, established and emerging artist works hang side by side in a democratic, salon-style fashion." Through March 29


"The Making of..." at ArtPort Kingston

ArtPort, a new art venue, has officially launched in the Cornell Steamboat Building in Kingston with its inaugural exhibition, "The Making of..." According to the gallery's press release: "ArtPort's aim is to be a destination for art experiences and unconventional interaction between contemporary art and a wide range of audiences." The 15 artists involved in the current exhibition are tasked with making this aspiration a reality. Jeilia Gueramian has answered the call with an immersively colorful installation of woven-together textiles; Miwa Koizumi has taken a gentler approach, transforming discarded plastic into elegant forms; Traci Talaso has added a scratch-and-sniff dimension to architectural elements—a memorable strategy for evoking a sense of place. Through March 29

"Bill Schuck: Your Circle My Line" at Catskill Art Society in Livingston Manor

Bill Schuck's drawing devices, constructed with industrial pumps, electronic timers, and switches, make a lot of little drops of ink, one drop at a time. Each drop falls until it hits a single point on a piece of paper, and then another falls aimed at the same point. The process repeats and gradually a dispersal pattern emerges as the targeted paper begins to undulate in unpredictable ways due to the accumulating moisture. In the exhibition, some of the devices will have completed the mechanized drawing process and some will still be dripping. The point of these machinations? It's about time. Schuck muses that, "Memories of events can be locked away in our minds. And future events we can imagine, but this moment, is fuzzier. The present experience is in some ways the hardest to know: instantly here, instantly gone." Through March 14

"Reach: A Selection of Drawings and Artist's Books by Rosaire Appel" at No. 3 Reading Room and Photo Book Works in Beacon

Basically, asemic writing is writing that doesn't mean anything on purpose. It's writing that looks like words, often laid out like words on the pages of a book, but, unlike words, refers to nothing other than itself. It signals rather than symbolizes, according to Rosaire Appel, whose delightful variations on this purely visual type of language—in book and drawing formats—are now on view at No. 3 Reading Room. Consider, for example, Appel's book not tulips (visual haiku). Loosely but skillfully rendered black marks—sometimes looking a bit like Japanese, other times looking like free form pictograms, or the work of an extremely talented cave painter—move across the book's spreads. Where are these marks taking you? Short answer: nowhere in particular, but perhaps a bit closer to pure creativity itself. Through March 29

Debra Bilow's meticulously crafted winter photographs conjure up a temperature either just above or just below freezing. There is definitely a damp chill in the air, and the snow in these pictures is not as deep as the silence. The images have a post-minimalist emptiness. Helsinki Sea No.2, 2017 is reminiscent of a Barry La Va chalk installation currently on view at Dia:Beacon. Tree Line, Wall, 2020 is pure Zen: just the tree line, just the soft brown winter grass, just the wall, and the luminous cloud of snow beyond. Through April 4 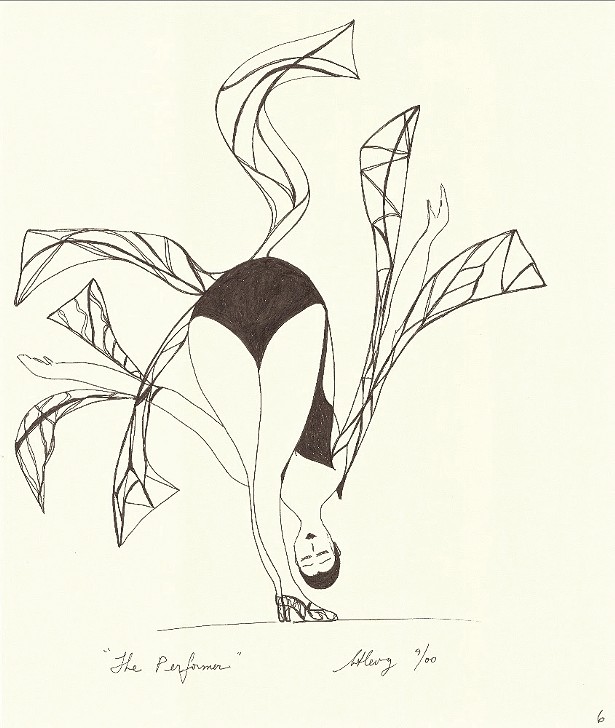 "Paper Trail: Art On and Made With Paper" at Emerge Gallery Saugerties

Gallerist Robert Langdon has assembled work by more than 25 artists for this show. Awaiting gallery visitors are examples of drawings and paintings on paper; collage; monotypes; photography; and other works containing at least 75 percent paper. Featured are a selection of abstract monotypes notable for their compositional surprises by Woodstock artist Susanna Ronner. Also look out for a somewhat-scary-but-masterfully-accomplished animal skull relief in abaca pulp, collagraph, and charcoal by Melanie dai Medeiros. March 7–29

Two artists from different backgrounds and different generations are paired in this show of portraits. Based in Chicago, Alex Bradley Cohen, in his early 30s, brings a style with components of abstraction and representation to his depictions of friends and relations. While utilizing bold color, free brush work, and compositional anomalies, Cohen's paintings are surprisingly quiet in their evocations of moments of internality during the process of dialogue. Ferrer's paintings are from the early 1980s, when he was around 50, and already a well-known artist who had recently returned to painting after years making conceptual and process-based work. His portraits, also vividly colored, lean in the direction of primitivism, with figures aggressively jammed up against the picture plane giving his works a palpable intensity. Through May 3