Comprised of 40 traditional and contemporary Chinese circus performers, the award-winning troupe Cirque Mei drops into Orpheum Center for Performing Arts in Tannersville for one night only. This traveling act has been on the road since 1976, supporting a rotating cast of 130 performers who have performed both throughout China and around the globe. From acrobats to balancing acts, contortionists to bicyclists, the impressive show of extremes is sure to make you hold your breath with terrified suspense and applaud with delight.

Hudson Valley Tech Festival brings developers from across the Hudson Valley and the New York metropolitan area together in a forum to explore technological advances and challenges. The festival will address topics such as small business development, civic/government technologies, educational technologies, open technologies, development, the cloud, and cyber-security. Featured speakers include tech community moguls such as Marva Allen, Joe Cupano, and Diana Montalion. The second day of the festival will feature the first annual Hackathon event on October 12, in which participants will collaborate to brainstorm solutions to challenges in technology that occur in government and education.

Hark, bookworms! Get your nose out of that volume and head to the inaugural Newburgh Literary Festival this October. Sponsored by Safe Harbors of the Hudson Valley, the festival will take place over three days and feature readings, workshops, and moderated discussions. On October 18, the Spring Street Reading Series will feature author Mitchell Jackson of The Residue Years. On October 19, the lineup will include readings, interviews, and Q&A panels with authors such as Molly Ringwald, Maria Dahvana Headley, Crystal Hana Kim, and Panio Gianopoulos. The festival wraps up on October 20 with two writing workshops: "How to Tell the Story of Your Life" with author Danielle Trussoni and "Surprise Yourself; Surprise Your Reader" with author Ruth Danon.

Hudson was recently ranked the sixth most arts-vibrant community in the nation by the National Center for Arts Research. Peek into the studios of the photographers, painters, ceramicists, sculptors, printmakers, and designers that make Hudson's creative engine purr during the first annual Open Studio Hudson, slated to take place over Columbus Day weekend. Over 40 local artists will participate in this free, self-guided, city-wide tour, offering you a chance to gain insight into artistic processes across a spectrum of mediums. Tours will be open from 12-6pm on Saturday and Sunday, with a closing reception to wrap up the weekend on September 13, 7pm, at Time & Space Limited.

This October, FilmColumbia celebrates its 20th year presenting world-class films to Crandell Theatre patrons and Hudson Valley residents. The event began as a small-scale local movie festival and has grown into an attraction for film buffs across the region. The lineup spans categories from documentary to feature film, short, and animated, and young adult films from a blend of international, independent, and local filmmakers and studios. Although the 2019 lineup was not yet finalized at the time of print, many of the films screened during the festival in past years went on to achieve national acclaim, such as the 2018 sneak peak of Green Book, which went on to win three Oscars and three Golden Globes. 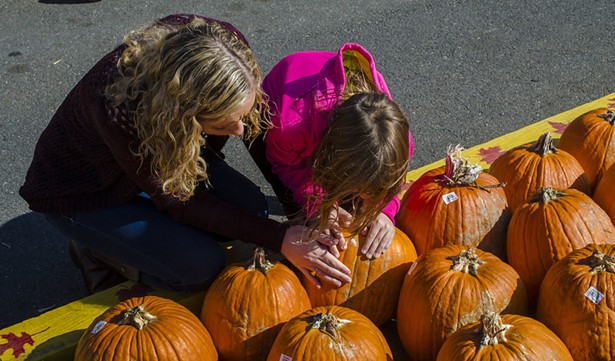 With the metastatic proliferation of "pumpkin spice" that marks every autumn, it's good to remember that once upon a simpler time this flavor came from actual gourds. Celebrate the harvest and the simpler joys of life at the annual Hudson Valley Pumpkin Festival. Put on by the Beacon Sloop Club, the event brings the bounty of fall to the Beacon waterfront for a shimmering day of pumpkin-carving, pie-eating, cider-sipping, and general merry-making. Browse fresh goodies from area farms and check out the environmental display booths, food vendors, local artisans, and craftspeople. When you've tired of land activities, hop aboard the Woody Guthrie sloop for a Hudson River sail. Free.

Chronoween, Chronogram's own Halloween bash—and dare we say the best event of the season—returns to the back room at BSP Kingston October 26. Even bigger and better than last time, this year's event, with the theme Disco of the Dead, features a live disco band and DJs, a photobooth, food from PAKT, and spectacularly spooky decor by the Halloween experts at the Barn of Terror. Don't take this event lightly, the winner of costume contest will walk away with a $1,000 cash prize. Terrify your friends with your dance moves, er, costume, and enjoy the season of ghosts with this blowout event. $20 advance, $25 at the door.

Famous for his effortlessly hilarious minor roles in smash hit comedies like The Hangover, Knocked Up, Role Models, Step Brothers, and Pineapple Express, Ken Jeong steals the show with his hilarious and eccentric characters. He has also produced and written a handful of films himself, and recently, he's returned to stand-up comedy roots with the Netflix special Ken Jeong: You Complete Me, Ho. His whirlwind tour will blow into the Ridgefield Playhouse on November 1, with opener Kevin Shea. Strap in for a night of knee-slapping laughter as Jeong recounts his life and his 180-twist from doctor to high-profile Hollywood funny man.