8 News Headlines You May Have Missed From August 2018 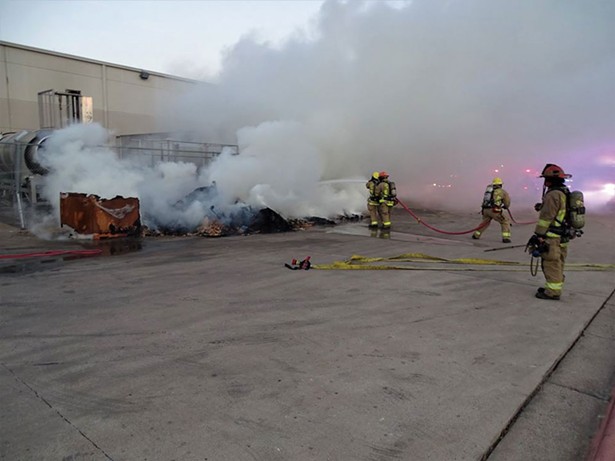 From a tortilla chip factory fire to casino losses, here's some strange headlines you may have missed from last month.

In late July, the Austin Fire Department responded to a call from a tortilla chip factory. The fire was caused by the spontaneous combustion of a new blend of tortilla chips being rolled out at the factory. The following is from the Austin Fire Department Facebook page: "Tortilla chips are big business around these parts. We take them seriously, as they are responsible for holding all manner of very important things—like queso, salsa, nachos, and various other sundry items that are critical to a Texan's everyday life and well-being. So, imagine how distressed we were to be called to a fire at a tortilla chip warehouse earlier this week." Three days later, the same brand of chips caught fire again and were again extinguished by Austin FD. The chips never made it to market.

The Battle of Gettysburg, the bloodiest battle of the Civil War, was reenacted for the 155th time this summer. It's a chance for dedicated hobbyists to blast away at each other with antique rifles and rekindle old friendships over campfire-cooked meals. Spectators paid $40 to watch nearly a dozen mock skirmishes over the course of four days. There were a few thousand people on hand this year, but that's nothing compared to the re-enactments of the 1980s and 1990s. In 1998, at the 135th anniversary of Gettysburg, there were an estimated 30,000 re-enactors and 50,000 spectators. For a variety of reasons—video games are to blame, expensive gear, growing consciousness as to the true cause of the Civil War—reenactments are in decline. "Up until the last five or 10 years, the social causes of the war did not come into what we do," said Thomas Downes, a retired machinist from Cleveland and Union reenactor. "We were paying tribute to the fighting man. It wasn't 'I'm racist and I want to glorify slavery,'" he said. "Nobody really thought a lot about the social reasons of why the South went to war."

Ayub Ali, the father of two students who survived the mass shooting at Marjory Stoneman Douglas High School in Parkland, Florida in February, was killed in an armed robbery at his convenience store, Aunt Molly's Food Store, in Fort Lauderdale in late July. Ali, 61, emigrated from Bangladesh over two decades ago and is the father of four. The suspect in the crime, Tyrone Moses Fields, 19, grabbed $500 from the cash register before fatally shooting Ali. Fields, who was easily identified by the store's surveillance video, turned himself in three days after the shooting.

Electoral history was made in August when a wave of female candidates won primaries in congressional and gubernatorial across the country, joining other candidates who had already won primaries. Victories in Kansas, Michigan, and Missouri boosted the number of female major-party nominees running for the US House to 182. The previous record was 167. In the race for governorships, 11 women are running as major party gubernatorial nominees, the highest number in history. The previous record was 10, in 1994. Women are running in record numbers in downballot races as well, like Michigan attorney general candidate Dana Nessel, who has emphasized her gender as part of her electability. "We need more women in positions of power, not less," Nessel said in an online ad. "So, when you're choosing Michigan's next attorney general, ask yourself this: Who can you trust most not to show you their penis in a professional setting? Is it the candidate who doesn't have a penis? I'd say so."

Since opening in February, Resorts World Catskills, the $1 billion Sullivan County casino, has incurred a $58 million loss in the first six months of the year. Recent financial disclosures by the casino's owner, Empire Resorts, to the Securities and Exchange Commission show the depth of the financial woes facing the new casino that is hoped to be a boon for the once-thriving tourist region. Resorts World Catskills is the largest of the four new upstate New York casinos, but it has been the worst performing one. Although it had a few stronger weeks this summer, the casino is on pace to produce about $140 million in annual revenue in its first year—about half of what it initially projected.

Last year, Governor Cuomo announced an ambitious plan to pay for college tuition for middle-class students: the Excelsior Scholarship. According to a report by the Center for an Urban Future, a New York City-based think tank focused on economic equity, the Excelsior Scholarship is not living up to its promises. Just over 20,000 students received the Excelsior Scholarship last year, or about 3.2 percent of the state's 633,543 undergraduates during the 2017-2018 academic year. The governor's office responded that the report takes into account students who wouldn't have qualified for the scholarship, such as students only taking one credit and non-New York residents. Critics still believe the state can do better. "The main problems with financial aid were repeated here," said Sara Goldrick-Rab, a Temple University professor and one of the architects behind the free college movement. "There are too many barriers, misunderstandings, lack of trust, and too many catches."

In 2016, Russian President Vladimir Putin signed a decree awarding actor and martial arts expert Steven Seagal Russian citizenship. Seagal, who is friends with Putin, has described him as "one of the greatest world leaders." Two years earlier, Seagal made headlines when he called Russia's actions in Crimea, which it annexed in 2014, as "very reasonable." In August, Russia appointed Seagal as a special envoy to improve ties with the United States. The Russian foreign ministry made the announcement on its official Facebook page, saying the unpaid position was similar to that of a United Nations' goodwill ambassador and Seagal would promote US-Russia relations "in the humanitarian sphere." No Trump/Seagal summit has yet been planned.

A study published in the journal Environmental Science & Technology Letters last month documents that air pollution is lowering life expectancy across the globe. Worldwide, outdoor air pollution reduces the average life expectancy at birth by one year. The effect is much more pronounced in some countries: It cuts the average Egyptian's life span by 1.9 years and the average Indian's by 1.5 years. For the United States, it's less, currently reducing the life expectancy of an American born today by a little more than four months on average. These findings were released just as the Trump Administration released its proposal for loosening pollution controls at coal-fired power plants. By the EPA's own calculations, the Trump administration's plan could lead to up 1,400 premature deaths annually. The damaging impact of air pollution undercuts the overall progress that the world has made in raising life expectancy in the past decades. The global average is 72 today, about 20 years longer than in 1960. Improved access to health care has been a major factor in that change. Indoor and outdoor air pollution together are directly responsible for one in nine deaths worldwide, according to estimates by the World Health Organization.