8 Hudson Valley Events to Warm Up Your February

Beethoven moved from Bonn to Vienna in 1792, a rising star for a short, sweet time. When he realized he was losing his hearing, he was horrified. He retreated to the village of Heiligenstadt,, wrote a heavy, loving "Testament" to his brothers, then decided he needed to keep on writing his music. It was right after that that he wrote his Symphony No. 3, Eroica (Heroic), a great shout of overcoming in which he discovers musical worlds within his own creative mind. If that weren't inspiring enough, there was the little matter of the French Revolution. Ludwig Van loved liberty and equality, but was disgusted with Napoleon. Come here the TON (The Orchestra Now) bring it to life for his 250th birthday anniversary on February 8 at 8pm or February 9 at 3pm at Bard's Fisher Center.

The King of the Rant returns with his 2020 standup comedy tour, "It Gets Better Every Day." (Sure it does, Lewis.) Intelligent rant is essential for survival in these curious times of ours. Count on Black to skewer absurdity, hypocrisy, and madness at every turn, in his classic cathartic style. You may even decide to join his Frustrated Union of Cynical Kindreds Universal. (Try the acronym. Then check out the work this self-declared cynic and Grammy winner does for stateless kids with Children of the Forest College Fund.) Black performs at Ulster Performing Arts Center in Kingston on February 22 at 8pm.

Vassar College is hosting Modfest, its annual arts extravaganza. Through February 9, there's a packed schedule of performances, discussions, and experiences related to this year's theme, which is "Reflect to Project," interpreted every which way by Grammy Award-nominated vocal ensemble New York Polyphony, Jeff Snyder's laptop orchestra, Tony Award-winning actress Celia Keenan-Bolger, members of the Hudson Valley Philharmonic, and faculty and students in performance.

They'll be making lots of joyful noise all weekend long at the Hudson Valley Gospel Festival, happening at the Poughkeepsie Grand Hotel and the Majed J. Nesheiwat Convention Center. Ain't That Good News offers lovers of praise music a chance to come together, explore the genre's impact on culture through history, and polish their skills. For performers and those who'd like to be, there will be breakout/workshop sessions and master classes focusing on traditional and contemporary gospel, call and response, spoken word, shedding, open voice workshops, visual arts, music directing, youth choir (ages 12-17) and drum and dance ministry, all leading up to a red carpet worship session on Sunday. You can buy full-weekend tickets and immerse yourself, or attend any or all of the concerts happening Friday and Saturday night and Sunday afternoon.

Born into an Iowa tenant farm family, Dr. James Hansen is a soft-spoken, brilliant, and persistent scientist who warned the United States Senate about climate change back in 1988. With his granddaughter and 20 other young people, he is pursuing Juliana v. United States, which asserts that the federal government is denying young people their constitutional rights through its inability to address climate change. On February 6, Hansen will speak at Kingston High School from 7-9:30pm in a "Catskill Conversation" about climate science and inaugurating the Ashokan Youth Empowerment and Sustainability Summit (YESS!). 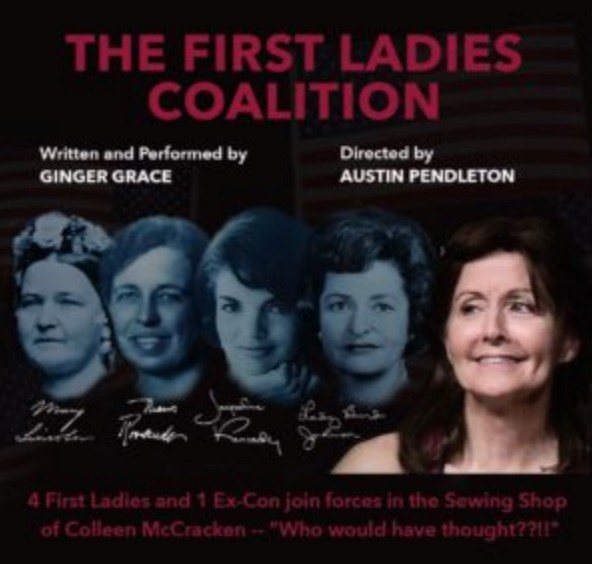 What were Eleanor Roosevelt, Jackie Kennedy, Lady Bird Johnson, and Mary Todd Lincoln like? What did they carry behind their public faces, and how did they carry it? We'll never fully know, but thanks to writer and actress Ginger Grace, we can get a lesser-known perspective. Grace was inspired to write "The First Ladies Coalition" after a national tour opposite Rich Little in "The Presidents", playing all of the first ladies, from Jackie Kennedy to Hillary Clinton. In this show, Colleen McCracken—an immigrant, ex-con, and survivor of domestic abuse played by Grace—invites us into her sewing shop and introduces us (through subtle impersonation) to the famous foursome. The show will be presented at the Bridge Street Theatre in Catskill on February 21 and 22 at 7:30pm and February 23 at 2 pm.

Denizen Theater in New Paltz is staging the regional premiere of Elizabeth Heffron's "Bo-Nita," directed by Summer Wallace, as the first show of the 2020 season. The play, a one-woman show starring Terry Weagant, follows the intellectually gifted and hilariously imaginative Bo-Nita, a 13-year-old who learns life's lessons while observing the behaviors of those around her, for better or for worse. Broadway World said Weagant "absolutely illuminated the stage" in an earlier run in New York City. Performances Wednesday through Saturday at 7:30pm and Sundays at 2pm through March 1.

Illusionist Ryan Dutcher blends astonishing magic with devastating comedy, Broadway-style production values, and intense audience engagement, combining the tradition of the Las Vegas-style illusion shows with rock-concert energy. MTV has described him as "amazing" and a Fordham University reviewer as "inspirational." If you think your sense of wonder is a thing of the past, Dutcher is out to show you that your inner child can emerge and be delighted. He grew up in Hopewell Junction, started performing at age 11, and has been touring the nation at venues great and small, so come enjoy the artist on his home turf at the Center for the Performing Arts in Rhinebeck on February 28 and 29 at 8pm and March 1 at 3pm.