Culture Booster: 8 Exhibits to Check Out in January 2020

The first month of the year, let alone a new decade, is often a time for some quiet introspection after the hubbub of the holidays and the year's end. Many people do an month-long alcohol fast to kick off the new year with clean slate (and a happy liver). If you're looking for things to do this month while you stay out of bars and away from the wine store, treat your immune system to a culture booster with these 8 local Hudson Valley exhibitions.

At 40 feet tall, Martin Puryear's Big Bling was hard to miss in New York City's Madison Square Park, where it was first exhibited in 2016. Now anchoring the South End of MASS MoCA's campus in North Adams, Massachusetts, this imposing, but enigmatic work of wood and chain-link fencing, dominates. Purposeful ambiguity is key to Puryear's beautifully crafted art. He's not in the business of pontificating, nor is he avoiding the pressing issues of our collective history. That golden shape at the apex of this structure is indeed a shackle, an emblem of slavery, overlaid with a hip-hop veneer of gold leaf; catalizing, in the words of MASS MoCA's website, "an ongoing dialogue with history, art history, identity, and politics." Through at least 2025.

A ubiquitous presence in the gallery scene centered around Beacon, Donald Alter always had something thoughtful to say about the work on view. He was a serious guy, and what he had to transmit about the work of other artists was a heady brew of long experience going back to his Black Mountain days, healthy skepticism about gimickery passing for innovation, and a genuine excitement about something that caught his discerning eye. All along, he made his own work, never staying still, always looking for something fresh, his love of color the integrating theme. The work on view at Hudson Beach Glass includes his Walmart series, reflecting his fascination with possibilities of computer drawing nurtured while he was in his 80s.

From the 1910s through the 1960s, Rockland County was home to artists who impacted the development of Modernism in the US, including Mary Mowbray-Clarke and her husband John F. Mowbry-Clark, who along with painter Arthur B. Davies, founded the 1913 Armory Show. Visiters to this exhibition will see the work of 16 artists in all, such as innovative ceramicist and painter Henry Varnum Poor, whose work is represented in the collection of the Metropolitan Museum of Art, and textile artist Ruth Reeves, who is best known for her wallcoverings for Radio City Music Hall. Fans of Abstract Expressionism should not miss the work of founding member of the New York School, Richard Pousette-Dart, who had retrospectives at the Met, the Whitney, and the Guggenheim.

Performance artist Linda Mary Montano once spent an entire year, 24 hours a day, bound by a length of rope to Taiwanese performance artist Tehching Hsieh. Later, she performed her 7 years of Living Art, 1984–1991, during which (according to the Dorsky Museum website) "she wore strictly monochromatic clothing, spent a portion of every day in a colored room, and listened to a designated tone, all of which corresponded to the energetic qualities of a specific chakra." This one evening performance at 11 Jane Street celebrating her birth will be somewhat shorter in duration than many of her famous works, bridging the gap between life and art. Included will be an Interactive Laugh-Cry, the premier of the Father Harty Drum Corps, guest preacher, BYO BDAY cake contest, one chicken dance, and a Q&A.

This group show delves into the work of nine artists taking various paths down memory lane in search of a way to make sense of the present. Gavin Christie, blessed with something like total recall, organizes his memories in categorized lists which his sister Leona re-envisions as debossed photopolymer relief prints. Steve Rein's figurative works in enamel on reclaimed wood present compositions inspired by found photographs. With titles like Hollow Prince, they suggest a complex adult view of a more innocent past. Paul Miyamoto's paintings mine his mother's memories of her parents' incarceration in Japanese internment camps during World War II. Others whose work is on view include: David Austin, Daesha Devón-Harris, Meighan Gale, Kenneth Ragsdale, and Gail Skudera.


"Heirlooms: Quilts from Another Country Quilt Cycle" at Wassaic Project

The Quilting in America website asserts that heirloom quilts "are more than just pretty bed-covers; these precious quilts carry within them connections to our personal, as well as cultural past." But what if the patches and threads weave the narrative of racism and slavery in our collective history? That is the question asked in this exhibition of not so warm and cozy quilts by DARNstudio. Each quilt is created by stitching together (according to Wassaic's site) "approximately 2,800 custom matchbooks whose covers bear logos memorializing the place where an unarmed black victim of police violence...was killed." The "Quilts from Another Country" heirlooms are passionate calls to action rather than invitations to take a nice winter's nap. 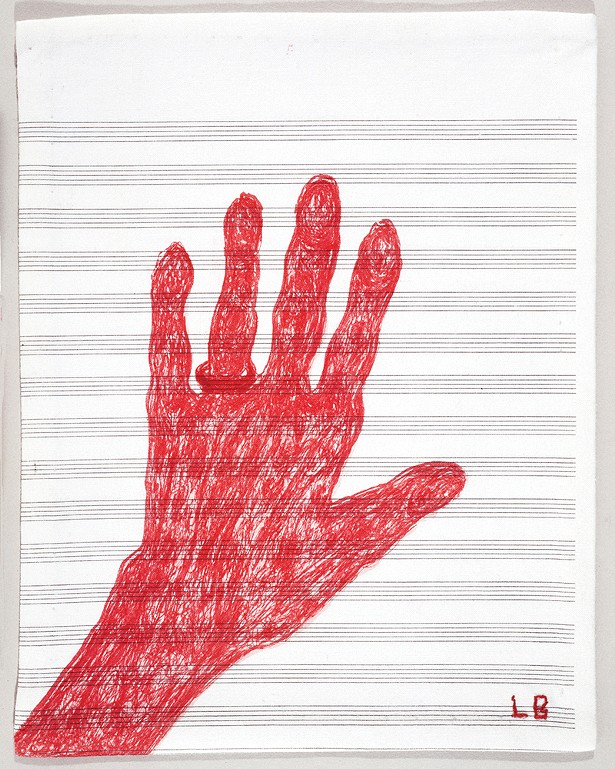 Recognized as one of the most significant artists of the 20th century, Bourgeois was still making important art well into her 90s. "Ode to Forgetting" focuses mostly on works making use of fabrics and embroidery, which manifest her career-spanning interest in textiles going back to childhood; the Bourgeois family had a tapestry restoration business in Paris. Lest this all sounds a bit quaint for an artist who made giant spider sculptures, fear not, there's plenty of weirdness in this show, often having to do with relationships. Take for example, Blue Bed from 1998 (Aquatint, drypoint, engraving, softground etching, and roulette), which does not make use of textiles, but does present a deceptively simplified scene of intimacy. Rolling waves of bedding conceal all but the heads of a couple, while pulling back from the bedside closest to the viewer to reveal an over-sized, decidedly sensual, and somewhat sinister mouth.

Contino, who at age 19 was paralyzed in all four limbs as the result of an automobile accident, was committed to making art from morning to night each day over the course of a 50-year career. He befriended Mark DiSuvero when both were patients at a rehabilitation hospital in New York City and the famed sculptor was a source of encouragement and collaboration throughout Contino's life. His wrist supported by a metal brace, Contino created a serious body of work of more than 600 pieces, over 80 of which are on view, including hard edged abstraction, collage, and sculpture. One rigorously crafted work from 1967 entitled LADY toys with the abstract language of the day. Featuring a surprising angle disrupting a centered diamond shape, this painting is an act of artistic heresy and perhaps a defiance of fate.