8 Events to Light Up your 2019 Holiday Season


The all-time classic Christmas film gets the 1940s-style radio broadcast treatment at Shadowland this month. The story was adapted by Joe Landry, whose shows, such as "Reefer Madness," "Vintage Hitchcock: A Live Radio Play," "Eve & Co.," "Beautiful, Hollywood Babylon," and "Numb," have been produced across the country. Bringing the idea to life is Executive Director Brendan Burke, who is in his 15th year of working with Shadowland Stages and has directed and/or produced over 80 shows.

Atlas Studios in Newburgh is home to over 40 creatives making everything from furniture to handmade books. It's also a cultural hub, hosting readings and concerts in its gallery space. For the second year, Atlas will be opening its doors for a holiday market, featuring regional jewelry, pottery, fabric goods, holiday wreaths and flowers, and farm-distilled spirits, including businesses such as Loopy Mango of Beacon, Old York Farm of Claverack, Beacon Bee, and Garny & Co of Sparrow Bush.

Newburgh is known for the historical significance of its original period homes as well as its revitalized new developments, and the Historical Society is sharing these architectural gems with the public in their Candlelight Tour of Homes. Thirteen seasonally decorated homes will be toured, featuring mansions, homes in rehab, new developments, period homes, and important landmarks of the city. 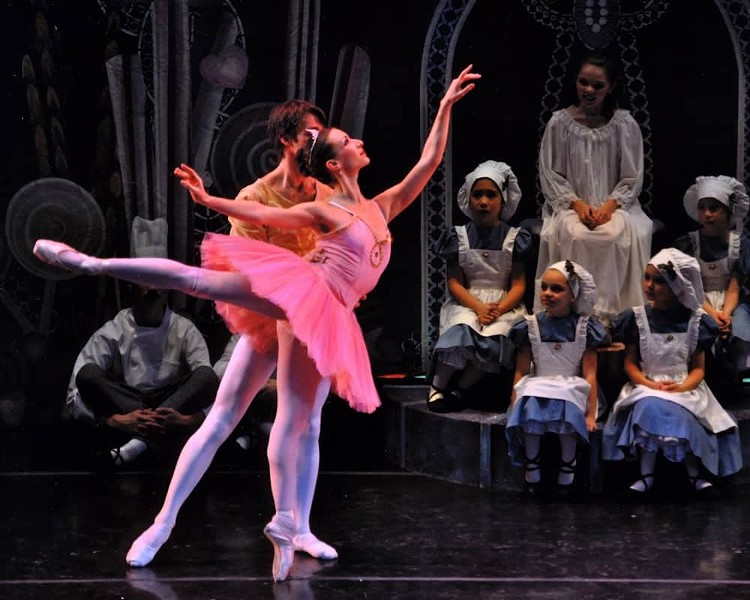 A staple of the holiday season, "The Nutcracker" is performed by companies large and small all over the world, with the nefarious Mouse King vanquished again and again. This month, Catskill Ballet Theater and New Paltz Ballet Theater are staging their annual productions, with students and professionals performing side-by-side. Catskill Ballet Theater performs at UPAC in Kingston, December 13–15, featuring guest artists from Dance Theatre of Harlem. In its 22nd season, the New Paltz Ballet Theater is codirected by Peter Naumann and Lisa Chalmers-Naumann and works with artists across the region. It features dancers from the New York City Ballet in its production at the Bardavon on December 12–13.

"A Christmas Carol" at the Center for Performing Arts at Rhinebeck

Funny how a book about a miserly old man from the mid 19th century has become a holiday favorite of the stage and screen. Charles Dickens's tale of the redemption of Ebenezer Scrooge returns for its 14th year at the Center for Performing Arts at Rhinebeck in an adaptation by Lou Trapani. Directed by Diana di Grandi, with music by Paul and JoAnne Schubert, the show features the fan-favorite regular actors of the Center. The final night of the show, December 22, will also serve as a fundraiser for the Center, with a sing-along, food, and special guest appearance by Santa.

Hark the Horns at Avalon Lounge in Catskill

The brass showcase of the season, Hark the Horns features three New York State brass bands from 8 to 11pm at The Avalon Lounge. Brass Queens of New York City are an all-female group, challenging the gender norms of the genre and playing classic hits by female artists. Brasskill is a play-everything-and-anything brass band out of Hudson. Pontoon has a new sound to surprise audiences—using traditional instruments to create warped versions of what the genre is considered to be.

American Dharma at TSL in Hudson

Check for dates and times

Errol Morris is an idiosyncratic filmmaker. His most challenging recent work has investigated men tangled up in epochal historic moments—Robert McNamara in The Fog of War (2003) and Donald Rumsfeld in The Unknown Known (2013)—in a one-on-one interview format. Morris has now turned his attention to political provocateur and one-time Trump svengali Stephen Bannon. Morris questions Bannon about his morals, his ideas on President Trump, and the films that have helped to shape his life. (Bannon's favorite flick: 1949's Twelve O'Clock High, starring Gregory Peck as a hard-as-nails general who must pull together a fighting crew with morale problems.) His latest film screens at Time and Space Limited in Hudson.

Brain Storms at the Beverly Lounge in Kingston

Brain Storms is a six-hour spoken word and performance extravaganza featuring over 100 performers from all around the Hudson Valley. From 2 to 8pm, poets, writers, and musicians will all be center stage for the event, as well as willing audience members during an open mic session. Poet Bruce Weber produced the event based off of a similar event he ran in Manhattan from 1995-2019. He brought Brain Storms to Kingston to create opportunities for Hudson Valley artists.