What to order: We're longtime fans of the Phoenicia Diner's breakfast skillets; they're switched up seasonally but have never disappointed. The farmers' skillet ($12) comes with smoked bacon and their perfect rustic home fries, which they've given the fancy title of "Phoenician potatoes," served in a delightful (and highly Instagrammable) mini cast iron.


Allyson Merritt and Andrew Spielberg, owners of Gracie's, have an unexpected (for the diner world, at least) traditional food background—the two met as students at the Culinary Institute of America. Merritt was a pastry chef. Spielberg was working as a cook at Fleisher's in Kingston in 2012 when the butcher shop decided to move production to Brooklyn, "a place neither Ally or I could ever imagine living," Spielberg says. They decided to strike out on their own. "We got the idea to test our recipes at a couple of farmers' markets," Spielberg explains. "We set up a Weber grill and put a cast-iron skillet over the coals, and that's how we cooked our burgers for the first year and a half."

This gig allowed them space to perfect their from-scratch recipes—for ketchup, bacon, cheese, and more—but the income was paltry. "When Ally found an ad for a food truck, we both agreed this was what we needed to get our business going," Spielberg recalls. Thankfully, the response from customers was overwhelmingly positive, and they quickly gained the confidence to make the leap to a brick-and-mortar. The former Borcsht Belt-era Koch's Drive-In, which had stood empty since 2010, was the perfect place.

In addition to the expected homemade items, like soups, meatloaf, and gravies, they bake their own biscuits and buns, craft their own condiments, cure their own bacon, smoke their own lox, and have even developed their own artisanal sodas. "Everything we make at the diner is a specialty in some way," Spielberg says. The convergence of hyper-fresh sourcing and a dedication to laid-back approachability makes this little eatery a pleasure to frequent.

What to order: Steak at a diner? Yes—at this diner, at least. Theirs is flavorful, grilled, dry-aged pastured beef from nearby Pine Plains ($22). And don't leave without trying one of their housemade donuts (price varies); our favorite is the maple bacon. 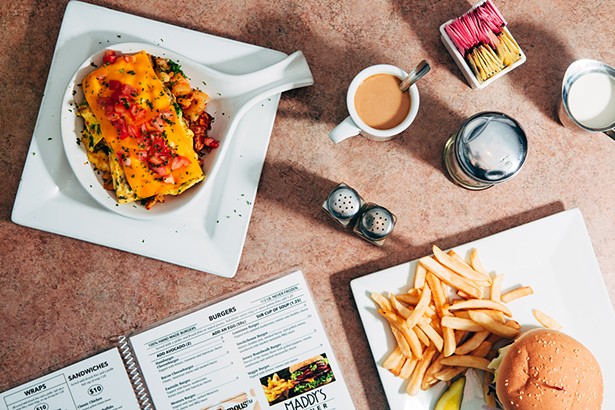 
When Franco and Paula Fidanza bought Maddy's in 2012, it had a storied past. Feeding the community in that location since 1950, the diner survived a fire in 2006 and was renovated in 2007, but then closed again in 2010 amidst financial troubles. "I was a customer of Maddy's for many years before the fire," Franco says. "When the opportunity became available to take over and continue the tradition, it was a no brainer for me."

Franco, who founded the Planet Wings franchise and has been in the restaurant industry for 17 years, wanted to honor Maddy's long history when he reopened and maintain its particularly local flavor. That feeling is obvious from the moment you walk in—smalltown small talk about sports, weather, and local politics can be heard at the counter, and staff and customers trade familiar banter. Three years ago, when a regular won $10,000 in the lottery playing numbers recommended by his waitress at Maddy's, he split the winnings with her—that's just the kind of tight-knit community that revolves around this diner.

The vibe hasn't changed much, and neither has the menu. Maddy's serves up classic American homestyle diner cuisine: breakfast, burgers, fries, and shakes.

What to order: Go for the classics. Try a burger and fries ($8)—here, they're juicy and perfectly cooked—with a Nutella and peanut butter milkshake ($5.50) on the side.

20 Spots to Find Cheap Eats in the Hudson Valley