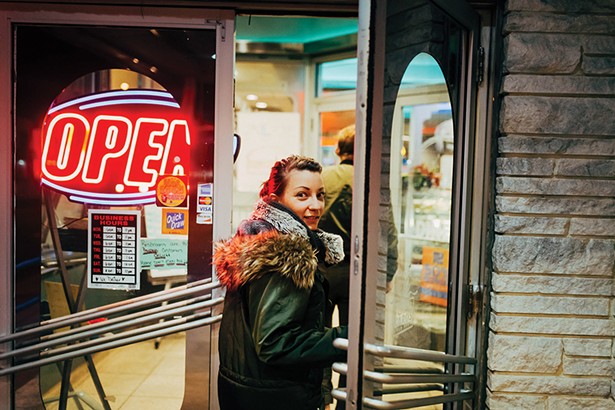 We've been diner lovers since the beginning (Tom is from New Jersey, I'm from Long Island—we were basically born in diner booths). In 2013, we started Diner Porn, a blog-turned-book, as a way to document the American diner experience through photos and vignettes. Six years and nearly a hundred "professional" diner meals later, we've learned some things: namely, that when it comes to diners, nostalgia and personal loyalties reign supreme. You may love your favorite diner because they cook their hash browns to your preferred level of crispness, or because you visited often as a child; because the wait staff is particularly warm (or, depending on your preferences, particularly sassy); because you can get a hearty breakfast for under $8; or, often, because they happen to be down the street and open 24 hours.

What's objectively true is that good diners come in different flavors. "Foodie diners" go above and beyond the typical burger-and-fries or breakfast fare, offering some new and creative. "Historic diners" are charming relics of a predigital era, with antique typewriter-style cash registers and original countertops with wear from thousands, if not hundreds of thousands, of coffee cups and resting elbows. And "people diners" are most important for the role they play in the community: that of a gathering place, where neighbors are greeted and news is exchanged.

Good diners fit at least one of these descriptions and a select few, like our Hudson Valley favorites below, check two or even all three boxes. 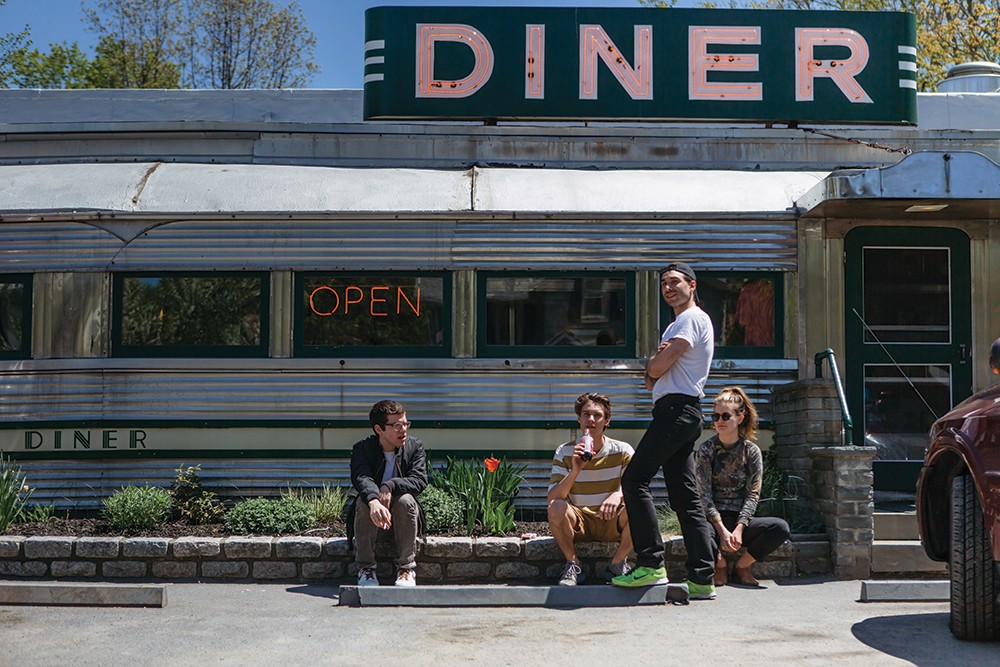 
A classic 1950s train-style dining car, the chrome exterior of the Village Diner is a throwback to its earlier form, the Halfway Diner—so named for its previous location in Rhinebeck, halfway between Albany and New York City. The diner now holds a place on the National Register of Historic Places, a recognition earned by current owners Arleen and Sam Harkins. They used to meet often at the diner before commuting to work for corporate America, Arleen Harkins explains, and when the diner went up for sale, it was the impetus they needed to make a life change. "We wanted to do something totally different," she says, and the diner was just that. They took the leap, and they've now been there for 36 years.

Today, the diner is run by the Harkinses alongside business partner Melissa Wambach, who started as a dishwasher at age 14. It gained a bit of fame when Arleen made a 2017 appearance on a diner-focused episode of the food competition show "Chopped," but at its core, it's a neighborhood institution. They've had people get engaged there and they've even hosted funeral receptions for the families of patrons who called the restaurant a second home. "We have people who come for breakfast, lunch, and dinner, seven days a week," Arlene says.

What to order: Try the hearty, tangy Reuben soup ($5.75); it's everything that's great about the sandwich, without the bread. Their fried pickles ($5.50), lightly breaded, crispy, and served with addictive horseradish sauce, are perfect on the side. And leave room for a house-made dessert, like their enormous homemade sticky buns ($3.95).


Elizaville Diner proprietor Brian Pitcher is no stranger to the diner world. His mother was a diner waitress, and he started working as a dishwasher at age 13, growing up amidst the "hustle and bustle." "It was my first job and it will be my last job," he says with a laugh. After selling his previous venture, the West Taghkanic Diner, in 1997, Pitcher and his business partner Dale Strong were on the hunt for a new project. A friend alerted them to a diner in Lebanon, Pennsylvania, that was about to be demolished—the lot it was on had been sold and the diner had to go.

When they first visited, the original dining car was barely visible beneath exterior paneling. "It looked like an IHOP," Pitcher recalls. But what they found underneath was one of a kind: a 1951 dining car. They moved the diner, along with some of the original tables and stools, which the previous owner had removed but thankfully saved, to Elizaville, where it's lived, as an iconic time capsule of mid-century America, since 2007.

What to order: Hungry? Try the blue-ribbon breakfast plate special ($8.99), which comes with a little bit of everything, cooked your way: home fries, eggs, bacon or sausage, toast, and pancakes or French toast. "That's everybody's go-to, breakfast, lunch, and dinner," Pitcher says. As for him? He likes a simple spinach and feta omelette with an English muffin and home fries, well done.


The Vanikiotis family has been in the diner business for almost 40 years, beginning in 1981 when they first emigrated to the United States from Greece. Nicholas Vanikiotis, owner of Fishkill's Red Line Diner, is following in the footsteps of his father, uncles, and grandfather, but he's also stepping up the game. Red Line, which opened in 2012, is less "greasy spoon" and more "retro American sleek." The architecture was based off the nostalgic look of classic diners—chrome, neon, and cozy booths abound—but it's decidedly modern, bright, and clean.

Red Line strikes the same balance between comfort and creativity with its menu. They offer the classics, like a patty melt blue plate special ($11.95), but aren't afraid to try items you wouldn't expect from a diner, like their pan-fried dumplings ($9.95) and slow-roasted BBQ pulled pork sliders ($9.95). They've elevated the food quality by using local ingredients whenever possible (they work directly with local farms) and focusing on freshly prepared options.

And if the line out the door on weekend mornings says anything, it's that they've found a way to please pretty much everyone.

What to order: Fluffy buttermilk pancakes ($6.50) are great any time of day. But the diner's unexpected specialty is classic New York cheesecake ($5.75), found front and center in the bakery case. The family recipe, passed down by Nicholas's father, is heaven on a fork, and served in oversized slices perfect for sharing. 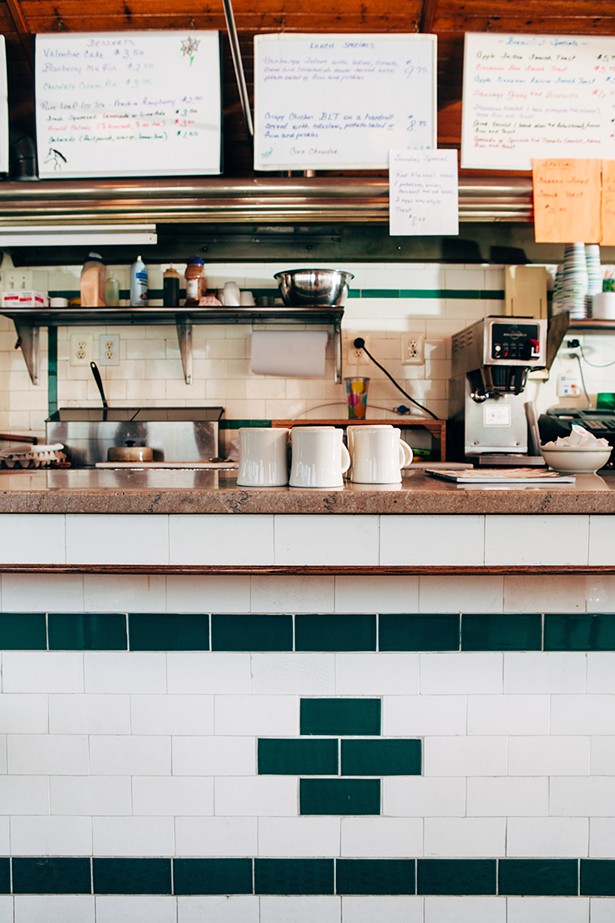 
Dan Rundell was not particularly interested in diners—or even owning a restaurant—before he bought this Chatham establishment. He worked as a mason and in his free time enjoyed restoring old cars and trucks to their previous glory. So when he found the 1920s dining car that would later become Dan's Diner advertised for sale in Connecticut, he approached it as another fun project. "I thought it was neat," he says. "It was in pretty bad shape. I didn't think I'd ever get it done."

And it wasn't easy. Rundell spent 12 years renovating the restaurant, poaching parts—like counters and tile—from similar diners that were being sold and antiquing for stools and other decor. The result is a sparkling clean, historically accurate approximation of what the dining car would've looked like over 50 years ago.

Today, the diner serves a smattering of local regulars along with a regular influx of weekenders and summer tourists at 18 stools and a seasonal backyard patio. Rundell, his wife, and his daughter-in-law manage the grill, where they cook up breakfast and lunch basics along with some creative limited-time specials, like their Red Flannel Hash ($8.00) with corned beef and beets.

What to order: The Hot Mess ($7.95)—a zesty plate of peppers, onions, ham, cheese, and home fries scrambled into eggs—is sure to keep you full till lunch.


If cheap, fast, and greasy is what you're looking for, Phoenicia Diner might not be the right pick. Since opened in 2012, it's garnered a dedicated following of hip Brooklyn weekenders and trendy transplants. On Saturday and Sunday morning, the line can trail out the door. But if you can stomach the wait, you'll understand what all the fuss is about: Phoenicia Diner is absolutely a foodie diner.

The diner had been serving customers for almost 50 years when Mike Cioffi, a Brooklyn native and long-time Margaretville weekender, bought it in 2010. He spent two years renovating, focusing on removing the drapes, drab colors, and other '70s trappings the diner had accumulated over the years. The result is a hip and streamlined interior with a menu to match. The diner team, led by general manager Courtney Malsatzki, recently hired Chef Merrill Moore, who is also responsible for the new menu at nearby Mama's Boy Burgers and previously of destination restaurant Hartwood in Tulum, Mexico.

About 15 percent of the menu changes seasonally, a testament to the diner's dedication to local food. One example is the Catskills trout that's central to several breakfast and lunch options, including smoked trout on a bagel with scallion cream cheese ($11) and the Catskills po'boy topped with remoulade ($14). And they increased appeal even more by opening The Lot, a food truck that lives in an Airstream trailer next to the diner. In addition to casual outdoor seating and live music, The Lot offers coffee and pastries—perfect for those who need something to tide them over while they wait for the full Phoenicia Diner experience inside.

20 Spots to Find Cheap Eats in the Hudson Valley