8 Places to Eat Oysters in the Hudson Valley 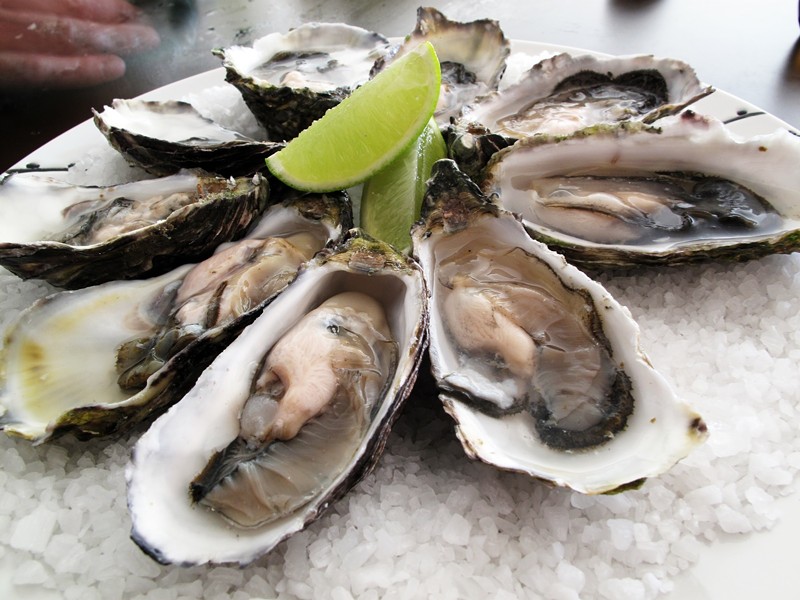 Oysters are a quintessential and historic Hudson Valley food. In 1609, when Henry Hudson sailed up the river there were 220,000 acres of oyster reefs in the New York harbor. This vibrant oyster population was a major food group and commodity for the local Lenape tribes, who introduced Hudson to the crustacean somewhere around in modern-day Yonkers.


By the 19th century, the millions of oysters were being loaded into barges on the New York City waterfront every year and shipped upriver, down the coast, and around the globe, earning the harbor its handle as “oyster capital of the world.” These molluscs became an essential staple of every occasion from a workingman’s pub grub to a black-tie banquet.


Old folklore has it that you should only eat oysters in months containing the letter R, i.e. (fall through early spring). This advice harkens back to the days of wild-harvesting and factors like spawning season and the red tide. Today, 97% of oysters are farmed and can safely be eaten year-found. That said we love a good tradition like winter feasting on these little gems, and Hudson Valley chefs are up to the task of shucking.


Plus, the beloved crustacean with the deservedly sexy reputation (it’s said that Casanova ate 50 for breakfast every day) is a powerhouse of proteins and minerals, Zinc and amino acids probably do boost the libido — or is it the exquisitely delicate folds and the sensuality of the classic slurping experience? Nobody knows for sure. What’s certain is that oysters are a special kind of peak food experience. Slurp your way to brackish bliss at these tried and true Hudson Valley restaurants.

Where to Eat Oysters Upstate


Oysters are firmly embedded in the history of Boitson's in Uptown Kingston; founder Maria Phillipis used to serve them to her benefactor, Alexander Boitson, in her family’s Long Island restaurants back in the day. Get them on the half shell from the raw bar, or order a batch fried. Enjoy the laid-back vibe and the exquisite selection of “lubrication.”

A favorite of locals, every Thursday is Oyster Night at Silvia in Woodstock, where the $1 oysters pair beautifully with the bottled wine special (25% off the bottle of your choice). Can’t make it out? Order the daily selection at market price any day of the week, with housemade cucumber mignonette. They’re sourced with the same exquisite care as the restaurant’s exquisite greens and grass-fed beef.

The romantic French charm of Le Petit Bistro in Rhinebeck amplifies the life-giving benefit of the oyster. Constantly rotating, market-driven specials emphasize the freshest and finest shellfish. Oysters are available on the half-shell or crispy fried with a cucumber salad and tobiko mayo for a Japanese twist. Head here on Oyster Wednesday, for $1 oysters, $4 pints, and $6 sparkling from 5-6:30pm.


At Blu Pointe, a high end seafood restaurant on the Newburgh waterfront, five different varieties of oysters are offered with Riesling Mignonette or Bloody Mary sauce as part of the upcoming Valentine’s Day menu—Blue Point, Duxbury Island Creek, Wellfleet, Kumomoto and Kusshi. Head to the waterfront for “Prime Time” Happy Hour from 4-7pm, Monday through Friday, featuring $1 oysters from the raw bar.

At Fish & Game in Hudson, chef Zak Pelaccio’s award-winning food program pairs impeccable sourcing with creative simplicity. The oysters, served with house-made condiments, are no exception. You can order raw oysters with fermented chili liquid or roasted oysters with kimchi hollandaise and enjoy on a lush leather couch, while the firelight from stone hearth reflects on the gleaming dark wood interior.

Flatiron American Restaurant and Bar in the center of Red Hook is a top-notch steakhouse where the focus is on fresh; CIA-trained chef Craig Stafford has over 20 years experience in restaurants and his wife Jessica Stingo has over 20 years of expertise in wine. They serve fine raw oysters with a house-made stout mignonette.

Veterans of Brooklyn stand-outs Diner and Marlow & Sons, Gaskins owners Nick and Sarah Suarez have brought urban chic to country dining, with a menu focused around locally sourced and seasonally inspired comfort food. While not a part of the regular menu, true-blue wild-caught oysters sometimes cameo on the specials board and go down smooth a drink off the craft cocktail menu or natural wine list.

Circa 1883, the tavern at The Stewart House, a luxurious 9-room inn in Athens, is open Thursdays through Sundays, with CIA grad Bob Turner at the helm of a locally sourced menu. Head over between 3-5pm for cocktail hour, which has a bar menu including $2 oysters (most recently sourced from Wellfleet, MA), and artisanal drinks. Dinner service starts at five.