Get Your Annual Garden Inspiration at these Meccas of Horticultural Expertise

Watching the natural world come alive after a long snowy winter is enough to melt even the Scroogiest of hearts. It seems like every day a new bush is blooming, a new tree flowering, volunteers popping up unexpectedly, and perennials making their reliable return. While our own yards and neighborhoods are the backdrop for a spectacular and shifting display, the region is rife with examples of horticultural mastery that offer a different view each season. There is nowhere better to revel in the glory of spring, the lushness of summer, or the drama of fall in the Hudson Valley than the many public gardens in the region. Whether you’re going for a meditative stroll or a romantic picnic, here are eight of our favorite public gardens in the region.

The word paradise comes from the Greek for walled garden. Indeed, paradise is what Blithewood Garden at Bard College is—in all senses of the word. A traditional walled Italianate garden, designed by Francis L. V. Hoppin at the turn of the 20th century, Blithewood is perched 130 feet above the Hudson River, with breathtaking vistas of the water and the Catskills beyond. Designed to complement a manor house on a historic estate, Blithewood is now a 45-acre section of the Bard College campus that includes outbuildings, drives, lawns, meadows, fountains, and formal gardens, which have been rehabilitated over the past 5 years in collaboration with the Garden Conservancy. The destination is a typical example of Beaux-Arts style: paths on geometric axes, symmetrical design, a central water feature, and statuary. The focal point of the formal garden is a copper-roofed gazebo flanked by two wisteria-covered pergolas. Admission is free; self-guided walking tour brochures are available at Blithewood. For a staff-led group tour, contact the Arboretum office at arboretum@bard.edu at least two weeks in advance.

The sprawling 165-acre Innisfree Garden in Millbrook was designed by landscape architect Lester Collins over the course of 50 years with contributions by his mentor, the artist and teacher Walter Beck, and gardener/heiress Marion Burt Beck. With rock, water, and wood features, the garden bridges the Mid-Century Modernist and Romantic principles of the West with traditional Chinese and Japanese garden design principles. Recognized as one of the “world’s 10 best gardens,” Innisfree offers a peaceful respite from the chaos of the world. In her lifetime Marion Beck planted thousands of heirloom daffodils and shadblow serviceberries at Innisfree, which are the earliest blooms in the garden. The garden is open to the public May 1, 2, 8, and 9, with special Mother’s Day tours on Sunday May 9. Beginning May 12, the garden will be open to the public Wednesday through Sunday and legal holidays. Admission is $10 for adults, $5 for children. Pre-registration is required.

Part of the Franklin D. Roosevelt National Historic Site, Bellefield Mansion is the former abode of early 1900s State Senator Thomas Newbold and his family. Newbold hired his cousin the master gardener Beatrix Farrand to design a garden for the estate in 1912. By the time she began work at Bellefield, Farrand had already earned acclaim as a groundbreaking horticulturalist. The garden at Bellefield was designed so that the mansion's French doors opened to a terrace leading into 3,000 square feet of hemlock hedges, walled perennial borders, seasonal blossoms, walking paths, and a wild garden beyond its gates. Though the garden was not preserved when the home was donated to the National Park Service in 1957, at the turn of the 21st century, the Beatrix Farrand Garden Association formed to rehabilitate the plot and preserve her legacy. The restoration effort has led to the planting of many of Farrand's signature plants like bulbs, iris, peonies, phlox, and aster. Admission is free to the public.

A post shared by Beatrix Farrand at Bellefield (@beatrixfarrandgarden)

If you found a nonprofit called the Garden Conservancy, it’s a pretty good bet that your home gardens are on point. Located in the Hudson Highlands above Cold Spring, Stonecrop Garden was originally the home of renowned horticulturalist Frank Cabot and his wife Anne. Made public in 1992, the 15-acre garden is smaller than some of the other properties on this list, but no less a worthy destination. A glass conservatory sits pondside amid a lush landscape that showcases Cabot’s talent creating texture and visual interest, pulling from a wide range of plant species. The property spans woodland and water gardens, grass gardens and rock gardens, and an English-style flower garden. Stonecrop is open to non-members Monday, Wednesday, Friday and Saturday, with a reservation required. Admission is $10 for adults, and $5 for children 3-18. 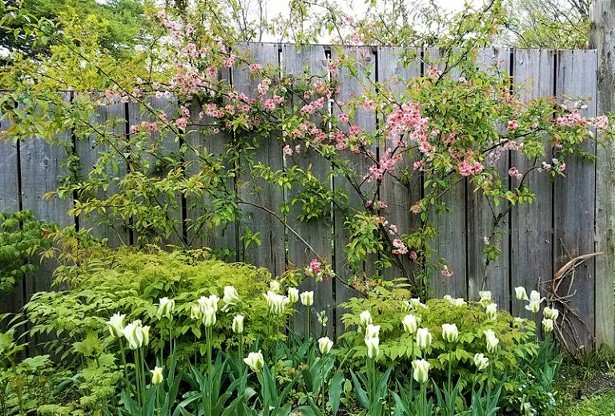 Like many of the wealthy estates of the landed gentry, Locust Grove in Poughkeepsie is perched on a hill overlooking the Hudson. After William and Martha Young purchased the Italianate estate Locust Grove in 1895, they began adding onto the property, purchasing adjoining lots along the river and building carriage roads. This tradition of expanding the estate’s footprint has continued into present day under the property’s nonprofit trustees, and now Locust Grove has nearly 200 acres of grounds and formal gardens, including a historically accurate cutting garden and a kitchen garden for fruits and vegetables. The mansion, which is normally open for guided tours, is currently closed to the public due to COVID, but the gardens are accessible daily from 10am to 5pm, and the miles of hiking trails reopen to the public for the summer season on May 1.

Longtime summer home of the Hudson Valley Shakespeare Festival, Boscobel House and Gardens offers stunning vistas of Constitution Marsh, the Hudson River, and West Point Military Academy. After the Federal-style home was saved from demolition in the 1950s and subsequently restored, historically appropriate grounds were designed to surround the mansion. The 68-acre property features lush gardens with formal hedges, fountains, raised beds, flowering trees, shrubs, flowers and herbs. The formal English rose garden, designed with beds emanating as spokes from a central fountain, features over 600 rose bushes. There is also an herb garden, an orangery, a terrace garden, and a ravine garden, which is planted primarily with native Hudson Valley species. Admission is $12 for adults, $6 for kids.

A post shared by Boscobel House and Gardens (@boscobelhg)

While many of the gardens on this list implement a more manicured style with imported and cultivated plant varieties, the Mountain Top Arboretum, situated at 2,400 feet of elevation just outside of Tannersville, is a 178-acre public garden dedicated to native species. Trails and boardwalks offer easy access to 35 species of wild trees and the native plantings that thrive with them. The property has four main areas: West Meadow, Woodland Walk, East Meadow and Spruce Glen. West Meadow is where you'll find the Bird Cove (although the entire property is a birdwatcher's paradise, harboring about 60 species) and a spiral labyrinth of native grasses. Along Woodland Walk, you'll encounter wildflowers, mountain laurel, a natural amphitheatre, and the Fairy Garden, where children are invited to create houses, forts, and gardens for the wee mythical residents using natural materials. The Spruce Glen walk takes you past the large Hidden Marsh and the ancient Emerald Bog. The East Meadow offers 10-acres of mowed paths and boardwalks that pass through wild blueberry bushes, past pines, along hedgerows and through a thriving wetland. There is a $5 suggested donation.