On July 28, the good folk of the Warwick Historical Society will be giving tours from 2-4pm. You'll see a new ag exhibit, newly acquired Civil War trunk, and the 1764 Shingle House. And anytime you visit Warwick, you can download the Warwick Walking Tour app and get schooled. Meanwhile, here are some of the seminal moments that shaped this epic place. 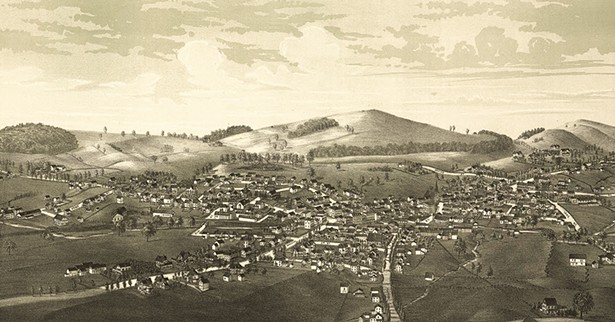 1750: In an effort to keep the Colonial upstarts in line, the British Crown passes the Iron Act and decrees that colonists must shut down most of their iron forges. The Iron Act met the iron will of Lawrence Scrawley, who had opened his tilt-hammer forge at Bellvale in 1745. Scrawley refused to close, and the Brits destroyed the forge. Not quite 30 years later, the ironforgers of Warwick would gather at the Secret Forge and craft the Great Chain. Each 24-inch link weighed about 114 pounds. Stretched across the Hudson on April 30, 1778, the Great Chain made the channel impassable to Redcoat warships.

1835: General George Duncan Wickham digs a drainage canal, and the black dirt of the Drowned Lands emerges. Previously, the area had been a lake and Pine Island an actual island. You could graze your cattle herd there, but if a storm hit they'd likely drown. It wasn't until Eastern Europeans arrived from Poland and Germany around 1880 that the Drowned Lands were coaxed into producing tons of onions. The great granddaughter of one of those farmers, Cheryl Rogowski of Pine Island, was named Onion Princess in 1983 and a MacArthur Genius in 2004 for "reinventing the role of the family farm in America."

1845: English poet Henry William Herbert, also known as Frank Forester, publishes The Warwick Woodlands or Things As They Were There Ten Years Ago. "In all the river counties of New York there is none to my mind which presents such a combination of all natural beauties, pastoral, rural, sylvan, and at times almost sublime, as old Orange, nor any part of it to me so picturesque, or so much endeared by early recollections, as the fair vale of Warwick...May blessings be about you, beautiful Warwick; may your fields be as green, your waters as bright, the cattle upon your hundred hills as fruitful, as in the days of old."

1860: A charter is granted to the Warwick Valley Railroad, an eleven-mile branch of the New York and Erie that connects the heart of Warwick Village to Greycourt, and thence to New York City. Previously, Warwick's farmers and makers had to trek 30 miles by wagon to the river at Newburgh. Previously, the Village of Warwick had been but a face in the crowd, no more inherently exciting or successful than Amity or Eden. The railroad changed all that, becoming the first ever to transport milk in refrigerated cars, and leaving behind a groovy 1893 depot.

1933: The New York State Training School for Boys opens its gates (on the grounds of what would later become the Mid-Orange Correctional Facility). The school replaced the hellish conditions at Randall's Island with a farm, a woodshop, and cabins. Franklin and Eleanor Roosevelt were believers in the curative powers of sunshine, good fresh food, and mentoring, and for a couple of decades the school had the resources to be a pretty decent place.

The best known alumni is Claude Brown, author of Manchild in the Promised Land, who observed that the place made boys better criminals but ultimately managed to use it as a stepping stone on the way to Howard University. After a few decades as an adult prison, this lovely slice of the valley has been reimagined as a place of health, pleasure, and prosperity.

2001: The Town of Warwick Agricultural and Open Space Preservation and Acquisition Fund is established to purchase the development rights for farmland that comes on the market, in order to preserve the historic agricultural landscape and farming industry in Warwick Valley.

2010: Village of Warwick gardeners and beautification experts enter the village in an international "Communities in Bloom" competition for the prettiest village in the world and take first place, bringing a lovely trophy home from Nova Scotia just in time to brandish it at the front of the community's Halloween parade. Organizers of the group Warwick in Bloom, having led Warwick to floral victory at both national (2003) and global levels, do not simply rest on their laurels (or in their hanging baskets.) They tend over 80 portable planters every year and work to fund more historical signage and nifty lanterns to maximize Warwick's cute factor.