Tillman, a writer in residence at the University at Albany, was shortlisted for the National Book Critics Circle Award for her novel No Lease on Life and is a Guggenheim fellowship recipient. At a sprawling 416 pages, Tillman's latest novel covers a lot of ground, capturing the wild musings of the book's protagonist, cultural anthropologist Ezekiel Hooper Stark, and touching on such various subjects as pet pictures, spirit mediums, discarded images, and the nature of contemporary masculinity.

Following the success of Hunt's haunting 2016 novel Mr. Splitfoot, Tin House is re-releasing The Seas, the Hudson Valley-based author's largely overlooked first novel. As in her subsequent books, The Seas is part fairytale, part bildungsroman, part picaresque adventure. The unnamed narrator is a young woman in a coastal town so far north that the highways only run south. She's in hard love with an Iraq War veteran and may or may not be a mermaid. Hunt pulls readers into an undertow of impossible love and intoxication, hope and delusion, sanity and madness. Hunt reads at Oblong Books in Rhinebeck on July 10 at 6pm. 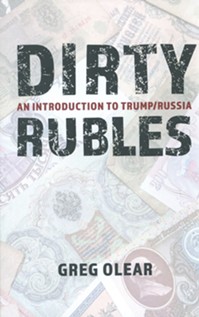 Dirty Rubles: An Introduction to Trump/Russia

The first line of the preface tells you all you need to know about this New Paltz-based author's intentions: "Trump/Russia is the greatest political scandal in American history." Olear, author of Fathermucker and founding editor of digital literary magazine The Weeklings (for which he wrote this book in dispatches beginning with the 2016 election) attempts to create a coherent narrative of the machinations of Trump and his cronies as it continues to unfold. A useful primer for the uninitiated. Olear reads at the Golden Notebook in Woodstock on July 3 at 6pm.

How much does the past define us? What's the price of trying to break free? The latest novel from Kleine, a part-time Columbia County-resident, follows two sisters, Eden and Hope, who must confront a dark incident from their past, decades later, in an attempt to answer those questions. Eden is that rare bird of a book that manages to be both a page-turner and a moving and stark meditation—on sisterhood, violence, trauma, memory, and how a single event can shape a life. 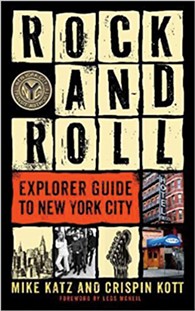 Chronogram contributor Kott teams up with music obsessive Mike Katz for this chock-a-block resource for finding the former homes and haunts of rock legends. The recollection of group sex by rock journalism legend Legs McNeil in the foreword is worth the price of admission by itself: "I thought I wasn't being kinky enough, so I dumped maple syrup over the two girls during the sex and ended up glued to the sheets in the morning." Browseable by neighborhood, with call-outs for iconic hometown acts like the Ramones, Madonna, and the Beastie Boys.

The Hudson Valley & Catskill Mountains: Only the Best Places

Former Hudson Valley magazine editor and local know-it-all Joanne Michaels has released the 10th edition of her authoritative resource, billed as a "guide for discerning travelers, families, and local residents." Think of the book as a Lonely Planet for the 10-county Hudson Valley region—with restaurant, entertainment, recreation, and lodging information and recommendations—with Michaels as your knowledgeable, chatty tour guide. A useful volume to keep in the car's glove compartment for consultation on impromptu road trips.