Vassar professor Kumar, a keen observer of the contemporary American immigrant experience, introduces us to recent Indian transplant Kailash in his second novel. Wide-eyed but not naïve, Kailish tells his story of discovering America through seven romantic encounters from New York City to Montana and back again. His memories of lovemaking are interspersed with snippets of Victor Hudo, meditations on Wittgenstein, and the history of British colonialism in India. A droll and inventive tale for the intellectually omnivorous. Amitava Kumar reads at Oblong Books and Music in Rhinebeck on September 26 at 6pm.

Life Along the Hudson: The Historic Country Estates of the Livingston Family
Pieter Estersohn, foreword by John Winthrop Aldrich
Rizzoli, 2018, $85

Robert Livingston came to the American Colonies in 1673 from Scotland and started amassing land—162,248 acres of it—and wealth. His descendants built some of the most magisterial estates in the region. Architectural Digest photographer Estersohn profiled and photographed 35 historic homes built between 1730 to 1946, including such treasures as Clermont, Montgomery Place, and Wilderstein. Most are so traditionally maintained that it's a shock to turn a page and spot an electric guitar and Fender amp lurking under an ancestral portrait at Teviot.

The 11th installment of Steve Hamilton's bestselling Alex McKnight series finds the private eye on a cross-country chase with a deranged loner who kills young women. Martin Livermore is a killer who draws McKnight into an elaborate plot bent on revenge for a long-ago encounter between the two that binds them together in a terrible secret. Another high-stakes, nail-biting thriller from the two-time Edgar award-winning master of suspense and Rosendale resident. A pitch-perfect late-summer beach read. 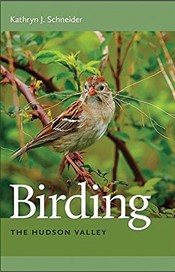 A past president of the New York State Ornithological Association, Schneider has spent decades studying the behavior, ecology, and distribution of birds in the Hudson Valley. Although an estimated 400,000 Hudson Valley residents feed, observe, or photograph birds, the vast majority of New Yorkers enjoy their birdwatching activities mostly around the home. Designed for birders of all levels, this illustrated book contains explicit directions to more than 80 locations, as well as useful species accounts and hints for finding the region's most sought-after birds.

Kathryn J. Schneider reads at Oblong Books and Music in Rhinebeck on September 14 at 6pm.

The author and illustrator of over 20 books for young readers, Talbott looks at Cole's life and art, taking readers from his humble beginnings to catalyzation of the Hudson River school of painting. An English immigrant, everything changed for Cole when he was given a ticket for a boat trip up the Hudson River to see the wilderness of the Catskill Mountains. The haunting beauty of the landscape sparked his imagination, lighting a fire that would inspire him for the rest of his life. A launch party for Picturing America will be held on September 11 at the Thomas Cole Site in Catskill. 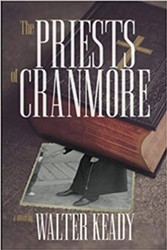 A novel that's sadly relevant to recent revelations of clerical abuse in this country, Keady's latest novel tracks the crimes of abuse in a rural Irish parish. At its center is the tale of a pedophile priest who has been transferred by his bishop when his crimes catch up with him. It is also the story of one of that priest's victims in their quest for justice. The iniquities of the priest reverberate through the parish of Cranmore and his successor, the diocese of Kingsford, and the whole of Ireland.