By Susan Yung and Micaela Warren

The anomalous story “Clementine, Carmelita, Dog” is told from a dachshund’s POV. Means endearingly narrates the thoughts of a dog who—after chasing a rabbit—is separated from her owner. She overnights in the woods amidst smells of bears and finds another family. Renamed Carmelita in homage to a lost daughter, her new life is even more satisfying. But she perpetually dreams of rabbits, and again off-leash, she hunts another down, crosses the scent of her previous human, and follows it to her original home.

Many stories reflect human foibles and outright tragedy. In “Are You Experienced?” the drug-dealing Billy and girlfriend Meg visit his uncle to check on his farm, but also to swindle him. As his uncle prattles on about repairs, they escape with loot. Meg foresees that Billy will be like his uncle when he’s old, telling stories not about the farm, but about drug deals. In “I Am Andrew Wyeth!” a man taking on “a half-baked” version of the artist awaits a Christina not at the foot of a hill, but Grand Central Station. He clutches a contract for her to sign; she is to never divulge his secrets—as if anyone would seek them out.

In “Two Nurses, Smoking,” Gracie and Marlon oversee a machine called the “kidney pounder,” which breaks up kidney stones. They share smoke breaks, affection, and chat about their patients. The story’s form diverges: Subtitles are the first words of each graf’s lede, reading like proclamations, forming a kind of repetition and rhythm. Nurse Marlon, a vet, is revisited by an elderly Afghani woman’s hand wave, which he mistook for a hand holding a gun before shooting her. The recurring gesture takes on haunting resonance.

Marriage and its fragility are ripe topics. In “Vows,” both spouses have strayed, and renew their vows. Omens set flares, or offer tidy assurances. A hill becomes a metaphor for both ardor and a Manhattan banker. The story title “Red Dot” refers to the kayak belonging to a woman whose husband believed she was afraid of water—even though she was, in fact, a great swimmer. The chasm between her secret love of water and its deadly role deepened a growing rift between them, leading to divorce. The husband owned a tavern, and died, ironically, while trying to swim across the Hudson. Means layers narratives so stories are told third hand, in longform paragraphs, adding further opacity.

Car accidents recur. “First Encounter” is a snapshot of a complicated family triangle. A couple in a rocky marriage copes with a druggie teen with seizures who lost a friend to a car wreck. The daughter, hospitalized and recuperating, sees, parked outside, her father in a tryst. She faces the queasy choice of remaining loyal to him, or revealing his betrayal to her mother. We learn that stopping distance is the point when a vehicle must start braking in order to stop before striking a subject. “Stopping Distance” features two members of a group grieving children lost to accidents who reconcile their differing approaches to skiing and to life.

“The Depletion Prompts” reads like a guide to cure writer’s block. A trivial memory snowballs into a recounting of the writer’s sister’s unwanted pregnancy, her flight from home, and institutionalization. Her mother pays a late-night visit to see her daughter and is herself committed. It’s about the ever-present need for writers to innovate, parlaying banal and tragic events into salient stories, as Means does, absorbingly.

Nona Willis Aronowitz, part-time Tannersville resident and sex and love columnist for Teen Vogue, decided to end her eight-year marriage and examine her own and others’ desires and their place within the inequities of contemporary sex. Daughter of journalist and pro-sex feminist Ellen Willis, Aronowitz tells the stories of ambivalent wives, woke misogynists, radical lesbians, unchill sluts, and sensitive men on her journey to find sexual freedom for herself, and, possibly, women everywhere.

They Want to Kill Americans: The Militias, Terrorists, and Deranged Ideology of the Trump Insurgency

In the political chaos of the post-Trump era, many Americans are searching for a return to “normalcy.” In his latest book, Nance, a Columbia County resident and intelligence and foreign policy analyst, argues that this is completely the wrong response: We must instead dive deep into the heart of American democracy to protect it. Nance predicts a stark future if Americans don’t take steps to reverse the damage done by the Trump administration, their allies, and the January 6 insurrection.

Written during the COVID-19 pandemic, the father-daughter duo—both established writers–combined their poetry for the first time to coauthor Fire in Paradise. Bayou-Grace began discussing poetry with her father at a young age and has had his influence in her writing throughout her entire writing development, therefore having his writing printed with hers was a natural fit. Their poetry comes together in Fire in Paradise to survey both the nature around them and personal details of their individual and combined worlds.

Ruin: A Novel of Flyfishing in Bankruptcy

A young hedge fund founder based in New York City, Frank Campbell is faced with losing his wife Yancey’s entire inheritance along with his own money. Seeking a fresh start, the couple escapes to a farm in the Hudson Valley to recalibrate. Overwhelmed by his failures and watching his marriage deteriorate, Frank turns to flyfishing to live the simpler life he aches for. Beginning on a nearby river, he finds success flyfishing and eventually travels the world in search of more elusive fish. Ruin takes readers along Campbell’s distinctive fishing expeditions while taking an existential look into his failures and eventual recovery. 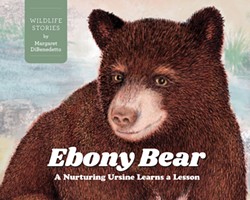 Ebony Bear is a charming children’s book about a mother bear with three young cubs. The book follows the young bears as they are beginning to explore and learn about the world around them, paralleled by their mother’s journey to protect them and herself from humans. It is the first in a wildlife series by DiBenedetto, a native of the Catskill Mountains, aimed to teach children about interacting with animals in their local environment. Each book in the series includes one page on the species featured with relevant facts and conservation challenges. DiBenedetto does extensive research on the species highlighted to give readers an accurate, yet understandable peek into their lives.