In this timely, candid, and mesmerizing reissue (new introduction) of Mark Matousek's 1996 best-selling, breakout memoir, readers are transported back to the mid-`80s in Manhattan, when AIDS cases were rising rapidly and New York City was an exciting and insane place to live. As an editor for Andy Warhol's Interview magazine (he describes Warhol as "the grand vizier of meaninglessness and the most famous artist in the world"), Matousek, was "plugged into the epicenter of that insanity." But after a few years of rubbing elbows with celebrities and witnessing the devastation that AIDS was wreaking on his friends and the gay community, Matousek began to feel the heaviness and emptiness of the glittery and shallow existence he was living. "In the three years since I had started working at Interview, Andy had come to symbolize everything that was wrong with the world: hype and cleverness without soul, a Technicolor surface without depth, a glittering facade fashioned from fame, name, and money."

This was in sharp contrast to how he felt as a young teenager who, at 15, had run away from his tumultuous home in Los Angeles with a friend. In describing how he felt the first time he emerged from the subway in the West Village Matousek writes: "I stood there watching this wonderful circus pass by. New York matched my idea of how huge and outrageous my life could be. Its scale was my scale. I could fit in here and start all over, 3,000 miles away from my mother, those old memories, all that bad blood." In a scary but somewhat funny experience (in retrospect), they only lasted a week and had to call Matousek's mother for money to help them get home.

But Matousek knew he would return, which he did upon graduating from college. Just a few years later, the AIDS epidemic became an intimate part of his reality. Matousek describes being on vacation with his college buddy John (and partner in bitching) in Jamaica and noticing a lesion on John's foot. "In the instant that I saw John's lesion, in the seconds it took me to realize what it was and what it meant for both of us, life as I'd known it cracked down the middle, from chimney to basement. The house I'd lived in—the self I'd believed in, the future I'd thought was waiting for me—was suddenly condemned. Though it was John's foot and not mine, I knew without question that the virus was in me." As the AIDS epidemic came into his own life, grief and fear were added to his expanding sense of dissatisfaction. Upon meeting British writer Alexander Maxwell, he decides to leave the fast-track publishing life and to hit "the dharma trail in search of a meaningful life and spiritual wisdom." Together as lovers, they travel to India and to Germany to meet with Mother Meera, a young woman believed by many to be an embodiment of the Divine Mother. Matousek candidly shares his journey and the often unsettling experiences he has had with trances, visions, and the mystical energy of some of the gurus he encountered on his spiritual journey.

This page-turning account of Matousek's hard and often terrifying childhood (unstable single mother, three sisters each suffering in their own way, sexual abuse, and a stint as a teenage hustler) and the path of his spiritual journey make for an engaging and enlightening reading experience. In the pages of this candid and courageous account of one man's expansive search for spiritual meaning are profound messages of inspiration and hope. Something we could all use today.

Suffrage and Its Limits: The New York Story 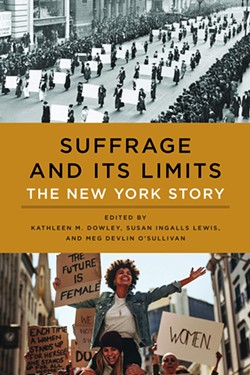 Here is an interdisciplinary overview of the legacy and limits of suffrage for women in New York State on its 100th anniversary. Bringing together scholars with a wide variety of research specialties, Suffrage initiates a timely dialogue that links an appreciation of accomplishments to a clearer understanding of present problems and an agenda for future progress. With a preface by Lieutenant Governor Kathy Hochul and a final chapter by activist Barbara Smith, this collection combines diverse approaches and analyses to make connections between history, political science, public policy, sociology, philosophy, and activism. This study moves beyond merely celebrating the centennial to tackle women's issues of today and tomorrow.

Donnelly, a Hudson Valley resident and the author of the New York Times bestseller Stepsister, offers a dark, feminist retelling of the Snow White fairytale in her latest young adult novel. A kind and foolish princess named Sophie rides off into the forest with the queen's huntsman, who steals her heart (literally, with a knife), seemingly at the command of the jealous queen. After being saved by seven mysterious strangers, Sophie begins to question whether or not the queen is really to blame, and what effect the poisonous words of others have had on her. Sophie must find the strength to overcome the limiting narratives others have written for her, to keep girls like Sophie from becoming too powerful or too strong.

In this haunting thriller, Julie Weathers, a young mother who has lost her daughter to sudden infant death syndrome and her marriage to her husband's alcoholism and abuse, attempts to piece her life back together after answering a job posting: "Opportunity: Teacher needed in one-room schoolhouse on remote island in Maine. Find the freedom in a fresh start." Julie moves to Mercy Island and kicks off a classic tale of isolated-community psychological suspense. She befriends neighbors and slowly gains fascinating insights into the history of the tight-knit community. But soon Julie comes to suspect that she may have traded one troubled place for another, and she begins to wonder if the greatest danger of the island is its remote location or the people who live there.

Sketch & Finish: The Journey From Here To There

The design legend (and part-time Woodstock resident before his death a few months ago) demystifies his creative process in this thoughtful and visually stimulating collection of illustrations showing his journey from sketch to finish. Glaser was a truly multidisciplinary designer working in exhibition, interior, and product designs. Glaser writes, "The tentativeness in the act of sketching is crucial. Doubt is essential. If you already know the answer before you start, why bother? Conviction is the killer of imagination." As he purposefully intends for the reader, it is fascinating to see the paths one's mind takes from the spark of a thought.

Truly a book about nourishing the soul. Thirty-nine Chassidic tales revolving around food and eating are accompanied by spiritual teachings and 63 recipes delving into the mysteries of the Kabbalah exploring Kosher and modern Jewish cuisine. Rabbi Hecht is the spiritual leader of the Rhinebeck Jewish Center; a member of an international family of notable rabbis around the world; and he's known as the Six-Minute Rabbi, innovator of the renowned Six-Minute Torah geared toward business people with busy schedules. Rabbi Hecht has instructed at the Culinary Institute of America and competed on the Food Network's "Chopped," cooking in competition with a priest, a nun, and a pastor. (Hecht finished second behind the pastor.)