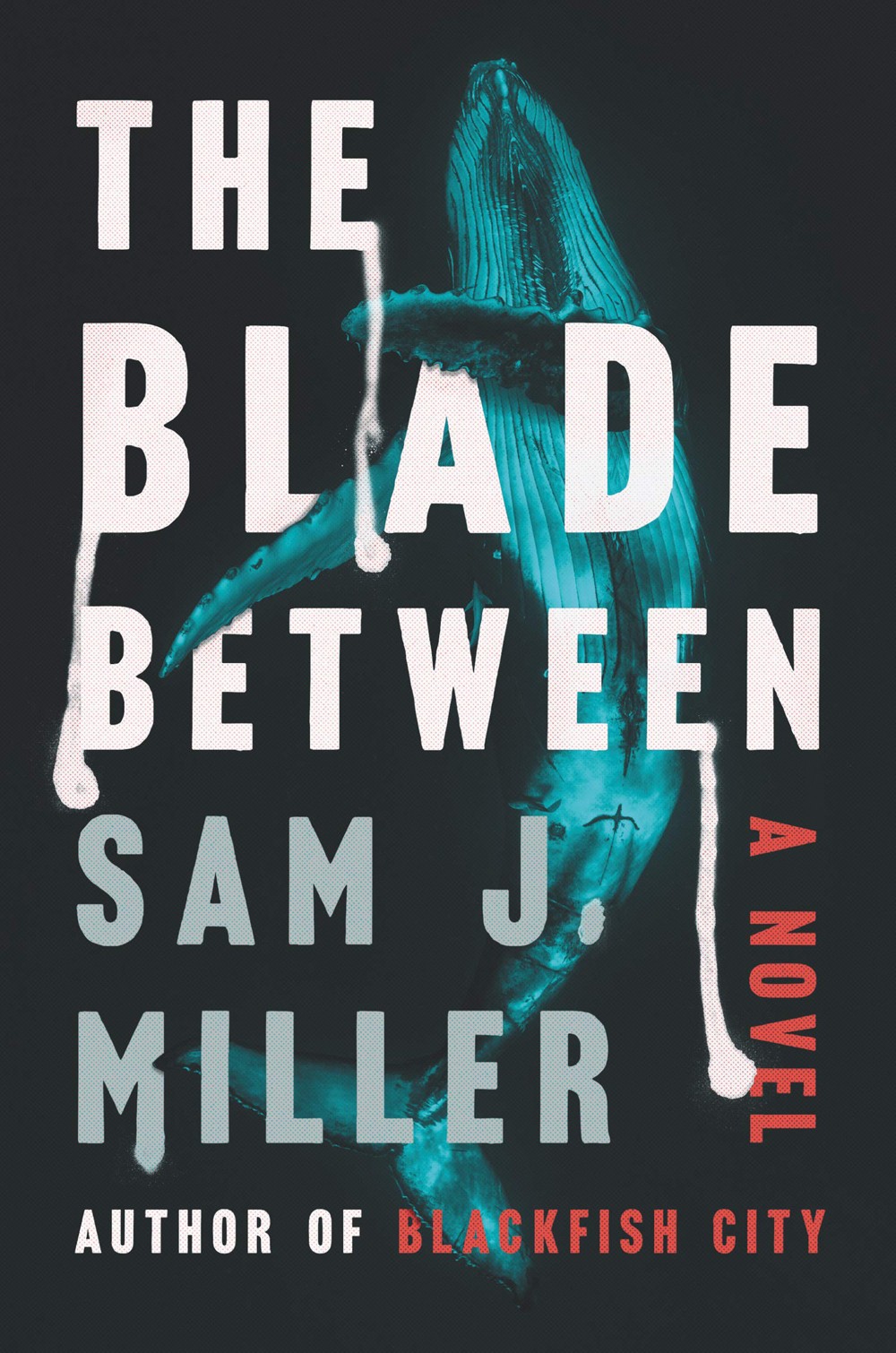 Not much more than a dozen pages into The Blade Between, the protagonist, Ronan Szepessy, thinks to himself, "What the hell happened to Hudson?"

What the hell happened to Hudson, indeed. That could well be an alternative title for Sam J. Miller's terrific new novel. Substitute the name of any large town or small city (or big city?) in America for "Hudson" in that sentence, and much (but certainly not all) in Miller's gripping story will ring true. The question remains, just who is besieging Hudson? Hipster invaders? Greedy developers? Fancy shop owners? Or perhaps the disturbed, tortured souls of the whales that were processed there 250 years ago?

Or is Ronan simply having an off week? He is, after all, experiencing withdrawal symptoms, having sworn off crystal meth. He has, after all, just seen his father for the first time in two decades and found an old man drifting in and out of consciousness and delirium, knockin' on heaven's door. Plus, Ronan is back in Hudson, the town to which he forswore ever returning, having been traumatized as a teenager by his mother's suicide and the relentless homophobic bullying and violence inflicted upon him by his hateful, bigoted peers.

So what the hell did happen to Hudson? Ronan knew all along about the changes that transformed Hudson from a depressed, decaying, post-Rust Belt landscape into a revitalized river town whose art galleries, antiques stores, restaurants, performance venues, and chic boutiques have made it a destination for day-tripping visitors from the Big Apple. But he'd never seen it firsthand. Now, when he looks through the window into his father's former butcher shop (named "Sam's," the same name borne by the real-life shop owned by Hudson native Sam J. Miller's father) and sees the precious, expensive tchotchkes on sale, he literally gets ill. While on the one hand, Ronan had to get out of Hudson because there was no place for him there—not as a gay, creative, stylish, aspiring photographer—still, he is astounded by the displacement and destruction caused by the town's transformation into a culinary, cultural, and commercial playground for the rich.

Then again, Ronan's father has been offered millions for the Warren Street building he's owned for decades. The property is the final link in a proposed mixed-use development that will forever alter the character of Hudson's downtown. Most of that money can and will devolve to Ronan, if he can convince his dead-set-against-it father to sell or come up with some other way to sell it to Jark Trowse—the gay internet billionaire behind the Pequod Arms development, who owns an Etsy-type online marketplace headquartered in Hudson and who is running for mayor.

This leaves Ronan in a tight spot emotionally and spiritually. He very much embodies both the old and the new in Hudson. Now a successful fashion photographer known for his edgy, risqué style, he certainly has more in common with the so-called hipster invaders than he does or ever did with his fellow Hudsonians. Yet his ties to his hometown and a few old friends are deep and abiding, and there is still much love there to explore.

The Blade Between hides a novel about gentrification inside a work of genre fiction. That it works as both is Sam J. Miller's great achievement. He is truly a hometown boy made good.

The Hudson: An Illustrated Guide to the Living River, Updated 3rd Edition

First published in 1996, The Hudson: An Illustrated Guide to the Living River is an essential resource for understanding the full sweep of the great river's natural history and human heritage. The revised volume gives a detailed account of the Hudson River's history, including the geological forces that created it, the species that inhabit it, the various peoples who have lived on its banks, and the great works of art it has inspired. Combining both scientific and historical perspectives, this book demonstrates why the Hudson and its valley have been so central to the environmental movement. Royalties from the sale of the book benefit environmental advocacy group Hudson River Sloop Clearwater.

Part-time Rhinebeck resident Hughes's latest book of stories weaves an exquisite world of complicated family tales on the Jersey Shore. In tender and elegant prose, Hughes explores the saving graces of love and the consequences of loss passed through generations while characters trip connections between stories in unexpected ways, prompting the question: Is the past ever really behind us? Hughes is the author of the bestselling novel Wavemaker II, a New York Times Notable Book, and the acclaimed collection Double Happiness, which earned a Pushcart Prize. Her latest book, The Loved Ones, was a New York Times Editors' Choice.

Based in Ulster County, Atlas is a vegan cooking expert and the author of many bestselling cookbooks, including 5-Ingredient Vegan, Vegan on a Budget, Wild About Greens, and Vegan Holiday Kitchen. Her latest collection of recipes maps out the possibilities of cooking with meat substitutes like Impossible Burger and Beyond Burger. For those with a DIY spirit, Atlas provides from-scratch recipes for plant-powered ground, meatballs, sausage, and bacon-style strips. Recipes include New England Clamless Chowder; Beefy Barley and Bean Stew; Classic Meat Loaf; Italian-Style Sausage & Peppers; Biscuits with Sausage Gravy; Spicy Chorizo Tofu Scramble; Mongolian-ish Beef; and much more.

Under a White Sky

The Pulitzer Prize-winning author of The Sixth Extinction (and Williamstown resident) returns to the topic of humanity's transformative impact on the environment, asking: Can we change nature in order to save it? Kolbert takes a hard look at the new world we are creating. Along the way, she meets biologists who are trying to preserve the world's rarest fish; engineers who are turning carbon emissions to stone in Iceland; Australian researchers who are trying to develop a "super coral" that can survive on a hotter globe; and physicists who are contemplating shooting tiny diamonds into the stratosphere to cool the Earth.

The Trouble with Kim

The subtitle of Branitz's memoir—"On Transcending Despair and Approaching Joy"—gives a sense of the narrative arc of his life, from growing up in and unstable household in various projects in Queens to drug use, bad choices, worse luck, familial tragedy, full-blown addiction, and, eventually, a new start. This is not the redemptive pabulum of a neat and tidy AA recovery story. Branitz, co-owner of vegetarian cafe Karma Road in New Paltz and a musician who records under the name Seth Davis, looks the pain of the world straight in the eye and sees intense suffering. Toward the end of the book he writes: "Addicts are like zombies. Not bad. Just starving."