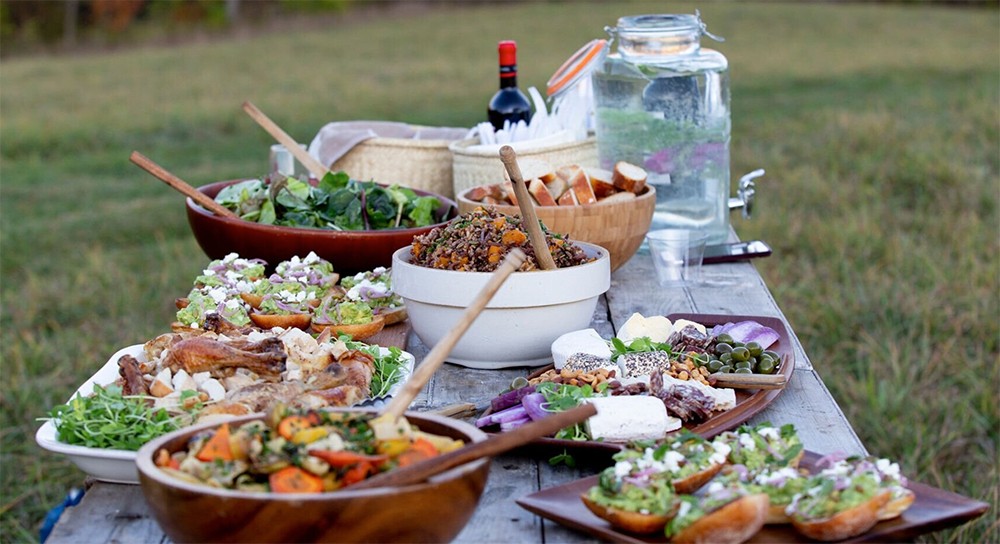 Hoping to break the confines of a traditional restaurant kitchen, Carrie Fogg-Shaw and her wife Rebecca opened Thyme & Co in 2018. Together, with help from their small team of professional chef friends, the Fogg-Shaws have created a positive working environment that allows patrons to dine in an unpretentious and inviting atmosphere. The breakfast and lunch menus are small but the dishes are substantial, centered around comfort food made with locally sourced ingredients. For breakfast, they serve a $5 egg and cheese sandwich, also available with bacon, sausage, or avocado for $8. If you're in the mood for something heartier, the meatball sandwich on the lunch menu, made with Fat Apple Farm pork meatballs, tomato salsa, provolone, and garlic braised greens, is $13. Recent highlights on the specials board include porchetta and short rib sandwiches, a gorgeous charred cauliflower sandwich, and a vegan "cream" of broccoli soup. Sweet treats like cookies, doughnuts, and cakes are usual suspects on the countertop, as well.

Only rest, water, and electrolyte replacement can cure a hangover. In a pinch, however, a Bloody Mary will do just fine, thank you. Now in its seventh year, Golden Tomato Productions has been staging events across the country celebrating everyone's favorite brunch drink (sorry mimosa). On April 4, the Bloody Mary Festival comes to the Hudson Valley for an afternoon of day drinking at the Senate Garage in Kingston. Expect innovative, weird, and wacky concoctions from participating local restaurants like Liberty Street Bistro, Phoenicia Diner, Gracie's Luncheonette, and Oriole 9, among others. Two sessions: 12-2pm and 2:30-4:30pm. Food will also be served, for those who go in for that sort of thing.

Cherry (Tomato) on Top: Bloody Mary Festival Comes to the Hudson Valley
You can try 100 Bloody Marys and they’d all have their own special twist. Though professional bartenders and home mixologists alike have debated the best recipe around, you can taste and vote for the best tomato-and-vodka concoctions in the Hudson Valley at The Bloody Mary Festival at Uptown Kingston's Senate Garage.
By Tiana Headley
Culinary Events

Offerings of drink, cheese, and meat with bread are served up in a low-slung tavern tucked into a historic, burgundy storefront that was built in 1831. Elbowing up to the bar seems to tickle a forgotten antediluvian pleasure receptor in the back of the brain. The level of refinement—both in the quality of the (local) ingredients and the presentation—makes for a standout modern gastropub experience. Opened in 2019 by husband-and-wife duo Kasey and Patrick Kenny, this Kinderhook beer and cheese shop offers 125 beers to drink in or take out, with 10 rotating taps. Among those currently featured: Stands to Reason rauchbier from the Suarez Family Brewery in Hudson and Doodlebug pilsner from West Kill Brewing. If you're looking for some savory bites to accompany your drink, Saisonnier offers cheese boards, like the Columbia County cheese board for $17; sandwiches like the kimchi grilled cheese for $11; or other snacks that pair well with craft beer like house-made hummus plate for $11.

Related 'Tis the Saisonnier: A Bar for All Seasons in Kinderhook: Serving Up Columbia County Terroir in Drink, Fare, and Ambiance

'Tis the Saisonnier: A Bar for All Seasons in Kinderhook
Serving Up Columbia County Terroir in Drink, Fare, and Ambiance
Dreamed up as a cozy tavern showcasing the best craft beers of the Hudson Valley and the world, since opening in summer 2019, Saisonnier in Kinderhook, NY has quickly evolved into a gastropub, beloved for its craft cheese plates, local charcuterie boards, and sandwiches that boast old-world sophistication and simplicity.
By Jamie Larson
Bars

After sitting empty for over a decade, the former Midtown Chophouse space on the corner of Broadway and Downs Street in Midtown is getting new a lease on life as Masa Midtown. ("Masa" is the Turkish word for table.) The new proprietor is Ozlem Oguzcan-Cranston, known as Chef Oz. Oguzcan-Cranston and her husband purchased the building housing Masa at 666 Broadway last April and have spent the last year renovating the 60-seat restaurant space. Masa Midtown, like Turkish-born Chef Oz, is Turkish to the core, and will feature traditional Turkish and Mediterranean fare like zucchini herb fritters with lemon garlic yogurt; raki-steamed mussels with fennel seed, tomato jus, and charred pita; yogurt-marinated chicken thighs on the bone with basmati rice; and filo spring rolls with spinach, kale, shallots, and feta cream. Masa is set to open as a catering and events space on March 1. Oguzcan-Cranston plans to operate in a limited capacity for a few months while the restaurant works out the kinks and Chef Oz can secure a full liquor license. She plans to open Masa as a full-service Turkish restaurant by summer.

We're big fans of Michael Kelly's Liberty Street Bistro in Newburgh. Kelly's meticulous attention to detail at his restaurant continues to set a high standard for food and service in the region. It was with some trepidation that we learned in late February that Kelly had promoted Layla Saif to chef de cuisine, essentially ceding day-to-day oversight of the kitchen to her. Nothing against Saif, we're just sad to see Kelly out of the kitchen. Saif is a Jordanian native who attended the CIA and joined the Liberty Street Bistro team in November 2017. Prior to coming to Newburgh, Saif worked at The Hop in Beacon. We contacted Kelly via email. "My goal here was to allow Chef Saif to shine and express her creativity and talent," Kelly says. "She is a force all her own in the kitchen and it seemed irrational to squander that talent by not giving my her my full authority to put her mark on Liberty Street Bistro." Expect to see a dinner menu relaunch, as well as the addition of lunch service at the restaurant.