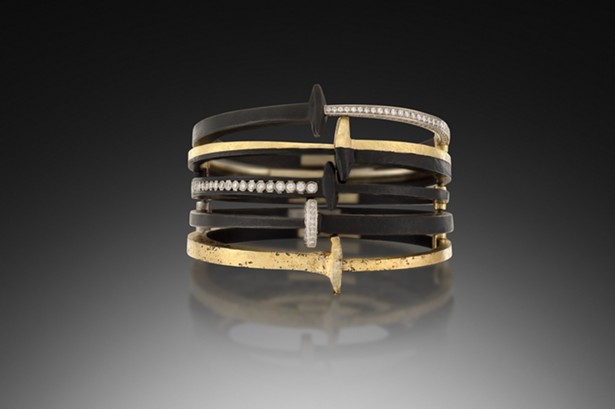 Independent jewelry designers and makers often toil alone over their benches, tables, and forges. Nowadays, things are becoming much less lonely with an abundance of chances to show wares and celebrate community at events such as Phoenicia Flea, Field + Supply, and Basilica Farm & Flea Holiday Market.

These imaginatively curated modern makers’ markets showcase handmade goods—from Amish-y linen smocks to locally distilled spirits to fresh cheeses to pottery—all from craftspeople dotted around the Hudson Valley. But often the most eye-catching displays are jewelry. For lovers of bling great or small, subtle or statement-y, and rough or refined, here are some independent jewelry makers to add sparkle to your life.


Flynn, a Pennsylvania native, studied goldsmithing at SUNY New Paltz in the late 1970s. He had started a family in Maryland when he felt the lure of the Hudson Valley calling him back. “I like the seasons here and the mountains and the old stone walls and the fall,” he says.


Early on, while his jewelry business was fledgeling, he worked as a carpenter renovating the area’s old homes. Regretfully ripping up old worn boards, Flynn ending up with bags of handforged nails. “They eventually ended up on my workbench at home,” he says, where he admired their beautiful patina. Instead of depleting this limited resource, he began to forge his own nails. “That opened up a lot of possibilities.”

Now the bold, textured shapes of his iconic nail bracelets, rings, neckware, earrings, and brooches are a gritty melding of delicate high-karat gold and rough, blackened steel, sometimes with a dusting of glittering gems, an interplay of opposites. “Raw and refined, light and dark, creates an underlying tension in the work,” Flynn says. “I’m not concerned about the edges of things being completely sanded straight. It’s left that way for a particular quality that it gives. Rather than being over-thought or over-considered, you can see the thumbprint of the maker. It’s not completely buttoned-up.”

For a time, Flynn was a bench jeweler at Hummingbird in Rhinebeck, which is among the galleries that now carry his work, See the full list of retailers and galleries.


“I moved from Brooklyn in 2010,” says Lange. “I was looking for a place between the city and upstate, where I’m from, and we landed on Beacon just randomly,” she says. As a Fine Arts major, she had already found her muse—Barbie. “The artists I was really attracted to were using found materials in their work. I was looking for something that had more relevance to me,” she says. 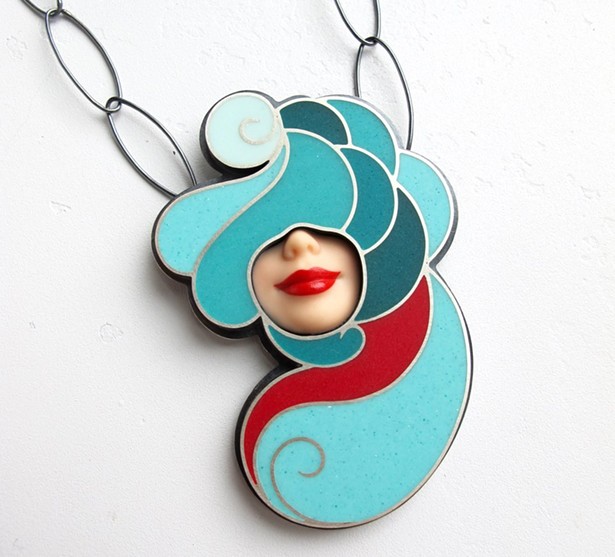 Lange’s unusual art jewelry, called the Plastic Body Series, is made from Barbie doll elements (think eyes, feet, hands) along with swirling and somewhat psychedelic shapes in sterling silver and resin. “It’s an examination and celebration of our culture and my own obsession with Barbie,” she says.


In fact, she credits her years playing with the buxom, iconic doll for the attention to detail and dexterity required by her work. Now she combs through the yard sales of the Hudson Valley for more material. Her young daughter helps find gems (and doesn’t mind if they end up missing a piece or two). 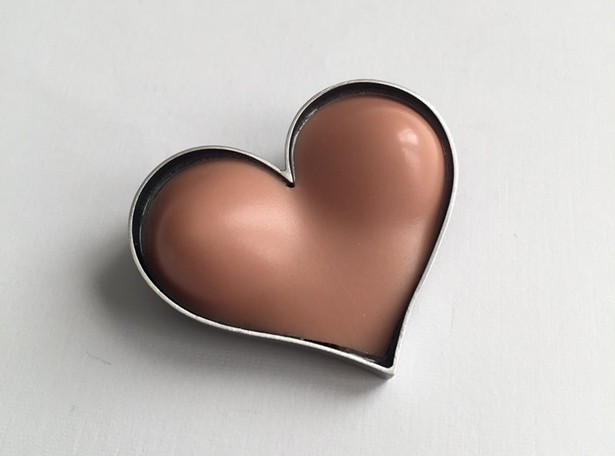 “The appeal of the Hudson Valley is the lifestyle here,” she says. “I’m an avid hiker and runner and I’m able to get my self-care here a lot easier than in the city. Also, I can maintain a studio practice that’s affordable because it’s in my home.” She sells in galleries, boutiques and (primarily) on her own web shop.


Golden, who grew up in sleepy Central Connecticut, was living in NYC when frequent visits to a cousin’s weekend house in the Catskills charmed her into considering a full time move. With a background in studio art, she apprenticed with a centuries-old jewelry-making studio in Florence, Italy. Next she went to work designing jewelry for trendy brands such as J. Crew, Kate Spade, and Club Monaco.

That combination of training—the close-up bench work as well as the bigger-picture design work—combined to inspire her to start her own line of handmade, one-of-a-kind pieces. “I really do feel so much more connected to the pieces knowing I was there from the start,” she says. “All the pieces are hand carved, and I love that you can see file marks. It makes it a lot more meaningful when it’s a person spending time making it, rather than being just punched out of metal.”

Golden’s Starscape collection features biomorphic shapes mimicking meteors and galaxies. Crystal Lace pairs unusual stones in patterns inspired by English lace. “I’m a total magpie,” she says. “I love precious and semi-precious stones and sparkly things. I will always gravitate toward things that have a bit of sparkle to them.” 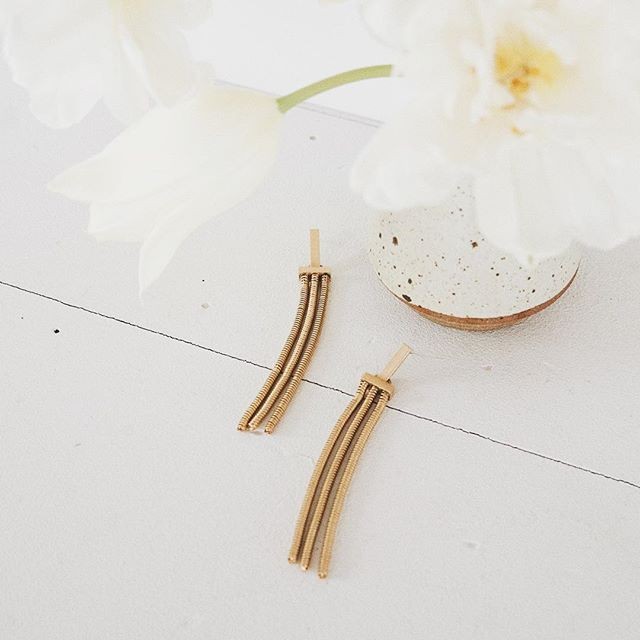 She feels that living in the Catskills/Hudson Valley has “literally brought me so much closer to nature,” she says. “We’re surrounded by so many beautiful things every day.” Her next collection is inspired by wildflowers in a nearby meadow. “What I’m especially intrigued by is how irregular and asymmetrical they can be, but they are still beautiful. Something can be a little off and a little irregular but still wonderful to look at.” She sells on her website and is in the Kingston shop Clove & Creek.


MacGill grew up in and around New York City, where her father’s art gallery represented luminaries in the photography world such as Robert Frank, Richard Avedon, and Irving Penn. When young Mary decided she was interested in making jewelry, her well-connected parents sent her to Robert Frank’s muse Kazuko Oshima, a ground-breaking jeweler who sold her crystal, stone, and wire wares exclusively at Barneys. 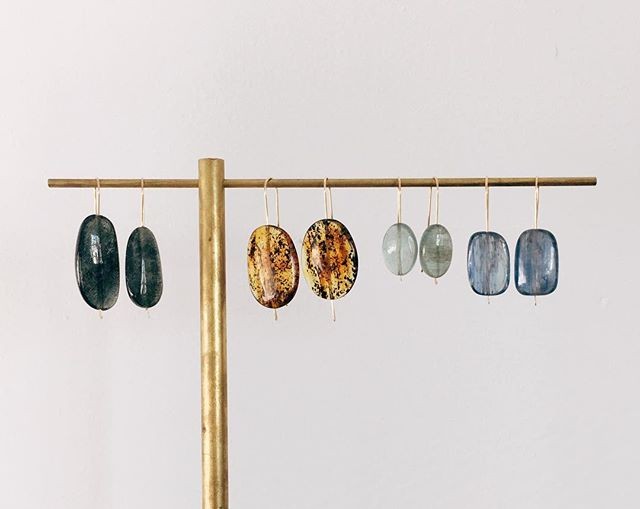 Like her mentor, MacGill favors smooth-cut or cabochon stones or all kinds of pearls (example: a Tahitian black pearl wrapped in gold wire). MacGill was also inspired by the work of Alexander Calder. “The concept behind my jewelry has always been how to figure out how to suspend pearls and stones with wire to give the viewer the impression of floating in space, that lightness and simplicity,” MacGill says.


She showed at the original Field + Supply and met local artists. Convinced to move to Tivoli, she discovered Germantown, where her studio sits on Main Street (half of an old dry goods store she shares with furniture maker Michael Robbins). Her pieces are sold there (along with the work of other artists and artisans—jewelry, home goods, and clothing), online, and in a long list of shops around the world. 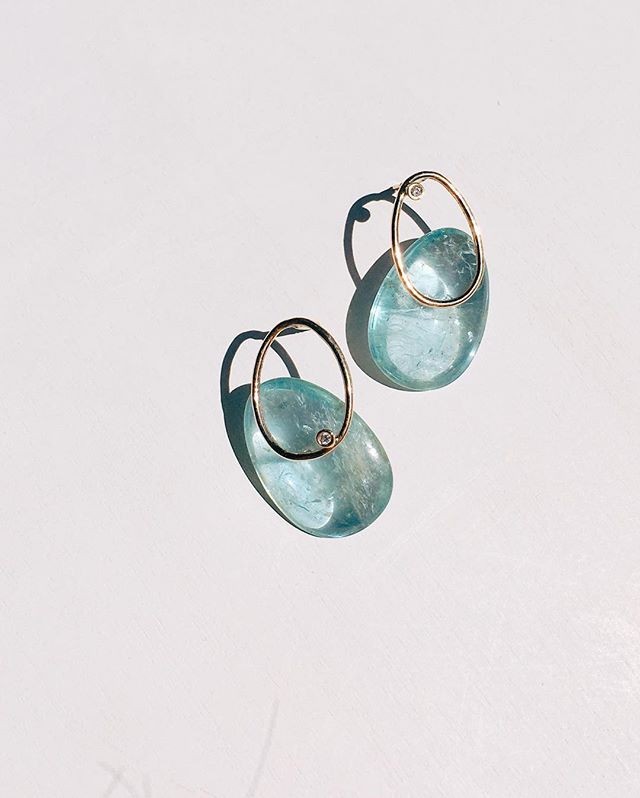 In a best-of-both-worlds outcome, she also has a pop-up shop on Block Island, where she has spent summers since she was a girl. “I am very much inspired by the ocean,” she says. “I grew up going there and that’s where I started the business.”