Are your autumnal playlists in need of a little refresh? Looking for new sounds to sooth you through seasonal affective disorder lows and harvest highs?

With decades of outstanding work alongside some of the greatest figures in music—most notably as a part of pianist Brad Mehldau's trio—Larry Grenadier represents the gold standard of modern jazz bass, his ample discography showcasing his exemplary finesse, indefatigable swing, and purposeful support with every project. For all that, his first date as a leader is an utter revelation, a dramatic artistic statement for solo bass that rewards repeated listenings.

Grenadier notes, "The process for making this record began with a look inward, an excavation into the core elements of who I am as a bass player." With pieces broken out into roughly half pizzicato and arco, Grenadier's compositions offer a wealth of textures that fascinate with their simultaneous breadth and simplicity. His bowing ranges from the gorgeous swells of the appropriately titled opener, "Oceanic," to precise, haunting expressions in the altissimo register on the title track and on John Coltrane's "Compassion," contrasting smartly with his superlative walkabout on "Pettiford" and legato arpeggios on "Woebegone." There's also an admirable spurning of purism, allowing the briefest of occasional overdubs to augment certain tracks, nowhere more affectingly than in the 48 seconds that comprise "A Novel in a Sigh." Much like the juxtaposition of a tree bursting with life amid a cityscape on the album's cover, The Gleaners is a robustly organic model of sophistication and the majestic summation of a remarkable career to date, one that heralds outstanding possibilities for this now all-the-more accomplished musician.

DAVID_GREENBERGER_Brenda_s_Dream.mp3
Update Required To play the media you will need to either update your browser to a recent version or update your Flash plugin.

David Greenberger and Prime Lens
It Happened to Me

Ed Ruscha's influential word paintings are droll and forthright: aphorisms caught within shimmering sunsets, maxims capping mountain ranges. They reveal new meanings with each new visit but through no specific strategy of their own. The viewer provides the perspective. Ruscha painted the cover of David Greenberger's latest set of spoken-word "audio paintings," It Happened to Me, which, if nothing else, proves the latter's own status in the art world. For 40 years now, Greenberger has been making art out of conversations with the aging. This latest batch, gathered near Ruscha's LA expanse, and accompanied by the musical ensemble Prime Lens, is perhaps his most humanistic yet, peppered with immigrant tales and sweet recollections of hard lives. Like Ruscha, Greenberger doesn't provide the emotions, only the words—you can do the rest on your own.

LARRY_GRENADIER_Pettiford.mp3
Update Required To play the media you will need to either update your browser to a recent version or update your Flash plugin.

Frenchy and the Punk
Hooray Beret

The Hudson Valley's steampunk soul twins, Frenchy and the Punk (formerly the Gypsy Nomads), wear weird like a badge, continually defying categorization on every recording with their passionate sound play. Gypsy? Punk? Rock? Cabaret? Tossing them into the generic indie box would be laughable. Having heard and seen them live through several shapeshiftings, I'll say their boisterous vibe has not faltered one bit. Their sixth album is spirited, fearless, even lawless. It's no wonder they have been embraced by imaginative, creative steampunks. Samantha Stephenson's cavorting vocals are reminiscent of Kate Pierson these days—pure merriment. Scott Helland bangs acoustic strings as he did electric strings in his hardcore punk days, still rowdy and precise as hell. This album doesn't waste time from note one, an energetic urgency catapulting listeners into a 10-song traverse that never soft-pedals. These magnetic mavericks tour like fiends, so catch them as they hurtle from gig to gig. 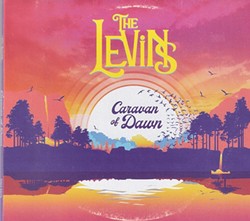 The Levins
Caravan of Dawn

Husband-and-wife folk-pop duo Ira Levin and Julia Bordenaro, who perform as the Levins, are a gentle throwback to a more harmonious time, musically and otherwise. Their close harmony and unison vocals and eclectic musical stylings—blending folk, pop, jazz, soft-rock, and Eastern music—combined with their inspirational and spiritual-minded lyrics recall such beloved '70s artists as Seals & Crofts, England Dan & John Ford Coley, Cat Stevens, and America. Julia, who plays piano, and Ira, who handles acoustic guitar duty, are augmented by a talented, sensitive group of musicians, the standout unsurprisingly being the world-renowned Steve Gorn on evocative Indian flute. Their sophisticated melodicism and soulful, vocal acrobatics are a winning combination, as are their impassioned, timely lyrics: "Let's go out to meet the modern, willing to embrace / See the gold inside the dust, be the change that's taking place."