Poughkeepsie's own Charles R. Smith honors Black History Month with a rollicking, informative book profiling 28 major American figures of color, from the well-documented—MLK, Rosa Parks, Obama, et al.—to the less renowned but no less fascinating, like Roy Henson, who conquered Everest but was denied recognition, or Crispus Attucks, a slave whose defiance of the Redcoats instigated the Revolutionary War. Shane W. Evans' illustrations are bold and lively, edgy yet bursting with heart. —RBW

Hudson Valley native Gary Golio is fast becoming the go-to guy for musician-oriented books for children, previously introducing youngsters to Jimi Hendrix, Bob Marley, Bob Dylan, and Woody Guthrie. With Bird and Diz, he and Caldecott Award-winning artist Ed Young create a vibrant tribute to one of the most influential friendships in all of music: the spark-inducing, dynamic interplay–both personal and musical–of legendary trumpeter Dizzy Gillespie and illustrious saxophonist Charlie "Bird" Parker. —RBW 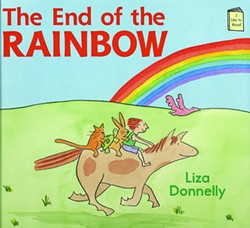 THE END OF THE RAINBOW

Celebrated New Yorker cartoonist Liza Donnelly keeps it simple with effortless-looking watercolors and a tot-friendly story. Her intrepid heroine sets off to find the end of the rainbow, gathering fellow dreamers of various species en route. Tiny listeners will enjoy the soothing rhythms, and though local parents may gasp at bare feet on grass (tick check!), they'll appreciate the resilient conclusion. "You Can't Always Get What You Want, But..." for the younger set. —NS

In the Ransomes' searing Light in the Darkness, slaves gathered to learn in secret. Freedom's School is a worthy successor, and Lesa Cline-Ransome's moving narrative lays out stark truths: post-Abolition, education still means family sacrifice, and racist threats still hover. But the community's fierce determination to rise delivers a potent, affirmative ending. Timely and wise, with stunning illustrations, this new offering from this prolific Rhinebeck husband-wife duo is a rich gift indeed. —NS

JUST LIKE ME, CLIMBING A TREE: EXPLORING TREES AROUND THE WORLD

The illustrations and verse in this celebration of all things arboreal are sweet without being cloying, simple without being monotonous. The recommendation is for ages five and up, but it's easy to imagine a toddler being captivated by the music of the words while an older sibling delves deeper into the geography and science artfully woven in by Catskills author/illustrator Durga Yael Bernhard, two-time winner of the Sydney Taylor Honor Book Award. —APC

TELL ME WHAT TO DREAM ABOUT

WHALE TRAILS, BEFORE AND NOW

WHILE YOU WERE NAPPING

Despite its title, While You Were Napping actually taps into the joy of leaving the nap behind, and the mischievous urge to make a younger, still-napping sibling jealous of that freedom. Award-winning Dutchess County author Jenny Offill (Dept. of Speculation) and renowned New Yorker cartoonist Barry Blitt concoct a narrative of pirates, astronauts, fire trucks, and robots, all of whom the narrator—an older sister—claims to have seen during her younger sibling's nap. Deliciously wicked. —RBW

EXTRAORDINARY PEOPLE: A SEMI-COMPREHENSIVE GUIDE TO SOME OF THE WORLD'S MOST FASCINATING INDIVIDUALS

"Individual" is the key word in the subtitle of this irreverent, addictively readable geek-out from writer/musician Hearst of One Ring Zero. Scamihorn's comic book-inflected artwork and lively layouts keep pages turning, and a diverse cast of 50—including Otzi the Iceman, Evel Knievel, Helen Keller, Bruce Lee, Leon Theremin, and Malala Yousafzai—bring the goods. Every tween will have favorites, but it's hard to beat "Stagecoach Mary" Fields, the rifle-toting, cigar-smoking African American who was America's first female mail carrier. Appearing 8/8 at 2pm, Time & Space Limited, Hudson. —NS

Three's not a magic number for friendships, especially when two besties vacation without the third. But suddenly, in lonely Sadie's yard, smoke puffs from her playhouse's chimney; inside, a black-gowned woman is stirring a cauldron. The witch teaches Sadie about spells and birds, and helps her appreciate what's in front of her instead of longing for what's not. Co-written by Highland resident Christine Heppermann, this whimsical chapter book will enchant early readers. —SK

MY LIFE IN DIORAMAS

There's no place like home, especially when it's a sprawling Hudson Valley farmhouse nicknamed Big Red. When middle schooler Kate's parents put her beloved home on the market, she pulls out all the stops to stave off moving. When a realtor pops cookies in the oven for a "homey" smell, Kate hides cowflops for stink. Tara Altebrando captures the urgency of tween emotions and friendship dynamics, and nails the local details. And when one home's door closes, another opens. —NS