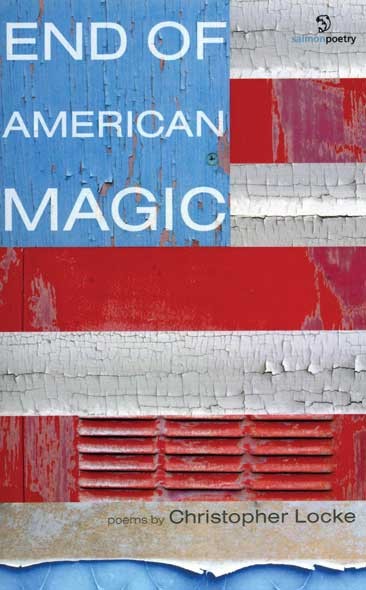 End of American Magic
Christopher Locke
Dufour Editions, 2011, $21.95
In these austere lyrical poems the ordinary and the familiar, so dear to William Carlos Williams, rise on thermals of intellect: “…the sun / glimmering like the face of a bride / before the veil is lifted.” Locke, who lives in New Lebanon, is a poet of startling delicacy and epiphanies that ambush us. In “The Bomb” he writes, “I could smell flesh, / and then the flames grew, / because as we all know, / anything alive has to eat.” Few contemporary poets are as alive to the world. The genius of his title is how subtly each poem builds to its truth. —DM 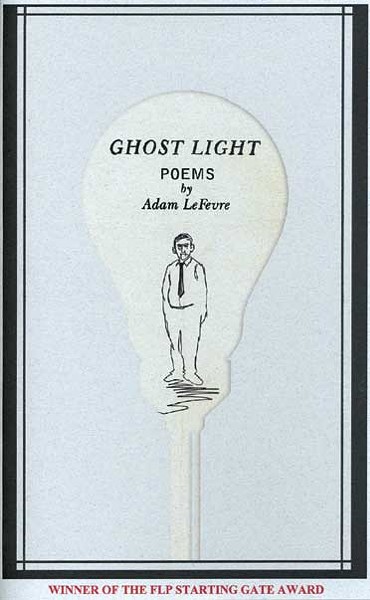 Ghost Light
Adam LeFevre
Finishing Line Press, 2012, $12
New Paltz actor/playwright/poet LeFevre presents bold, physical poems that tear away or “flense” pretense, while exploring pretense as an art form. “Who am I tonight?” an aging actor asks his reflection, “voice / whisky and rosewater wafting / from the gathering house.” The responding soliloquy attempts to reconcile pursuit of meaning with mature awareness: “…text is stone / But you must make it rise and walk.” As in stagecraft, contradiction rules; “right is left...left is right.” Yet “if you make music of the word,” there’s recompense: that worn harridan, the muse, slides onto the next barstool and “without a smile / caresses my face with a broken nail.” Ghost Light won the Starting Gate Chapbook Award. —LG

I-Formation, Book 2
Anne Gorrick
Shearsman Books, 2012, $17
Gorrick’s title, a tennis term, suggests the formation of a self, an “I” depicted in poems that riff musically on anagrams of people’s names. These poems’ seductive beauty, both visually and aurally, derives from play and interplay of language. Ample white space, suggesting a canvas, provides stillness in which lines resound: “Noun mimics matter / marrow.” The denser Hudson Valley Poems seem to radiate through landscape accumulating possibilities: The lines “We nurse frozen stars / The river returns to me an iodine sky…” spiral into “The river cannot contain the iodine skies…the end will remember itself as a constellation of words.” Uniquely vibrant poems. —LG 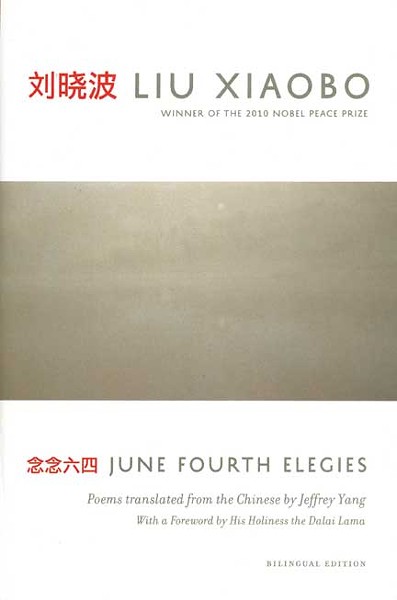 June Fourth Elegies
Liu Xiabo, translated by Jeffrey Yang
Graywolf, 2012, $26
Blanched bones here are summoned to testify by this Nobel laureate and imprisoned activist. These 25 elegies to the fallen of the Tiananmen Square protests of June 4, 1989, resurrect the dead with a despair so pitilessly honest as to be a sort of alchemical elixir. Beacon poet-editor Jeffrey Yang brings us Liu Xiabo’s unflinching cri de coeur as a kind of preternatural stare: “Young soldiers / recently clothed in uniform / still haven’t felt / the drunkenness of a girl’s kiss / but now in an instant / experience the bloodthirsty pleasure / of murder, their youth’s beginnings.” Or, still more uncompromising, “Life is but continuous indifference.” —DM

Logician of the Wind
Lee Slonimsky
Orchises Press, 2012, $14.95
Both love of form and unpredictability are guiding principles in Slonimsky’s philosophical nature writing. In well-crafted poems, primarily sonnets, he celebrates the remnants of our evolutionary history embedded in natural forms: The shape of a horse head etched in a tree knot suggests prehistory before plants and animals differentiated. The poems delight in natural geometry: “Triangulate these platinum hot rays… / hypotenuse of breeze / to calculate gray hawk’s square root of glide.” Yet the chaos after a storm, the “tangle, bramble, wind-demented sprawl” also amazes. These poem-meditations, in their easy conversational style based in science and logic, arrive at wonder and transformation. —LG 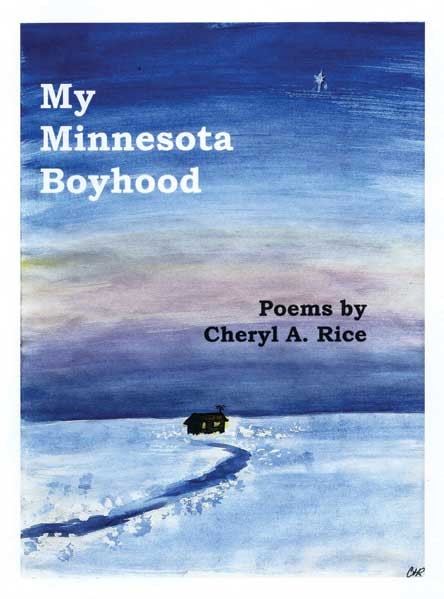 My Minnesota Boyhood
Cheryl A. Rice
Post Traumatic Press, 2012, $8
Unfazed by “having had neither / a boyhood nor a Minnesota,” Kingston spoken-word diva Rice baits her ice-fishing hook and hauls an imaginary childhood from the murky depths where shards of her Long Island youth commingle with a friend’s “Midwestern fields in plaids of green and brown” and a dash of Frostbite Falls. Ice persists in Manhattan (“Rockefeller Center”) and upstate, yielding to warmer seasons (“The World Stood Still For Easter,” “Spring Thaw,” “Abundance”) and the drowning of inconstant love, “...his hollow bones / bear me up over these Catskill cliffs, watery moods. / How deeply can I hold my breath?” Rice’s plainspoken eloquence gives this chapbook a liquid grace. —NS

Perpetual Motion
Marilyn McCabe
The Word Works, 2012, $15
“How we parse this profane world” is the subject of this astonishing collection by Saratoga poet McCabe, whose free-range intellect channels Blake and Magritte, backhanding French puns and mathematical proofs without a shred of pretension. When cosmic thoughts induce ontological dizziness, her cure is an ice cream cone, “a great tongue moon / lapping the ice cream planet.” In “I’ll Take the #8: An Ars Poetica,” the poet orders up a blue-plate special of idiosyncratic imagery; “At Freeman’s Farm” conjures a vision of meadow as battlefield: “Men rise from the ranks of Joe Pye weed and loosestrife / ghostly as cow parsnip.” Leveling a wise, bemused gaze at the world, McCabe observes, “It’s not easy / / here. We’re ourselves in sheep’s / clothing.” —NS 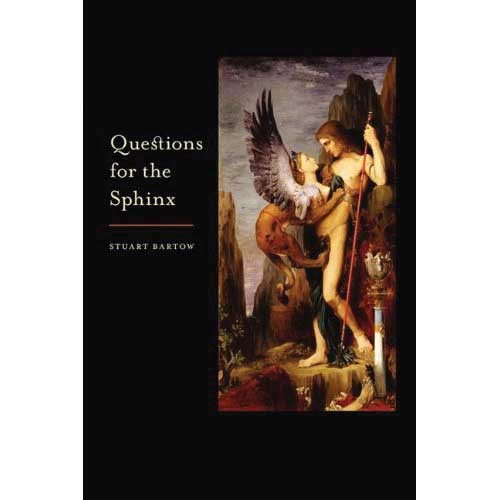 Questions for the Sphinx
Stuart Bartow
WordTech Editions, 2011, $18
Stuart Bartow’s third collection, Questions for the Sphinx, pursues ancient myth, the stars, the enigmas of the cosmos in widely ranging poems of wonder and mystery. The song of the Syrens, “the greatest girl group ever,” propels him toward poetry’s “mist-shrouded coast,” where, as Glaucus, fisherman turned sea-god, he “consorts with beings merely inconceivable.” A woodsman, Bartow finds the cosmos reflected in his Adirondack landscape: in the trout’s “streaks, hidden meteors,” upon moth wings, “a calculus / for counting nebulae.” These elegant poems tend toward tempered joy, “the substance of song throned in tissue and illusion.” —LG

Straight’s Suite for Craig Cotter & Frank O’Hara
William Heyen
Mayapple Press, 2012, $14.95
Sexuality is the energy for this most public poet’s intellectual beam as he probes the darkest crannies of the American psyche in this new release for Woodstock’s Mayapple Press. Addressing the late poet and art critic Frank O’Hara, he explores the quintessential question about art. What is it? “If a poem is not about thought but is thought, / then I won’t think to say how reading you, Frank, / sometimes feel as though your thought reads me.” Few poets today are capable of Heyen’s sustained and restless prosody, his well-humored timbre and meter. The alchemy of observation and inquiry in him is breathtaking. —DM

Traction
Mary Makofske
The Ashland Poetry Press, 2011, $15.95
The first poem here invokes Mary Makofske’s elegiac spell. It ends: “It still breathes / as in a meadow, waiting for the bees.” We’re the bees come to pollinate these meadows of splendid inquiries and contemplations. Each line-break of this Warwick poet falls like warm rain, each image summons an impossible olfactory familiarity. Whether it’s about prehistoric man’s wounds or the minds of dolphins, a profound contemplative sings to us. In “The Wound-Dresser,” an ode to Walt Whitman, we get not only his long sculling strokes but also the rapture that foreshadowed Hart Crane. A triumph of compass and skill. —DM