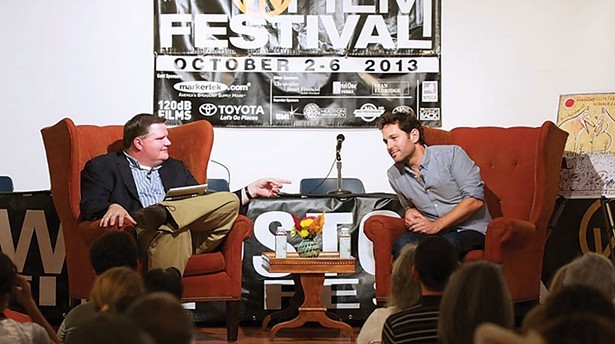 "I remember the first year almost as if it was yesterday," says Woodstock Film Festival Executive Director and co-founder Meira Blaustein. "I've been watching the evolution of the festival very closely. Every year had its own distinction. And I feel like this year, parts of the programs are juxtaposed in such a way that creates an interesting tapestry of not only today's filmmaking, but also today's society."

One element of that tapestry is youth. Some of the films that will be screened emerged from a festival-run summer workshop for young filmmakers in the area.


"We have really wonderful works by teenage filmmakers. They are coming in from all over the country," Blaustein says. "We also have a couple of films about young people taking charge of their lives and empowering themselves as well as others."

Somaliland and Personal Statement are documentaries about kids trying to improve their lives against socioeconomic odds and attend college in the United States. The latter takes place in New York City, the former in Somalia. The makers of both films and their subjects are expected to attend the festival. A panel called The Power of Youth, scheduled for Sunday, October 14, at the Kleinert/James Center for the Arts, will include people involved with both films.

"It's all going to be about the young generation and how they're taking their lives in their own hands and changing the trajectory of their lives and those around them," said Blaustein. "These people are our hope."

Issues in the News is another event centered around youth. Following a screening of Lessons from a School Shooting: Notes from Dunblane at the Woodstock Playhouse on Saturday, October 13, the panel will feature filmmakers, dignitaries, and activists from Newtown, Connecticut, the site of the deadliest school shooting in US history. Clips from director Kim Snyder's forthcoming documentary about the school shooting last year in Parkland, Florida, will also be shown for the first time.

"I think that's going to be quite special. Not easy to watch, but very important and moving," Blaustein says. "If you take all of that together, you can see that there is a real power of youth presence in the film festival. I'm proud of that."

The festival will also include a three-film series called Filmmakers of Color, programmed by Roger Ross Williams, the first African-American director to win an Academy Award, for his 2010 documentary Music By Prudence. The documentaries Williams selected are Hale County This Morning, This Evening; Mr. SOUL!; and Shakedown.


"I'm really happy that this year we have more diversity than ever before," Blaustein says. The festival will feature its highest number of films by filmmakers of color to date, all of whom will be in attendance. The festival will also screen 21 films directed by women, most of whom will be present. "I'm proud that we can play a substantive role in bridging the gender gap in film and entertainment," Blaustein says. "Every day it seems more important. The more you bridge the gap, the more you see how large the gap still is. We're committed to doing our part."

There will also be live musical performances accompanying a handful of documentaries, including the festival's kickoff event, which will see the Karl Berger Band perform at the Woodstock Playhouse on Wednesday, October 10, following a screening of the biopic Karl Berger—Music Mind. Also at the Woodstock Playhouse, musician and activist Michael Franti will play an acoustic set on Friday, October 12, after a screening of Stay Human, a documentary he both directed and starred in.

When asked what has kept the Woodstock Film Festival vibrant and independent over nearly two decades, Blaustein responds, "Part of it has a lot to do with the locale—small towns, small venues that lend themselves to this down-home kind of environment." She adds, "Part of it is just who we are. We are friendly, casual people who really love film and have a very deep understanding and knowledge of it. And we work very hard to make it happen."