19 Hudson Valley Events to Light Up Your November Calendar 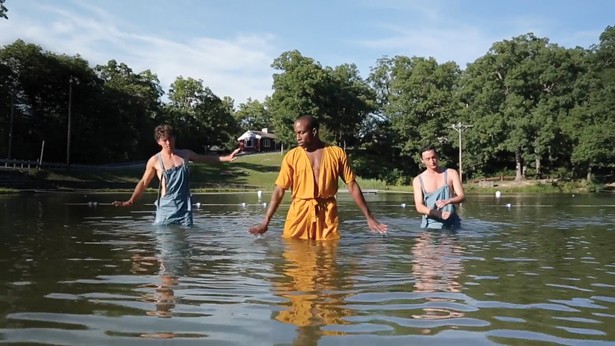 Hudson-based choreographer and dancer Adam Weinert is premiering his newly commissioned dance performance “Anthem” at the EMPAC Concert Hall in Troy this month. The performance, which rewrites the American anthem from a dance perspective, considers the failed narratives and failed hopes of our country. The movement in “Anthem” draws from a fake news article describing imagined original choreography from 1916 meant to accompany the national anthem. The performers, wearing Bluetooth in-ear monitors, will move in unison to a different soundtrack than what the audience is hearing—a sad, yet cogent commentary on our times.

November 4-5 at various locations in Beacon

The idea for this immersive festival of art and music emerged from a series of gatherings around a bonfire a group of artists produced during the COVID-19 pandemic as a way to bring residents of Beacon together. Two years later, festival organizers are shining a light on the city’s diverse cultural offerings with a town-wide festival called the Beacon Bonfire. Over 100 artists will be performing or exhibiting their work across Beacon across two days of programming and activations, from concerts in venues like Towne Crier Cafe and Quinn’s to bonfires all over town and performances in nontraditional spaces.

November 6 at the Egremont Barn

The Southern California-based Little Days began in 1998 as the studio project of Gov’t Mule bassist Jorgen Carlsson and his wife, singer-songwriter Mini Diaz, but have since become a performing quartet. “They don’t rely on Auto-Tuning, drum machines, or sequencing, but instead they have live studio musicians playing their real instruments,” asserts their bio. “The aim is to have their recordings sound like a missing tape reel found in a vault circa 1978, inspired by the pop rock music of that time.” The band eases into the Egremont Barn on its East Coast tour. (The Mammals make music November 12; the Mallet Brothers hit November 18.) 7pm. $15. Egremont, Massachusetts.

Take a Look at This Heart

Beacon-based filmmaker Ben Duffy screens his 2019 documentary about love, sexuality, and the human bond in the disabled community at Story Screen this month. Take a Look at This Heart is an empathic journey into the lives of 17 people; some with disabilities and the partners who love them, others struggling to get by in a world that often seems to overlook them. The film will be followed by a Q&A with the filmmaker.

Over 90 small-scale natural wine producers will be pouring at this annual gathering. Attendees at the 2022 Peripheral Wine Festival can enjoy natural wines from France, Italy, Germany, Austria, Spain, and the US (California, New York), while hearing local live music and tasting fare provided by regional restaurants. The region’s only natty wine fest, it offers unlimited tastings of naturally fermented beverages produced with a dedication to organic practices, native yeast fermentation, and minimal intervention.

November 12 at the Orpheum Theater

Part of Upstate Films’s “Close-Up” series, the centerpiece of this evening of film and music is a screening of Jodi Wille and Maria Demopoulous’s The Source Family. It tells the story of a charismatic former Marine, Jim Baker, who began a commune in Los Angeles in the ‘70s that attracted beautiful young followers. In a sprawling mansion, flower children meditated, made psychedelic music and tantric love, and ate bean sprouts. There’ll also be music from Ben Jones and a screening of footage from a work-in-progress about the Unarius Academy of Science, a folk-healing public access TV collective.

Singer-songwriter Martha Wainwright has been overdue for a visit to these parts for quite some time—and, lo, here she is, joined by her sister Sloan Wainwright, for a rare and intimate performance at Radio Woodstock Studios. The two siblings are part of the musical family dynasty that includes their father, Loudon Wainwright III; late mother, Kate McGarrigle; and brother, Rufus Wainwright. All of the proceeds generated by the limited-attendance (80 seats only) show will go toward supporting area venue Unison Arts' programming for the remainder of the year and into 2023. 5pm. $150-$200.

This is National Wake

Chatham-based filmmaker Mirissa Neff screens This is National Wake (2018), her documentary tracing the rise and fall of the multiracial South African punk group, “the band that defied apartheid,” whose members risked everything to taste freedom and documented their courageous performances in Super 8. The band’s “brilliant archival footage” forms the basis of Neff’s revelatory film. The PS21 screening will be followed by a Q&A with director Mirissa Neff.

November 12 at the Old Dutch Church

The Percussion Orchestra of Kingston (known colloquially as POOK) is a young people’s multicultural, world rhythm, drum, and percussion performance ensemble founded by Evry Mann in 1997. POOK plays and traditional, folkloric, and original rhythms for community events, schools, and festivals. As part of the Peaceful Guardians Project, the group works to improve community/police relations. To celebrate its 25th anniversary, POOK is hosting a fundraising concert at the Old Dutch Church in Kingston that will feature performances by the ensemble as well as guest drummers. Proceeds will help buy new drums and percussion instruments.

Improv takes a detour into the psychologically focused lane of hypnosis in “Hyprov,” starring “Whose Line Is It Anyway?” comedian Colin Mochrie and hypnotist Asad Mecci. A mind-blowing, jaw-dropping, side-splitting show that combines hypnosis and improv—two art forms that have entertained and mystified for decades. A couple dozen volunteers from the audience will be put under hypnosis by Mecci and perform improv with Mochrie at the Paramount Hudson Valley Theater.

“The Rise and Fall of Jean Claude Van Damme”

The full title of this “gleefully juvenile show” (New York Times) says a lot: “The Rise and Fall, Then Brief Modest Rise Followed by a Relative Fall Of…Jean Claude Van Damme As Gleaned by a Single Reading of His Wikipedia Page Earlier This Month.” This Off-Off-Broadway show at Philipstown Depot Theater is a minimalist affair—two actors reenacting an approximate biography of the Belgian action hero with action figures jury-rigged into puppets—and delightfully zany.

November 17 at the Falcon

Jazz percussionist, occasional bassist, and local legend Juma Sultan is known best for his performance with Jimi Hendrix at the Woodstock Festival in 1969. But Sultan was a key musical figure well before that landmark event, playing a crucial role in the New York free jazz loft scene earlier in the decade and founding his ever-changing Aboriginal Music Society collective in 1968. He recently resurrected the ABS project as a nine-piece band for live appearances, one of which is this night at the Falcon. (Tim Berne and Greg Belisle-Chi jam November 6; Richard Lloyd’s Television tunes in November 9.) 7pm. Donation requested.

November 18 at the Bardavon

Well, here’s a solid bill that you can’t go wrong with. Performing the classic songs of The Band is the Weight Band, led by guitar great Jim Weider, a 15-year member of The Band and a long-serving player of the Levon Helm Band; sharing the stage of the Bardavon with Weider and crew for the occasion are two of the guitarist’s most famous fellow Helm collaborators, multi-instrumentalist and singer-songwriter Larry Campbell and singer-guitarist Teresa Williams. For a Thanksgiving-season, heart-and-hearth-warming Hudson Valley gathering, it gets no more appropriate. (The Hudson Valley Philharmonic plays a live soundtrack for Voices of Light (The Passion of Joan of Arc) November 6.) 8pm $29

November 19 at the Old Dutch Church

The Erick Hawkins Dance Company carries on the legacy of Erick Hawkins (1909-1994), a leading modern-dance choreographer and dancer who pioneered movement theory. “Presence of Light,” performed in the spectacular sanctuary of Kingston’s Old Dutch Church, will consist of five dance pieces with accompaniment from pianist Anton Fine.

A carefully curated selection of craftspeople selling their work, Hudson Valley Hullabaloo returns to the Andy Murphy Rec Center in Kingston for another year of handmade objects and holiday fun. Shop here for high-quality craft direct from local Hudson Valley artisans, such as Catskill Glassworks, L&M Studio, and Rural Modernist.

Hopefully you’ll have fully digested Thanksgiving dinner before you head out to see one of the most reliably controversial and outrageous comics of the past few decades. Despite playing a parody version of himself in TV and films, from Ford Fairlane to “Entourage,” the 2016 autobiographical TV series “Dice” revealed a vulnerable, more mature side of the shockmeister that carries through into his stand-up (a bit). Dice will surely be dishing out the classics as well at this Sugar Loaf Performing Arts Center appearance. Leave the kids at home.

This urban-chic-meets-new-rural extravaganza paved the way for Field + Supply and Phoenicia Flea. Nine years after its founding as an antidote to Black Friday at big box stores, it shows no signs of stopping. Basilica Farm & Flea is part timeless flea and farmers’ market and part 21st-century craft and design fair, with close to 100 vendors in 10,000 square feet of space.

Brooklyn art/dance pop band Rubblebucket will hold much appeal for fans of similar indie units like Vampire Weekend, the Dirty Projectors, Brazilian Girls, Gang Gang Dance, tUneE-YarDs, and Passion Pit. Anchored around the founding core of Alex Toth (trumpet, band leader) and Kalmia Traver (vocals, saxophone), the group has long been popular on the festival circuit thanks to their upbeat, foot-moving, ska/reggae-inspired rhythms. On the high-jumping heels of their 2021 album Earth Worship, they’ll shake up the Bearsville Theater this month. (Zero zips through November 2; Lissie lands November 5.) 8pm. $25.