Looking for things to watch while you shelter in place? These 14 series will give your watchlist the jumpstart it needs. 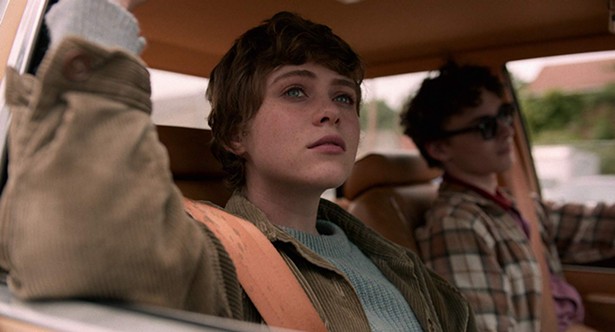 As the number of confirmed novel coronavirus cases continues to surge in New York State and across the US, health officials confer that the best thing we can do is stay at home and minimize our contact with others. If you’re anything like us, your Instagram feed has probably been flooded with overachievers using social distancing as a jumpstart to get back into to wholesome hobbies like baking and knitting, or to tackle dusty back-office projects like editing photos, building a new website, or reorganizing the closet.

While yes, it would be great to finally start working on that novel or finish that painting you left half-done in the attic, ya know what? Sometimes you just want to curl up on the couch with your fur babies and binge-watch some television. Looking for series recs? We asked our fellow Chronogram coworkers what shows they’ve been obsessed with lately. Here are 14 shows we're watching now, while at home on lockdown. Let us know what you're watching in the comments section below.

Editorial Director Brian Mahoney just binged "Hunters," on Amazon Prime, starring Al Pacino, about a group of Nazi hunters in 1970s New York. He says, “It's quite funny—a credit to showrunner Jordan Peele—and it's also a bit of wonderful time travel for a kid who grew up in New York in the `70s and thrills with nostalgia at its involcation.” He is also eagerly looking forward to dropping into the third season of “Westworld,” that futuristic dystopia of a series from HBO, which returned on Sunday, March 15. He says, “Nothing like slipping into that warm bath of misanthropy.”

Sales manager Lisa Montanaro is also devouring “Hunters” with her boyfriend. But as for her guilty pleasure? She dishes, “When my boyfriend goes to bed, I watch ‘Melissa & Joey,’ which is a super cute sitcom on Hulu, starring Melissa Joan Hart and Joey Lawrence, who have such great chemistry and give the show a comforting ’90s.” Busted.

Editorial intern Abby Foster says, “I’m obsessed with Hillary, the new documentary on Hulu because it is so revealing and she is so candid!” The four-hour film, featuring never-before-seen footage from Clinton's 2016 presidential campaign, paints an intimate portrait of a powerful and polarizing political figure, who went from First Lady to Secretary of State, and almost become the first female president of the United States. Foster is also catching up on the new season of “Brooklyn 99,” also on Hulu, which she likes for “its witty and light-hearted writing.” A perfect antidote to the panic and isolation many are feeling during this pandemic.

Office manager Molly Sterrs is shamelessly watching “The Vampire Diaries.” She says, in her defense, “Look, I know what you’re thinking. But yes, this shallow, unrealistic, poorly written show is the perfect thing to remove you from feeling literally anything about the real world.” OK, we’re listening. She continues, “It has the best mid-late 2000s soundtrack. Plus, everyone on this show, and I mean EVERYONE, is so impossibly beautiful that you can’t help but be mesmerized. I refuse to feel shame for this one.”

The River Newsroom staff writer Phillip Pantuso is all about “Occupied,” a Netflix series which he describes as a “political thriller about a Norway occupied by an EU-backed Russia to ramp up oil and gas production.” The storyline for this 10-part Nordic drama was conceived by bestselling author Jo Nesbø, who is best known for his series of Harry Hole detective novels.

Media consultant Susan Coyne is really feeling the Australian comedies. Her top picks? “Offspring,” about a 30-something obstetrician navigating the humorous ups and downs of modern life in Melbourne; “The Letdown,” about a new mom struggling to adapt to the sleepless realities and changing dynamics of motherhood alongside a cohort of quirky characters in her moms group; and “Rake,” about an drug-addicted criminal lawyer with a penchant for taking up the murkiest of cases.

Digital editor Marie Doyon recently inhaled “Crashing,” a 2016 British comedy series which follows a motley crew that, thanks to various unfortunate life circumstances, take up residence in a condemned London hospital. "Drama, tension, and hilarity unfold as this gang of oddballs navigate the challenges of cohabitation, relationship, and sexual tension," Doyon says. "The show is created by and stars the fabulous Phoebe Waller Bridge, that charming, self-sabotaging queen of tragicomedy that brought us 'Fleabag' (another MUST-WATCH) and 'Killing Eve.'"

Doyon also just recently finished binge-watching the Netflix series “I’m Not Okay With This,” based on the graphic novel by Charles Forsman. Her plot summary: “In the wake of her father’s suicide, amidst tense family dynamics, an outcast teenager slowly realizes she has superpowers (which she doesn’t know how to control). Think ‘Sex Education’ meets ‘Heroes.’” The show’s ‘Dear Diary’ format offers amusing narration as Sydney navigates the tumult of high school, making unexpected friends, exploring her sexuality, and struggling with her nascent powers. She adds, “There are some great characters (Stan, you legend) and an awesome soundtrack. Plus I love that it seemingly starts off as a light YA series, but by the end you’re left seriously wondering, ‘How dark and f*cked up is this going to get?’"