The aunt of gallerist Mark Gruber, Ruth Gruber (1911-2016) was a trailblazing photojournalist who spent her life documenting topics related to humanitarian causes. At one time a correspondent for the New York Herald Tribune, Gruber subsequently shifted her attention to the lives of refugees and to issues of rescue, sanctuary, and liberation, devoting her life to humanitarian causes during World War II. Recipient of the 2011 ICP Infinity Awards Cornell Capa Award, these photos are drawn from Gruber's private archive spanning more than half a century on four continents. At Mark Gruber Gallery in New Paltz.

"'Built' Architecture in Art and Design" at the Lockwood Gallery

Lockwood Gallery's ebullient press release states that: "At the heart of 'BUILT' lie our deepest questions and preoccupations with the spaces we inhabit: questions of function and ornament, access and exclusion, impulse and restraint, play and severity." Nine powerhouse artists, designers, and architects have been enlisted to realize the promise of this ambitious concept led by Tom Fruin, whose colorful water towers and house-like structures made of plexiglass, steel, plastic, and scrap material bring new life to seemingly dreary environments in Brooklyn and across the country. Other works include architect Richard Scherr's elegant sculptures, which suggest models for impossible buildings and Jeanette Fintz's paintings, which balance urban elegance and natural lyricism.

Photowork: Beyond 20/20" at Barrett Art Center

The latest iteration of this annual survey, now in its 33rd year, highlights the art of contemporary photographers working throughout the US selected by Shoair Mavlian, executive director of Photoworks UK. Mavlian chose 40 photographs for the show, including several examples of social commentary. Included among these is Ellen Jacob's Alajandra, which depicts a young advocate for immigrant rights—brought to the US from Mexico as a baby yet recently detained by ICE—with her back to the camera facing a brick wall, defiantly raising her fist.

"Hot/Cold," curated by Tracy Leavitt, includes 11 different artists, some of whom use wax in its hot, fluid state known as encaustic, some of whom prefer to work with it in its more viscous form called cold wax, and some who utilize both forms in the same artwork. Hot, cold, or in-between—several cool pieces are on view, including Dietlind Vander Schaaf's elegant abstraction composed of Zen-tinged mark making, Regina Quinn's subtly textured landscape, and Judith Hoyt's translucent wax and collage work.

According to the JDJ website, "ALWAYS is a metaphor for relationship: the relinquishing of control, the freedom found in parameters, the inevitability of miscommunication and loss, the roles of time and chance, and the necessity of trust." A visitor will find two projectors rotating full 360 in opposite directions flashing images in RBG from Kwartler's and Roeck's art reference files. For brief moments, the images overlap. Neither artist has collaborated with another artist before. The visitor is also a collaborator entrusted with putting this all together. Clues can be found by ascending to the gallery's loft to find examples of each artist's still work: Kwalter's Snowflake paintings—spare means/colidescoping meanings; and Roeck's Inferno drawings—carefully rendered with discrete sub-sections, against grids that are sometimes manipulated to create spatial illusions.

"Translations" at the Albany Center Gallery

The quirky human practice of translating commonplace visual reality into abstract form is the subject of this five-person show. Artistic practices developed over time may be repeated again and again, but somehow the better artists never seem to do exactly the same thing more than once. Consider the work of Beth Humphrey, who as education curator of the Woodstock Artist Association spends a good deal of her time fostering the creativity of children. Humphrey brings an adult playfulness to her fearlessly chromatic and boldly inventive wall pieces that bridge the conceptual gap between micro and macrocosm. Humphrey doesn't step in the same cosmos twice. The other ingenious abstractionists whose work is on view are Stephen Niccolls, Victoria Palermo, Stacy Petty, and Anthony Ruscitto.

"Collecting Local" at the Samuel Dorsky Museum of Art

It's no secret that there are many very talented artists living and working in and around the Hudson Valley. In recognition of this fact, the Dorsky at SUNY New Paltz has been adding works by local luminaries to its permanent collection every year for the past 12 years through the Alice and Horace Chandler Art Acquisitions Fund. The Chandler's vision is: "to encourage students and the wider community to engage with the living arts of our region." Art is chosen for the Annual Purchase Award from works juried into the yearly Hudson Valley Artists exhibition. "Collecting Local," curated by Anna Conlan, allows the public to see these outstanding artworks displayed together for the first time, including examples of video, photography, sculpture, prints, and paintings. Some of the artists whose work is on view are Charles Geiger, Libby Paloma, and the team of Curt Belshe and Lisa Prown.

Apperception, the process of understanding something perceived in terms of previous experience, is the target of William Stone's self-described "wry" assaults on the way we encounter the everyday world. On view at Hudson Hall are works by Stone, going back as far as 1990, that deconstruct, then reconstruct utilitarian objects to give us a gentle (and sometimes not-so-gentle) jolt out of our habitual thought patterns and emotional responses. One such reconstruction transforms a once sat-upon object (a chair) into an abstract incarnation of a sitter whose shapely legs dangle over the edge of the pedestal where it is perched. Another piece, Shared Stair—literally linking two separate sets of stairs—boggles perception, triggering an automatic hesitation response not unlike fear.

JoAnne Carson: "Rise up and Shine" at Opalka Gallery

On the Hudson Valley's ever changing map of art, it's a long paddle upstream from the reverent vistas of Thomas Cole to the rollicking floral freak show of JoAnne Carson. The former saw the sublime in nature, the latter seems to have drunk the nourishing Kool-Aid first served-up by Pablo Picasso who famously said that instead of imitating nature he worked like nature, creating form instead of mimicking it. "Rise Up and Shine" covers 25 years of Carson's seriocomic fecundity, which has manifested in assemblage, sculpture, and painting. 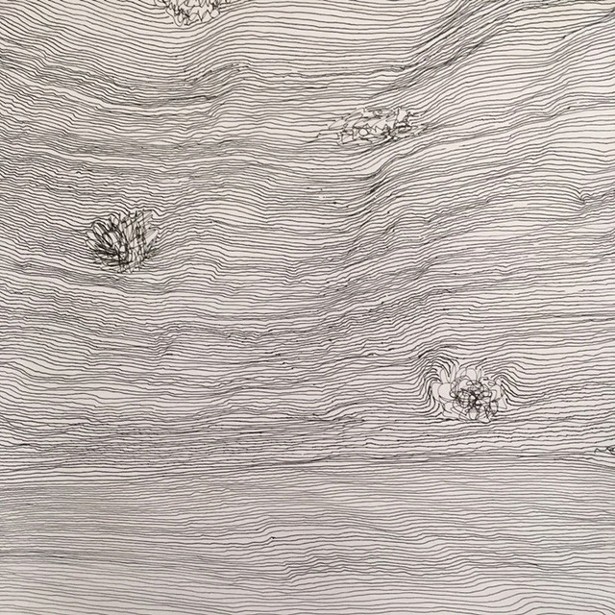 The parameters of abstract art are many and varied and Meredith Rosier has been teaching its ways and wonders at the Woodstock School of Art for some time now. Rosier has opened the eyes of many artists to abstraction's expressive promise and now she has curated a show of nearly 40 regional practitioners at Pinkwater Gallery. Scott Clugstone's Gorky-inflected mixed media work Audacious Torque, Carol Pepper Cooper's distinctive Yearning rendered in collage, ink, and charcoal pencil, and Roxie Johnson's Adrift, which evokes vast space in a small work, are some of the highlights.

What's past is still present in Doug Navarra's inclusive gaze. His works in gouache, pencil, and ink on antique paper—which he masterfully reconstructs and then embellishes with inventive contemporary mark-making of his own devising—are invitations for close inspection for the inquiring eye and engaged contemplation for the probing mind. Matt Frieburghaus engages the history of the earth—past, present, and future—which he found compellingly expressed in the Icelandic subarctic and Low-Artic landscapes which he visited three times between 2014 and 2018. Employing 3-D wall projections, objects made from 3-D printers, and video projections with sound, Frieburghaus evokes the vanishing presence of our natural world.