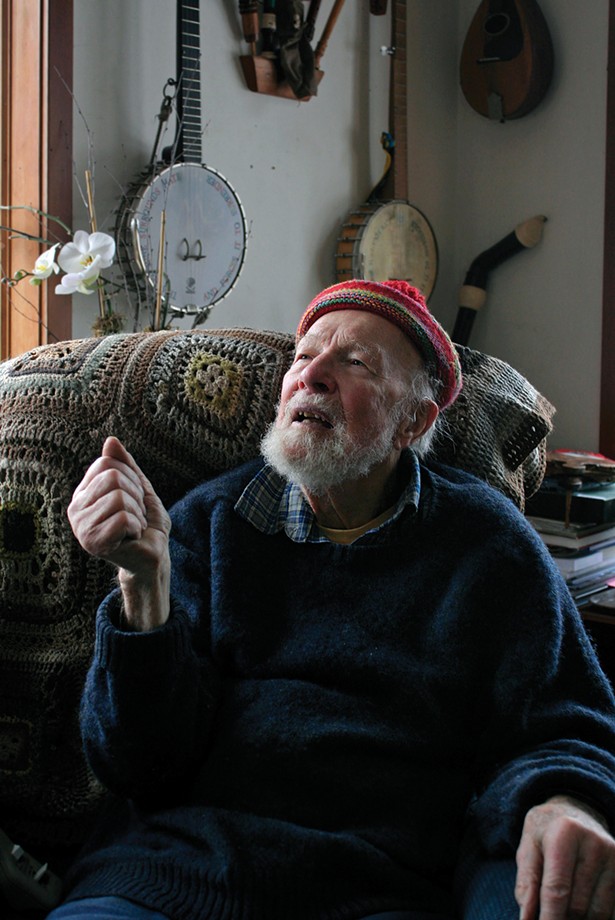 On May 3, Pete Seeger would have turned 100 years old. America's most iconic folksinger, a tireless social/environmental activist, and a proud Hudson Valley resident, Seeger died in 2014 at the age of 94. Beloved by locals, who over the decades encountered him at the countless cause-touting concerts, marches, and casual hootenannies he loved championing—or even just bumped into him while he was out running errands in his hometown of Beacon—Pete left a bittersweet, unfillable hole in our hearts when he passed. And lord, how we need him now.

But, of course, Pete Seeger hasn't really gone away, and he never will. Like Tom Joad in The Grapes of Wrath, a character whose peripatetic quest for justice seemed to mirror Pete's own, he is all around us. Through his songs and the music identified with him—"If I Had a Hammer," "Turn! Turn! Turn!," "Where Have All the Flowers Gone," "Talking Union," "Which Side Are You On?," "We Shall Overcome," and so many others—his legacy embraces and inspires us. It is a constant reminder of our duties to each other as fellow human beings and to the planet we all live on.

On June 15 and 16, Clearwater's Great Hudson River Revival returns to Croton-on-Hudson. Dubbed the Clearwater Festival for short, this annual, family-friendly musical gathering celebrates and raises funds for Hudson River Sloop Clearwater, an environmental organization Seeger cofounded. But before that, May brings a wealth of concerts and events all across the country honoring the centennial of his birth. Below is a selected regional roundup.

"Steering Pete's Course: Maritime Songs from the Seeger Song Bag" with the Rix (Captain Rick Nestler and Rik Palieri). The Underground at Proctors. May 3, 7:30pm. Proctors.org.

"If I Had a Hammer: A Celebration of Pete Seeger on His 100th Birthday." Singalong hosted by the Nields to benefit Pioneer Valley Habitat for Humanity's Interfaith Build. May 3, 7pm. Pvhabitat.org/events/peteseeger.