A fter hearing Rudolph Steiner give a lecture in the spring of 1919, factory-owner Emil Molt invited the Austrian-born teacher and philospher to establish a school in Stuttgart, Germany. September 19 marks the 100th anniversary of the founding of die Freie Waldorfschule, the first-ever independent Waldorf school.

Three years after Steiner's death in 1925, the first Waldorf school in North America opened its doors. Nearly a century later, there are over 1,000 Steiner schools in 64 countries—each independent, some very different from one another, but all aspiring to create healthy and balanced learning environments that cultivate clear thinking, balanced emotions, initiative, and perpetual curiosity. The Hudson Valley has a concentration of thriving Waldorf schools including Mountain Laurel in New Paltz, Primrose Hill in Rhinebeck, Green Meadow in Chestnut Ridge, and Hawthorne Valley in Ghent.

Related Heads of Private Schools Reflect on the State of Education

Heads of Private Schools Reflect on the State of Education
Local private school officials share their strategies for teaching the future's bright minds.
By Anne Pyburn Craig
In the Classroom

While not every century-old concept keeps its freshness (1919 also saw the birth of Prohibition), Steiner's insights about nurturing young minds have not only held up well, they've been reaffirmed over and over in state-of-the-art brain science research and pedagogy. When Harvard education professor Howard Gardner released his multiple intelligence theory in 1983, which posits that intelligence can be split into several modalities including visual-spatial, verbal-linguistic, and bodily-kinesthetic, it was hailed as revolutionary. But this wasn't news in Waldorf circles. "In the Waldorf movement, the reaction was a big 'Yay! Wonderful,'" says John Greene, head of faculty at Great Barrington Rudolph Steiner School. "It was a sense of recognition that what Rudolf Steiner was trying to articulate has merit and was being more widely recognized." 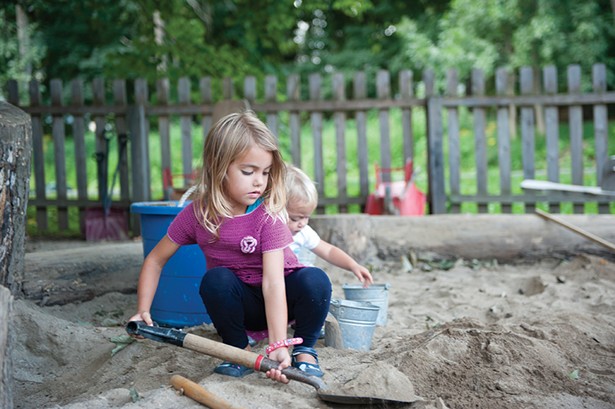 The importance of art and music in brain development is central to Waldorf schooling. Art provides children with unstructured moments in which they can simply play, strengthening their muscles of creativity and imagination. Students in Steiner-based schools begin learning flute or recorder in first grade and are encouraged to consider adding a second instrument in third. "If the brain is a muscle, then learning to play an instrument and read music is the ultimate exercise," wrote researchers from the University of Southern California in 2017, summarizing the results of two cutting-edge studies from the Brain and Creativity Institute.

Many Waldorf schools also teach eurythmy, a method of harmonizing physical movement with speech or music through exercises, patterns, and games, as a teaching tool. (Yes, Annie Lennox studied eurythmy as a child long before forming a band with David A. Stewart.)

The Waldorf approach to development is holistic, balancing the mind, body, and spirit in equal measures. Nature- and farm-based learning is weaved into curricula at Waldorf schools around the world. Hawthorne Valley Waldorf School uses its 900-acre biodynamic farm as a living classroom for the hands-on study of ecology, agriculture, biology, and art.

"Early computer use doesn't do anything for brain development," says Hawthorne Valley teacher Karin Almquist. "We want students to slow down, open their senses, hear the leaves rustle, smell what's blooming." This focus on mindfulness is woven into the fabric of Waldorf schooling. The Association for Mindfulness in Education lists 14 research-backed benefits of infusing schools with the practice, including increased self-esteem and emotional regulation.

At its core, the Waldorf approach holds space for children to develop curiosity through experiential learning. Children in the early grades gain familiarity with letters and numbers through play, drawing, singing, and verse. "We take the children exactly where they are on their developmental journey and guide them," says Christianna Riley, a teacher at the Great Barrington Rudolf Steiner School. This sentiment is echoed by Ingrid Almquist, a teacher at Haleakala Waldorf School.

Related Get Out!: Place-Based Education in the Hudson Valley

Get Out!: Place-Based Education in the Hudson Valley
Often, school-aged children led by the organization Wild Earth will be directed to split up and find their "sit spots," places to rely solely on their senses to feel closer to nature.
By Timothy Malcolm
Education Supplement
"In the earlier grades the length of time that children are expected to sit still and concentrate is far shorter than it would be in a public school setting," she says. "In grades one to three, 'circle time' activities begin the day, so that even though the children are learning, they are also moving around and generally on their feet, not sitting."

The highest goal of education, Steiner wrote over 100 years ago, is "to develop individuals who are able out of their own initiative to impart purpose and direction to their lives." Imagine, for a moment, what a world full of such individuals could look like.