The art of site-specific installation is highlighted this month at the exhibition venue best known as the Ice House. Owner Jayne Drost Johnson notes that the compound of mostly small buildings once functioned as servants' quarters for an estate and remarks that it was a live/work space then and remains for her a live/work space now. In the visually striking Ice House itself, California-based Joe Zorrilla is installing three works, one of which is entitled The Wish and the Deed#4 (sun, moon) and will hang from the impressive building's 20-foot-tall beams. "Enigmatic" would be one way to describe Zorrilla's work, which Johnson categorises as bricolage—a practice that makes use of found objects. Think of it as a refined visual sauce, a reduction, with hints of existential musings, cooked up to encourage an open-minded response. Across the way in the modest Cottage space, Japanese-born artist Shino Takeda is showing handworked pottery with colorful glazes that reflect her sensory responses to the landscape surrounding the gallery. Also on view is Takeda's new fabric-based work which charmingly bridges the distance between the traditional Japanese patchwork technique Boro and the 20th-century Western avant-garde movement Suprematism.

Those familiar with the work of Christie Scheele will know her paintings of water, which are distinguished by their purposeful simplicity, subtly expressive use of color, and compositional sophistication. Her current exhibition at Shahinian goes beyond celebration of nature's fluid beauty in order to " focus on our environment and the challenges it faces." To take on this expanded mission, Scheele has created an interconnected web of works in multiple media representing water in many guises both natural and human impacted, from mountain watersheds to industrial contexts and shining seas. She also provides handmade maps as a wayfinding tool to both navigate the exhibition and to "help us find our way" through the glimmering surfaces of her work to the deeper call to action that lies beneath.

When considering the abstract paintings in the Stephen Niccolls solo show "Informalism" at John Davis Gallery, you might want to ponder a quote from DeKooning about Mondrian, "that great merciless artist...the only one who had nothing left over." And also, perhaps, the phenomenon of synesthesia. It can be argued, and Stephen Niccolls's work seems to be doing so, that the ideal of eliminating all illusion from painting is kind of impossible to achieve, since seeing itself is illusory. So yes, there are willful (but open-ended) compositional ambiguities in Niccolls' beautiful arrangements of form, adorned with his signature palette of reds, blues, yellows, and all their complementary cousins showing-off, unafraid to be themselves. Synesthesia? Well, there is certainly a color in one of the paintings that tastes like raspberry. You may indeed taste, smell, hear, and feel other unexpected sensations as you treat yourself to the feast that is Stephen Niccolls solo show.

These days, being hopeful is getting harder and harder with each news cycle, but street artist Scout is giving it a shot. He notes that it is "important to find something local and grassroots to focus your energy on where you can see actual change." Lately, the graffiti-meets-folk artist has been focusing on large canvases rather than the reclaimed materials he has previously favored, but the politicized layered mix that is his hallmark remains the same. In "There Is Nothing in the World More Dangerous than a Defeated Army Heading Home," two partially overlapping faces vie for our attention, one of a young contemporary man looking directly at the viewer and the second a stenciled period piece from Midcentury America—a young boy pledging allegiance. The placement of the young boy's hand seems to be silencing the young man. Is this a reference to blind patriotism silencing legitimate grievance, or does it point to a conflict taking place in our collective psyche and that of the artist himself? Or both? Look for signs of the complexity of our times in the works that Scout has brought back from the front.

River Valley Arts Collective: "It's Necessary to Talk About Trees"

The recent formation of River Valley Arts Collective reflects a trend of top art professionals migrating from New York City to our region to join our already burgeoning arts community. Lead by Alyson Baber and Candice Madley, RVAC is promoting art rooted both conceptually and materially in our local environment. Their September offering at Foreland is a group show with a title borrowed from poet Adrienne Rich extolling the virtues of locality. Included in the exhibition are works by the likes of Polly Apfelbaum, Osi Audu, Padma Rajendran, and Arlene Shechet. To quote Rich's poem, "this is not somewhere else but here." Words to remember when contemplating the cultivated art in this locally sourced exhibition.

Painter John P. Murphy (1934-2013) covered vast stretches of visual territory during the more than five decades of his career. Throughout this stylistic journey, he maintained a vigorous approach to composition rooted in his knowledge of graphic design and a fearless use of color. Beginning with landscapes that eschewed detail in favor of feeling, he moved on to figure painting, influenced by his admiration of German expressionism. The muse for the latter was his wife of the time, and there is nothing prudish about the raw energy with which he embraced the depiction of his subject. Those who take the time to absorb this body of work piece by piece may come to appreciate the range of emotions expressed. Others may be drawn to the succeeding abstract works, which convey a no-nonsense, no-frills approach to visual truth. Murphy's later years brought paintings bridging the gap between representation and abstraction, including inventive spatial interpretations of railroad imagery and aerial views circling back to his days in the Air Force. Lovingly presented to the public by his daughters and granddaughter, "A Life Celebrated" is a testament to a skilled practitioner and true believer in the power of art.

The Seligmann Center, through September 28

Several of the large paintings in Raul Serrano's show at Wired have almost balanced compositions; left and right. Everything in these works is just off, which is correct enough because a-kilter is Serrano's gaze, which seeks neither narratives nor realism. Take Eau de Vie, depicting a woman's red and very pregnant body split not quite in half by an oh-so-slow pour of...is it water or is it brandy? Whichever you choose, the mood evoked arises from the intoxicating depths of the unconscious. The tiny couple that hovers mid-canvas is also bifurcated, like the male and female polarities of creation itself. Take in the silence. Peruse. Stuff will definitely be happening in your head, but if you're seeking meaning in Serrano's paintings, abandon certainty and tilt in the direction of your poetic heart.

A relative newcomer to our region, Lucy Holtsnider rides in with splashes of saturated color for her first solo show on the East Coast. The collages included in "Blind Spots" are composed of overlapping, vibrantly-hued shards of fiber-based handmade paper, which she created and printed during a residency at Women's Studio Workshop. Holtsnider states that her use of color references "the textures and hues of a warming planet" and "conjure associations with a sense of place, topographic maps, and climate change." Be this as it may, when you visit Women's Work to take in Holtsnider's chromatic eye poppers, you will definitely feel the heat.

The use of text in visual art, employed by Cubists, Surrealists, Dadaists, Conceptual artists, and Pop artists in the 20th century can still be fertile ground in the 21st as demonstrated in the exhibition named, illustratively, "TEXT" at Ann Street. Ad gurus are keenly aware that the esthetics of typography can hone the meaning of copy which, when married to the appropriately emotive image, can lead to a powerful motivational synergy. Some contemporary artists use this commercial strategy subversively in an effort to expose the limits of this commodity culture gambit. The 18 artists in TEXT are up to many things with their word inflected imagery. Visitors will see examples of pure love of the beauty of typography, the sway of "POWER" writ large in cuddly pink sculpted caps, and text whirling around, Jackson Pollock-style in a blizzard of incomplete messaging. You may choose to be on the lookout for works that employ words in conjunction with form to lead you to a space dominated by neither. One where you can employ your own eyes and mind to find meaning in this inviting word and image game.

"Industrial Spirits," now on view at Hurley Motorsports in Kingston, is a 20-year chronicle of Robert Wogan's light installations. The photographs, which showcase abandoned relics ranging from power plants to sunken ships, are a study in our society's short attention span. 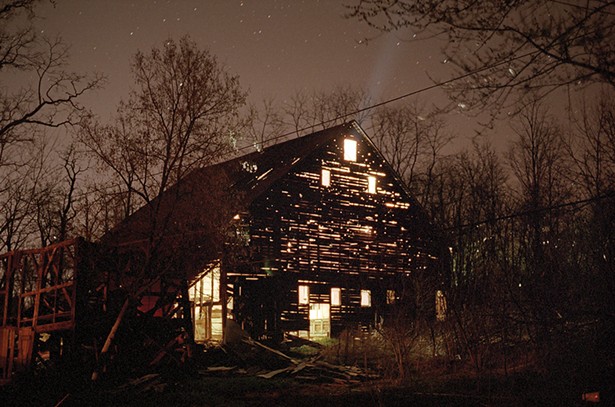 Artist Notes: The Palen Barn is estimated to have been constructed in the 1690s. Typically Dutch barns were constructed before homes as they housed the provisions for a family's survival. After leaving the urban environment of New York City and starting a family, I looked for new sites to reimagine with light. This barn was located on our property and allowed me the opportunity to see sunlight penetrating through the siding. I knew that lighting this magnificent piece of history from the inside out would be magical.