"How We Live" at HVMOCA

The premise of this exhibition is that artists are at the nexus of change, assimilating the status quo and transforming it through their practices, thereby helping to produce the new reality ad infinitum. Since the 33 artists whose work is included come from 19 different countries, each with its own heritage and culture, there are many disparate realities to be assimilated and transformed. As is often true at HVMOCA, there are several certified art luminaries on view, including Oldenberg, Flavin, Bourgeois, and Harrison.

"Without Fear and Full of Love" at Beacon Artists Union

Photographer and poet Meghan Spiro is among the one in four women who has been a victim of physical violence inflicted by an intimate partner. The 23 mixed-media self-portraits in Spiro's exhibition constitute an autobiography of her efforts to overcome "PTSD, addictions, and self-loathing." In one of these, Spiro appears with her head bowed, eyes closed, entangled in black yarn, encircled by images of anger and abuse. In the end, however, Spiro's is a tale of redemption, of triumph over demons both external and internal.

Ernest Frazier at The Lace Mill

An artist of color and a Vietnam veteran, Ernest Frazier (1942-2004) had demons to deal with, but in his art, they were under control. His vocabulary of decisive mark-making and refined compositional skills is demonstrated throughout this exhibition of 50-plus works. Look for a painting dominated by orangey-pink, with a totemic figure roaring to life via a minimal number of well-struck brushstrokes. The painting is missing its lower left corner—not a whim but the considered cut of an artist at the top of his game.

Society's communication breakdown is mirrored in the visual witticisms of Norm Magnusson's work on view at CMA. Take, for example, I'm sorry, a thousand times I'm sorry, a piece created by the artist literally overwriting "I'm sorry" one thousand times in the middle of a very nice piece of watercolor paper, thereby rendering the sentiment unintelligible. Magnusson is proffering 14 of these enigmatic but ultimately enlightening head-scratchers for consideration. Wear your thinking cap and bring along your decoding ring. Deciphering the message is worth the effort.

"Photography in the Abstract" at the Center for Photography at Woodstock

As its contribution to the five-venue suite of exhibitions "Woodstock Collects," CPW highlights three Woodstock photographers who, in the 1930s, moved from Pictorialism to abstraction. Konrad Cramer led the way by making images from sound in a process he developed called the "sympalmagraph." Delineating an invisible physical reality rather than capturing an object as the eye perceives it, the sympalmagraph expanded the reach of Cramer's photography. Camera and darkroom experiments by Manuel Komroff and Nathan Resnick, the other two photographers in the show, are equally intriguing.

"The Dye Garden" at the Neuberger Museum

In the 1960s, American post-war artist Frank Stella went to Morocco on honeymoon and later created paintings inspired by the Arabic tiles he saw. Resisting the prevailing modes of power and extractive economy of the world, Moroccan-French multimedia artist Yto Barrada sees these works of Stella as appropriation. Several of her pieces on view at the Neuberger are reappropriations of Stella's work, which can be seen as sly putdowns of Orientalism in general and synchronously beautiful reassertions of the authentic Moroccan reality underlying this cross-cultural give-and-take.

Large works by innovative abstract painter Sam Gilliam, who first came to prominence in the 1960s, are currently on view at Dia:Beacon. Two of Gilliam's unstretched Drape paintings hang from the ceiling, interacting to create one site-specific installation entitled Double Merge. Also exhibited is Spread (1973) from Gilliam's wall-mounted Beveled-Edge series. Both works occupy a netherworld between sculpture and painting, creating a formal ambiguity that opens up possibilities of direct unfiltered experience; color liberated and form unfettered, unmitigated by the mind's desire to name and categorize.

Democracy is going through difficult times in many parts of the world. Mokgosi contemplates this reality via the genre of history painting augmented by "cinematic tropes, psychoanalysis, and post-colonial theory." His focus: how democracy plays out in southern Africa. His goal for the Democratic Intuition project, which he has been working on since 2014, is to address the timely question: "How do normal people understand, reciprocate, have access to, and not have access to the ideas [and levers of power] of democracy?" 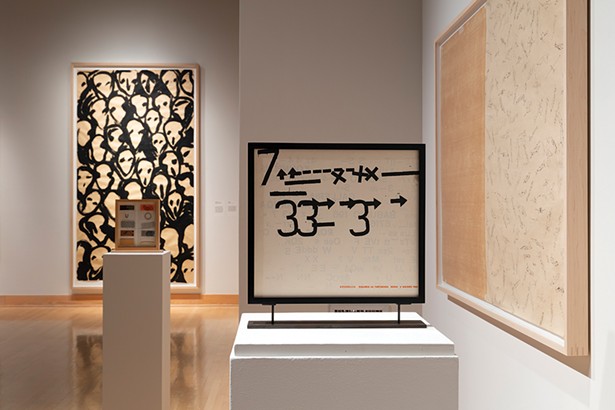 Arte Povera, which began in Italy in the 1960s, was championed by artists who embraced the use of everyday materials and eschewed the industrialized detachment of Minimalism. Alighiero Boetti, Pier Paolo Calzolari, and Jannis Kounellis considered works on paper not as preparatory for realization in another medium, but as finished works of art. Paper is seen as an extension of the physical world where art happens and the history of a more than 2,000-year-old culture lives on in the erudite movements of an artist's hand.

In 1951, the "9th Street Show" shook the art world by establishing the importance of Abstract Expressionism. Of the more than 60 artists exhibited, 11 were women. With "Sparkling Amazons," the Katonah Museum has brought together art by all 11 for the first time in 68 years. Many of these women artists, such as Lee Krasner and Joan Mitchell, went on to become well-known while others, like Perle Fine and Anne Ryan, never quite reached critical acclaim. Important gems and scintillating surprises from both groups are on view.