July 01, 2019
Last Updated: 07/11/2019 1:15 pm
comment
The Hudson Valley is bursting with creative energy all year round—so it's no doubt that the artistic activities hit a boiling point during the summer months.

For those of you looking to get a culture fix, check out these 10 art exhibits coming to a gallery near you this July.

Sampling four bodies of work completed over the past five years, this solo show of photographs traverses an ambitious swath of thought-provoking territory: "the origins of life, scientific discovery, myth, and fate." D'Arpino's perspective is heavily informed by his studies in geology and paleoclimatology (the study of changes in climate taken on the scale of the entire history of Earth). The four sections of the exhibition include: Brutalist Acropolis, a look at his family's proud artisan history in Albany, mingled with reminders of the history of white flight and the dislocation of minorities; Nucleation, centered on organic design and its influence on human design; Ekphrasis, based on Homer's accounts of the Trojan War; and Abiogenesis, explorations of the boundary between living and nonliving. True to his artisan heritage, D'Arpino's conceptual ambition is matched by his mastery of the tools of his trade, yielding superbly lit and composed photographs of both beauty and depth.

Danny Goodwin is a serious dude. Looking at one of his large doctored photographs, you may think you are looking at a surprisingly striking image of a roll of duct tape, but in reality, you are taking in an "interrogation of photographic veracity and a critique of authoritarian power." Upon closer examination, the roll of tape we think makes pictorial sense is actually replete with contradictions and falsehoods. Given the post-truth world we are trying to navigate, it's harder and harder to know what is real and what is not, and would-be authoritarians use this as a weapon in the service of narrative manipulation. Goodwin's wake-up call is that seeing should not be believing. Using technologies like texture mapping, 3D printing, and augmented reality, in addition to photography, he creates a false reality, making it hauntingly overt how easily deception is achieved.

A visitor to September Gallery was once asked by Kristen Dodge to free associate on the color yellow. Dodge, the owner and curator of the Hudson gallery, was then conceptualizing the show now on view. The 14 talented artists whose work she has assembled (including Brenda Goodman) have answered the chromatic call in various hues of meaning and observation. In her writing about the show, Dodge herself sees everything from egg yolks to yellow journalism in this little buttercup of a color, and traces its history from a yellow ochre horse on the walls of the caves of Lascaux through a patch of light on a wall in a Vermeer painting rhapsodized by Proust. The work on view is distinctly of our time by artists who thankfully have cast the amber of caution to the wind.

"Water in Art" at Mark Gruber

In stressful times, simple things can bring comfort, or at least things that appear simple on the surface. Anyone who has actually attempted to paint a cloud, or render the shimmering surface of a stream in watercolors will attest to the impressive skill sets of the many artists on view in this group exhibition. Take Staats Fasoldt who, like a Zen master, can evoke the aesthetic aspect of H2O with just a few deft strokes of his brush. To see one of Jane Bloodgood-Abrams's illuminated clouds is to believe. This is an exhibition directly expressing the beauty we can find right here in our region and, in so doing, helps us rediscover what we may be missing, overwhelmed as many of us are by the perpetual swirl of news cycles.

"Madness in Vegetables" at the Dorsky

You may think of veggies as healthy, but did you know they can also be crazy? The title of this show references a poem by 19th-century French writer Francis Jammes who chose inspiration from the natural world over the sophisticated concerns of urban art. Curators Alyson Baker and Candice Madey selected 17 artists from our region who explore the natural world from divergent vantage points using a variety of conceptual maps. The politics of moving upstate, the looming catastrophes of climate change, the weird beauty of plant life, the footprints (and fingerprints) of anthropomorphism, and the heady poetry of the wild demarcate the territories explored.

Many people think that collage began in the 20th century with Picasso and Braque, but in fact, it has been an art form for centuries. That said, the Cubists, Dadaists, Surrealists, and Pop Artists of the last century made extensive use of collage techniques, as do digital artists of all stripes in our current era of Photoshop alchemy. The collage gambit is arguably at its most interesting when disparate signifiers collide, leading to unexpected shards of meaning. Expect multiple brain warping experiences at the Barrett Center where 31 contemporary practitioners, chosen for this national juried show, are exhibiting assemblage, photomontage, mixed-media, and installation.

"David Shrigley: To Be of Use" at Art Omi

An artist Roomba, perhaps a renegade from the cleanliness-obsessed family of robots, retrofitted with a set of markers, tirelessly creates artifacts for display on the Newmark Gallery walls at Art Omi. An outsized phone devoid of zeros challenges viewers to make a call. There are guitars that don't play right and a calculator that can't add (only subtract). Welcome to the world of David Shrigley. The British artist is best known for his cartoonesque drawings and slyly subversive pieces that objectify the absurdity of prosaic human interactions. Shrigley once reported being asked, "How can you be a famous artist if you can't draw?" If you're looking for the answer to that question and also wish to experience more than one or two knowing smiles (seasoned with really deep thoughts), this show is for you.

"Never Was a Slave" at Historic Huguenot Street

Born in New Paltz in 1829, Jacob Wynkoop was one of the first African Americans to buy land in the village. The son of former slaves, he served in the Union Army during the Civil War, was a political organizer for the local black community, and a builder of multiple homes in the late 19th century that still define a neighborhood in the village of New Paltz today. An exhibit at the DuBois Fort Visitor Center of the Historic Huguenot Street district, curated by Josephine Bloodgood, Director of Curatorial and Preservation Affairs at HHS, uses historical documents and photographic materials to illuminate the extraordinary legacy of Jacob Wynkoop and his family.

In Plato's Phaedrus, Socrates uses an allegory of a chariot drawn by two winged horses flying toward heavenly realms to explain the journey of the soul. In the Katha Upanishad, a parable with a similar message appears. Paola Oxoa, co-founder and owner of Mother Gallery, "finds it curious" that these two ancient texts both use the same symbol to "teach what we may be beyond meat and bones." The works by the nine artists in "Soft Temple" use the human figure as a jumping off point to address the question "what are we?" But don't expect much literal figuration or, for that matter, simple answers. The art provides the questions, answering them is up to you. 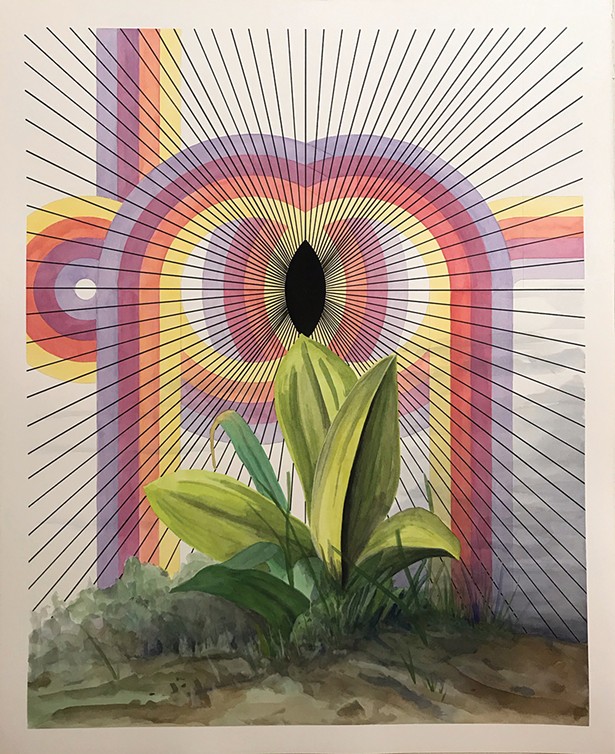 Mind expansion comes in many forms and at least four slices of the same are provided by artists Kelsey Renko, Jenn Brehm, Brent Owens, and Jon Cowan in the "Mystic Pizza" exhibition currently being served up at LABspace. Yes, those are googly eyes at the bottom of that shimmering diamond abstraction by Renko, and Cowan's voids are indeed radiant as voids most certainly should be. Watercolors can be trippy, as Brehm demonstrates skillfully, and wood can bend in colorful ways when Owens sees the light. So come on down to Hillsdale town and get a contact high from the mind-blowing art on view.