10 Hudson Valley Exhibits to Check Out in August

Care to inject a bit more culture into your August? We've curated a selection of exhibits—from experimental to contemporary to multimedia—that will give you a taste of the diverse artistic offerings shown off throughout the Hudson Valley.

Add Culture to Your Summer with These 10 Exhibits to Check Out This July
A Hudson Valley gallery guide for July.
By Chronogram Staff
Visual Art

Jim Watt at One Mile Gallery

As an architect, Jim Watt relies on scale drawings and models as functional representations, but he also finds them beautiful as artifacts of spatial delineation. As a painter, Watt is free from practical constraints like the proper placement of load-bearing walls, enabling him to take a freewheeling approach to line and the application of oil paint to canvas. That said, he is keenly aware that without discipline, the whole enterprise can collapse into mud. Watt references Di Chirico as an inspiration, and while his own palette is a good deal sunnier than the Italian surrealist's, and the mood more upbeat, he does share a passion for the representation of form and space. Watt's path through pictorial space is decidedly modern and built by push-pull and gesture rather than surrealist perspective gambits. You may find his paintings interesting terrain for your eyes to take a walk. Through August 31 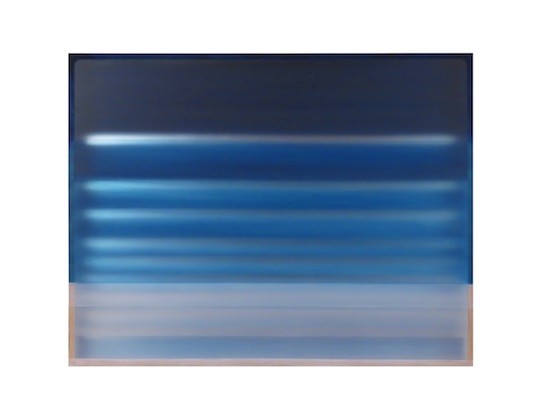 One could see Hutchinson's past work as a 21st-century manifestation of the Luminous branch of the Hudson River School. Indeed she describes her work on view at 11 Jane as "luminous paintings" and most certainly shares a love of the light in our region with these 19th-century artists. However, with the work in this exhibition, Hutchinson questions her previous "all-out search for LIGHT" (her caps), and she eschews the beeswax she has been using for many years "for all sorts of technical and environmental reasons." Although her work remains reductive, having always emerged from her observations of nature, lately she has come to a deeper realization that the prismatic epiphanies she seeks are dependent on an underlying darkness. This darkness has a physical dimension and also refers to the shadow self, which is the necessary background for inner light if it is to be found. Hutchinson remains acutely aware of the changes that the constant play of light and dark has on her work as it is seen over time and has developed new materials that bring these changes to the fore. August 10-September 1

Nil Yalter at the Hessel Museum at Bard

A female figure framed on-screen so that only her midsection is visible. On her skin she's written, "a woman's sexuality is both convex and concave," and then set those words in motion by a full-tilt belly dance. While this could easily be a description of the latest viral video on YouTube, it is actually a 40-year-old work of art by Turkish artist Nil Yalter, Created in 1974 in Paris, the video is entitled The Headless Woman (aka The Belly Dance) and is considered a feminist classic. It's on view at the Hessel Museum along with over 20 other groundbreaking projects by Yalter from the late '60s through the early '80s covering such topics as the living conditions of immigrants, women in prison, and transgender identity that still resonate in 2019. Yalter who makes use of diverse media including the aforementioned video, photography, large-scale collages and installations is a veritable trailblazer, and as it happens, she is currently blazing in our neighborhood. Through October 13

In case you've missed the headlines, we have about 11 years to deal with climate change or face irreversible consequences. Zachary Skinner's solo show "Anthropocene Drifter" is a powerful reaction to this horrifying reality. It's part installation and part painting exhibition with both components working together in contemplation of a dystopian future where, alas, we didn't get Mother Nature's message. Susan Walsh takes contemplation in another direction in her show "Vibrant Traces," leading viewers gently to the beating heart of Nature to help us realize what we are at risk of throwing away. One of her guides on this voyage is chance master John Cage, and Walsh has devised several creative ways to include chance operations in her work. One involves allowing a wave to literally crash over her drawing thus capturing a moment of time from Nature's tick, tick, ticking clock. August 10-September 15

Related Coming Soon to the DENIZEN: "A Picture Paints a Thousand Words" and "Meek"

Coming Soon to the DENIZEN: "A Picture Paints a Thousand Words" and "Meek"
As the Denizen theatre celebrates closing night of their run of “White Rabbit Red Rabbit”— a show that celebrates the connections between actor, audience, and (absent) writer— they’re showcasing local visual artists and local non-profit Wild Earth Sunday in exhibition inspired by the show.
By Denizen Theatre
Theater

What do fireflies, airplanes, and walking the shores of the Hudson have in common? Another question: How can photographing in the dark reveal the interconnections between seemingly disparate phenomena? You may ask yourself similar questions while traversing a path around the walls of the Kleinert/James Center taking in the wonderous timelapse photographs of Pete Mauney. Or then again maybe you won’t. Which would be fine with the photographer, who evidently has lots of thoughts about bioluminence for example and “the pursuit of randomness generated by highly programmed and engineered entities,” but would prefer to just take in the wonder of the thing in itself. You know, walking along a road on a clear and mild summer evening, then suddenly seeing the fireflies dance in a field; moments Mauney’s painstakingly captured trails of light transmit perfectly. Through September 8

The Wassaic Project’s annual summer show is a perennial must-see for those wanting to take the pulse of emerging contemporary art. It’s well worth the climb upstairs to the multiple exhibit floors featuring works by nearly 70 artists. This year’s theme translates to: “through hardships to the stars.” And while the very top floor delivers not celestial visions per se but lovely faux pigeons made and arranged with great care by artist Susan Hamburger, the urban birds in combination with the idyllic landscape viewable through the room’s elevated windows engender a welcome moment or two of inexplicable peace. Other delights include an alternative lifestyle barbershop installation by Ace Lehner and a neon piece by Annesta Le, which mercifully delivers a non-confrontational and elegant abstract message. Whatever your proclivities, you will find several works that will invite you to pause, look, and contemplate. Through September 21 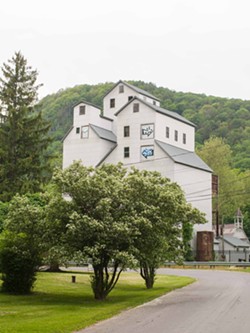 Painting Peace: Art in the Time of Global Crisis at Zen Mountain Monastery

Kazuaki Tanahashi visits Zen Mountain Monastery to read from his latest book Painting Peace and speak about his career as an artist, peace activist, and leading translator of Zen Master Dogen (one of the founders of the Soto Zen school). He shares about his childhood in war-torn Japan and the influence of his father, an important figure in the Japanese military who later became a Shinto priest and dedicated his life to the cause of world peace. August 8 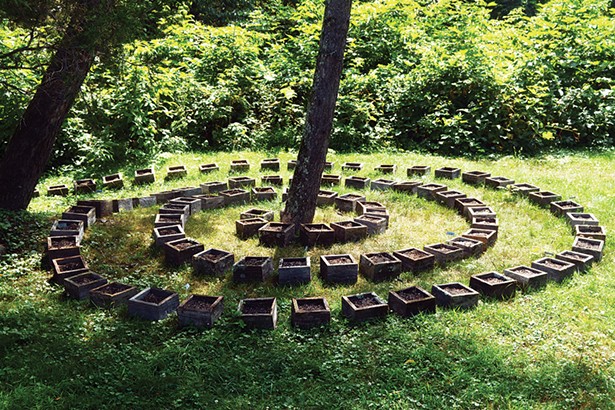 In the past, we tended to think of art as permanent, and traditionally, works have been made to stand the test of time. Things have changed—at least, that is the view of curators Linda Weintraub and Michael Asbill and the bevy of artists they have assembled for this outdoor show. According to the curators: “This exhibition invites artists to challenge the widespread social, personal, and economic desire for material stability.” In other words: Hey artists, stop using toxic stuff to make your art, and art lovers, get used to the fact that, in the words of Jimi Hendrix, “castles made of sand fall into the sea eventually.” In case you might think this is all pretty grim, think again. Adaptation can be fun. In that vein, a feature of this show is a kind of 3D, time-based version of the famous surrealist technique exquisite corpse, where several artists work together in sequence to create one drawing. At Unison, 12 artists over 12 months will use the same site to compose, decompose, and recompose one evolving work. Perhaps we can think of this as one long, selfless gesture pointing the way to the future. So, why not give it a try: take a walk in the fields and forests of impermanence at Unison, you may enjoy the change. Through July 21, 2020

The Maria memorialized by The Shroud of Maria is more of a machine than a person, and any religious allusion is cloaked in good-humored irony. An artifact of an evolving and often hilarious conceptual project by California artist Bruce Tomb (silent "b"), the shroud is a lovingly rendered record of drill holes made in the hood of a 1959 Chevy El Camino, depicting (when backlit) a female robot from Fritz Lange's Metropolis. The hood in question remains attached to the fulsome Chevy, which is itself mounted to a hydraulic-tracked excavator resulting in a vehicle whose velocity tops out at two miles per hour. Making up for it's turtle-esque land coverage, the Maria del Camino moves at warp speed through a constellation of engaging concepts. Fittingly, the vehicle itself, which sports a vanity licence plate proclaiming LIMINAL, is not physically present in Gardiner. But the shroud is meticulously displayed along with a road map of documents in a truly beautiful "cappella" designed and built by noted architect Mathew Bialeki who also happens to be one of this delightful project's patrons. Through August 23 (by appointment)

Sculptor, printmaker, draftsman, and professor Ed Smith is a storyteller. In his exhibition of new bronze sculptures and drawings at BCB, Smith plumbs the depths of Homer's Iliad to reveal lasting verities about the nature of human struggle. His is an iterative process of countless drawings, wax models, and small bronze studies, in the search of the final form of his emotive figurative sculptures. His credo is "ideas spring from labor." His figuration is reductive, letting fragments of the body, which bear the marks of the artist's fingers, tell the tale. "Nothing's new," Smith says. "Mythic concepts are still active in modern life." There's not the slightest whiff of irony in that statement. Ed's on a quest with his work—one of heroic ambition. Crazy? Perhaps. But he's got the chops to back it up. The Greeks gave us democracy, Ed wants to know if we'll be valiant enough to protect it. Through August 24