10 Art Exhibits to Scope out in March 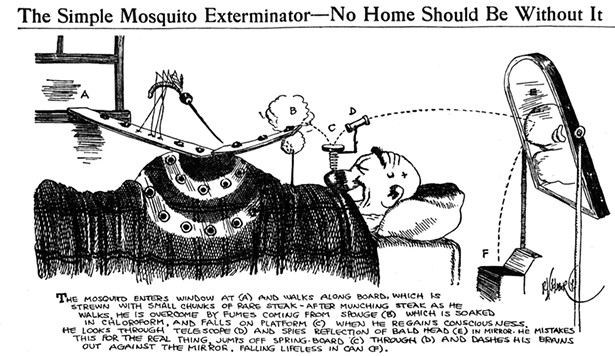 From the machinations of Rube Goldberg to Tom Slaughter’s “Icon Alphabet” to Boogie Rez’ lively fusion of high art and hip-hop, there is a lot to see this March in the Hudson Valley. Here are 10 exhibits to check out.

Goldberg (1883-1970), best known for his drawings of complicated gadgets performing simple tasks in convoluted ways, gets a retrospective at the Rockwell Museum that opens this month. "The Art and Wit of Rube Goldberg" offers a revealing look at Goldberg's creativity through original comic strips from the 1930s, as well as World War II-era political cartoons and instructional materials from the Famous Artists School, which are now part of the permanent collection of the Rockwell Museum. March 2-June 9.

Barrett's annual photography show is in its 32nd incarnation, juried this year by James A. Ganz, senior curator of photography at the Getty Museum. The exhibition includes artworks by photographers from the US and Italy, including several Hudson Valley artists: Poughkeepsie photographers Roberto Hull and Trevor Messersmith, Tad Philipp of Hyde Park, Susan Copich of Hillsdale, and Nancy Faulds of Putnam Valley. Through March 23.

Featuring 31 books, all first editions or advance copies by African-American authors spanning more than 170 years, "Black Lit: The African-American Narrative" is drawn from the private collection of Marist alum Alvin Patrick and is exhibited in the James A. Cannavino Library's North Reading Room. The exhibit spans mid-nineteenth century slave narratives, the artistic heights of the Harlem Renaissance, and 21st-century essays on racism in the United States. Through March 31.

"Where is the Madness You Promised Me" at HVMoCA

At Mt. St. Mary College in Newburgh, "Explorations in Form," a two-person show with painter Erica Hauser and sculptor Sienna Martz. Hauser's photorealistic worked has wowed us in the past, and her work was featured on the cover of Chronogram in 2012. Her latest paintings are colorful, abstract blobs, like a 2-D version of a lava lamp. Martz, a sculptor who often works in fabric, was chosen recently for our "Emerging Artists to Watch Out For" feature. Through May 22

Composition in the Round by Marilyn Reynolds

Housed in the old Stone Ridge Firehouse just off Route 209 in the village, Marilyn Reynold's massive painting Composition in the Round (1983) encircles the room. A mixed-media work, its 100' long and 8' high. Installed in the firehouse last year, the kaleidoscopic work demands to be reckoned with once the viewer steeps into the room . A self-described intuitive painter, the canvas reflects the preoccupations of Reynolds in a dreamlike fashion, from disturbing gun violence to heroic eagles in flight. Open by appointment: Marilynreynoldsartist.com. Ongoing.

"Icon Alphabet" celebrates the joyful imagery of Tom Slaughter (1955-2014), best known for his bold and vibrant paintings and prints, and represents a fascinating hybrid of fine art and commercial design. This exhibit brings together the varied work—paintings, prints, wallpaper, and billboards—that made Slaughter's minimalist style so recognizable. The exhibit, the first since his death, is designed by his daughters Hannah and Nell Jocelyn and son-in-law Jim Mezei. Through March 31.

Emily Cole (1843-1913) was the daughter of Hudson River School founder Thomas Cole. This project marks the first solo exhibition of Emily's artwork on both paper and porcelain, revealing her exquisitely painted botanicals. A contemporary newspaper review of an exhibition of Emily's porcelain calls her work "unrivalled" for its "delicacy, purity of color, and transparency." The exhibition— featuring 12 original sets of painted porcelain works c. 1900-1910, and 13 works on paper c. 1870-1880s—will be presented in the 1815 Main House, where both Thomas and Emily Cole lived and worked in Catskill. March 2-July 7.