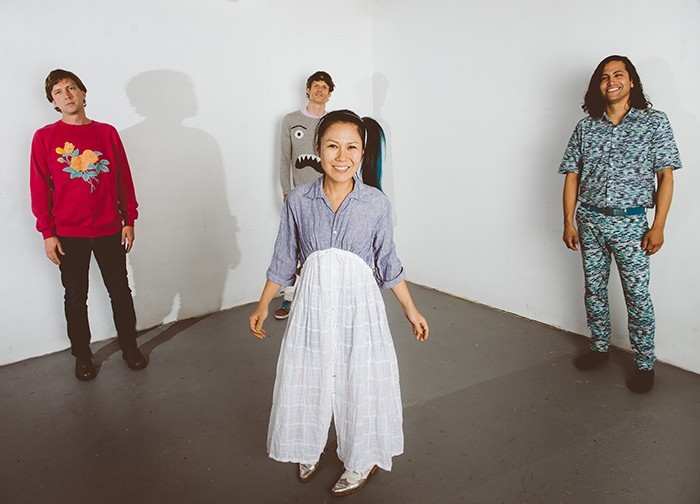 The phenomenal 0+ Festival of music, art, and wellbeing returns to Kingston on October 6, 7, and 8. For the Forecast section of next month’s issue, I wrote a preview piece about the festival that includes a Q&A with headliners Spirit Family Reunion. Among the other top acts at this year’s 0+ are Amanda Palmer, Steve Gunn, and San Francisco-born indie/art rockers Deerhoof, whose drummer, Greg Saunier, answered a few questions for us below via e-mail. For a full festival lineup and other information, visit http://opositivefestival.org/.

Were you and the other members of Deerhoof familiar with 0+ before the band was booked for at the festival?

None of us had ever heard of 0+ [before being asked to perform]. Our first second and third impressions when we got the invitation were, “What a spectacular idea!”

What was it about the 0+ mission/concept itself that attracted you?

Even if you don’t count the horrific state of the American health insurance “debate” that gets playacted in the news by insurance corporations, drug companies, and their lawmaker stooges in both parties, the word “healthcare” when it comes up even in casual conversation, conjures images of stressful doctors’ offices, overeager opioid prescriptions, and the dreary, squalid convalescence of the sick, injured, and aging. Why should it be that? Health and care should both be causes for celebration. The secret methods of achieving them are win-win, and should be heralded from the mountaintops: exercise, good diet, hygiene, and generally taking care of yourself and your loved ones make life worth living. You’re stronger and your breath is minty-fresh. It’s just that there’s no profit in either health or care, only in their absence, so the corporate-sponsored, neoliberal ideology we’re forced to endure 24/7 demotes these values down to somewhere below the first lady’s shoes or the latest episode of “Game of Thrones.”

Deerhoof is a band that has been known to touch on political and social topics in its music (perhaps most notably on 2003’s Apple O’), but your new album, Mountains Move, was made in the immediate aftermath of the 2016 presidential election and addresses the trauma so many of us have felt in the wake of Trump’s ascendance. Months later, how do you feel now about the songs on Mountains Move when you listen back to the recordings now and when you play the songs live? Bleaker, more optimistic, or the same? Why?

We’re in no position to be bleak. We are not among the hardest hit. Most of the factors causing real trauma were already well underway before Election Day and would still be so, regardless of the election’s outcome. [The album’s title track] “Mountain Moves” is meant to combine optimism and gratitude. Either we’re going to gather the strength to make our way out from under the thumb of the rich and powerful, or we’re all going to die and it’s time to get our affairs in order and appreciate the time we’ve enjoyed while living on Earth.

Mountains Move is part of a massive, overarching 2017 artist-in-residence project Deerhoof undertook with the band’s label, Joyous Noise, which assigns you the task of producing “an estimated 160 minutes of music” that includes five (!) albums along with “various collaborations and surprises.” Obviously, Mountains Move is out now and you’re touring on that album, but how is the rest of the residency going? What happens next? Do you have a release date for the next album(s)? Are you going insane yet?

Far from it. You can’t imagine what a privilege it was to be asked to do this. And it’s more involved than you think. Four of those five LPs are split LPs, with different bands on side A and side B. There’s also a full-length cassette tape and a seven-inch single. In all, it’s 11 different projects. Because of Joyful Noise’s concept that it be a subscription, with limited copies, the pressures are different than if we were simply making a Deerhoof record, where the goal is to make a big promo splash, or risk nobody buying it or even knowing it exists, in which case no one knows you’re on tour and you play to empty rooms. So you think a lot about which song should be the single and what blurb to send to what website. With the music in the box set, we were focused only on making something for long-term use. In other words, making music that people will like to listen to again and again. It has been an honor. The music from the final two LPs is being finished right now. All the music also has a digital version anyone can get online.

Mountains Move features several guest collaborators, such as Stereolab’s Laetitia Sadier, who performed in Kingston last August. Do you plan to have any guests for the 0+ set? What do you most hope people will feel or experience when they see you perform?

I don’t think we’ll have any guests. Because we record our records ourselves, DIY-style, and we rarely have any time limit, we sometimes tend to stuff them with all kinds of instruments we don’t actually have in the band, and create bizarre mixes that would be impossible to recreate live. And on this record, as you say, we also have a whole bunch of guests from all over the place. But when we hit the road we become like a Deerhoof cover band. We reinvent the songs as totally stripped-down guitar rock. It’s fun!