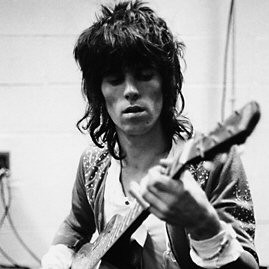 Celebrity charity auctions in New York or London are common, but it’s not often that rock royalty gives up the goods—for a good cause—in the Hudson Valley. Later this month, though, you’ll have the opportunity to take home an antique or two from the collection of Rolling Stones guitar god Keith Richards—provided, of course, you got the silver, to borrow a line from one of his signature tunes.

To benefit the Connecticut autism charity groups SPHERE and Prospector Theater, on June 24 the guitarist and his wife, model Patti Hansen, will put high-end items from their luxury Manhattan apartment on the block at Stair Galleries. There’s no word at this time as to whether or not the couple themselves will be on hand physically for the auction (one guesses not), but of course having the chance to appreciate firsthand some choice pieces from their legendarily tasteful collection will be a kick for Stones fans—even the ones who aren’t planning to bid on them.

Here’s Keef and the boys with the aforementioned ditty:

For more information about the auction, and a glimpse at some of the pieces being offered, visit http://www.stairgalleries.com/auctions/june-24-2017-2/.