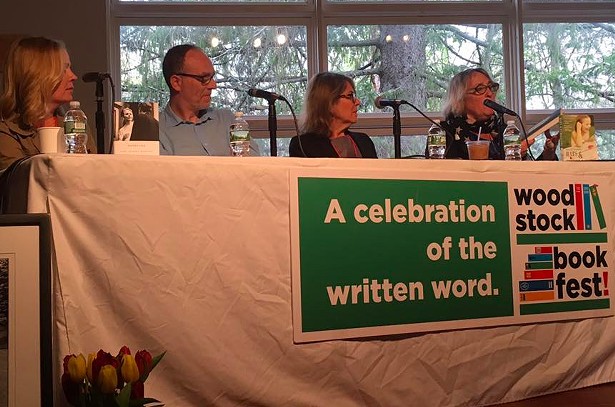 I walked into the Woodstock Bookfest (formerly the Woodstock Writers Festival) on Saturday, having no idea what the schedule was. The next panel discussion began, and I noticed: "I know both these writers!" The authors being Jonathan Gould, who wrote a fabulous book about The Beatles, Can't Buy Me Love, and Tony Fletcher, who penned an essential history of The Smiths, A Light That Never Goes Out. This year these local biographers each written books about major soul singers. Tony's is In the Midnight Hour: The Life & Soul of Wilson Pickett. Jonathan's is Otis Redding: An Unfinished Life. Jimmy Buff, the WDST radio personality, interviewed them. Here are some of the notes I took:

Otis Redding and Wilson Pickett had similar beginnings. Both were born in the South, to sharecropper parents. Both first sang in the church. And of course, both eventually left Gospel music. The era of soul music was relatively brief: it lasted about a decade, from 1961 to the early 70s. Disco destroyed the careers of just about all the soul singers.

Otis wrote "Respect," but as he said at the Monterey Pop concert – perhaps his greatest single performance – "A girl stole this song from me." Aretha came up with the idea of spelling out "respect," which transformed the song. That was 1967.

Otis played the Fillmore West several times, and Janis Joplin would sit in the very first row. Sam Andrew, the guitarist for Big Brother & the Holding Company, said that Janis wanted to be Otis.

In the summer of 1967, Otis became obsessed with the Beatles Sgt. Pepper album. "This is bad!" he told his wife (which was slang for "very good"). While contemplating The Beatles, Otis wrote "(Sittin' On) The Dock of the Bay," which incorporated the sounds of surf and seagulls, in emulation of the sound effects on Sgt. Pepper. Most of the time black music influenced white music, but sometimes it was the other way around.

In 1969, a very young Duane Allman (most likely) convinced Wilson to record "Hey Jude," which ends with a duet of Duane on guitar and Wilson soul-shouting. This pop song invented the entire genre of Southern Rock, according to certain esteemed musicologists.