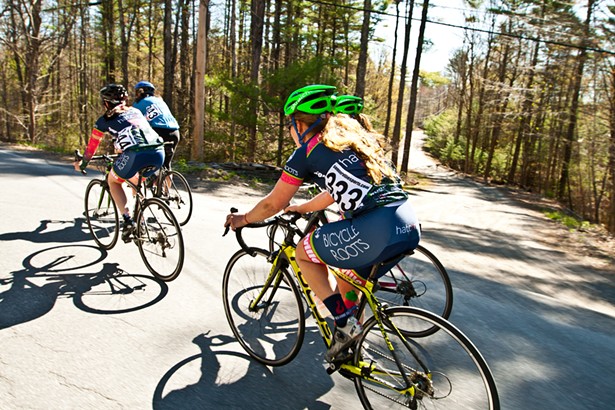 On Saturday, May 6th, professional and amateur cyclists will line Rock City Road in Woodstock, as they await the starting shot of the annual 35-62-mile race, depending on category. And all of them will be women. The Women’s Woodstock Cycling Grand Prix (WWCGP) is celebrating its fifth year as the only women’s single day, out-and-back road race course in the United States. Winding its way through the best roads in Woodstock, Phoenicia, Hurley, and Saugerties, the WWCGP course includes scaling Overlook Mountain for two miles at an average seven percent grade. It ends again at Rock City Road, with an awards ceremony and BBQ at the Woodstock Community Center. It’s a great day for families to support local athletes, inspire young ones, and enjoy community.

The WWCGP is a USA Cycling sanctioned race designed with Pro, Elite, and first-time athletes all in mind. It celebrates female cyclists, who can be overlooked in the sport. “Over the four-year history of the WWCGP, we have had participants who have gone on to win medals at the Olympics, National Championships, and World Championships,” says race organizer Martin Bruhn. “Racers who attended as Category 4 years ago are now regular podium finishers in both road racing as well as cyclo-cross events.”

There are a few choice spots to watch the race and cheer on the cyclists. At the top of Meads Mountain Road in Woodstock, there’s a Tibetan monastery and the trail head for Overlook Mountain. At the intersection of Route 212 and Blue Mountain Road, there’s the Centerville firehouse. Use GPS to find Stoll Road for a stunning view that’s new to the race this year. In Phoenicia on Main Street, there’s a race within the race with a sprint prize.

At the community BBQ, there will be a band and food from local restaurants. A dedication ceremony will honor the memory of three committed advocates of the sport: Woodstock’s Town Supervisor Jeremy Wilbur, a champion of the race, passed away on New Year’s Day after a battle with cancer; Colorado’s Susie Diller was staff at USA Cycling for 13 years; and Ellen Watters was a rising star in Canadian cycling who traveled from Ottawa with friends every year to support the race, but was hit by a car from behind while riding one day last December and died. That got the race organizers even more committed to their focus on bicycling safety, and they have taken an active role in campaigning for a three-foot passing law in New York State, which would specify a minimum safe distance cars should maintain when passing cyclists.

The Women’s Woodstock Cycling Grand Prix on Rock City Road in Woodstock: Saturday, May 6th, 2017; race starts at 8am, family-friendly, community BBQ starts around 11am at the Woodstock Community Center on Rock City Road; free to watch. For more information, contact Martin Bruhn, Race Director via email at wwgcp2014@gmail.com or by phone at (845) 612-1672.