The Mammals Play in Garrison on Saturday | Daily Dose

The Mammals Play in Garrison on Saturday 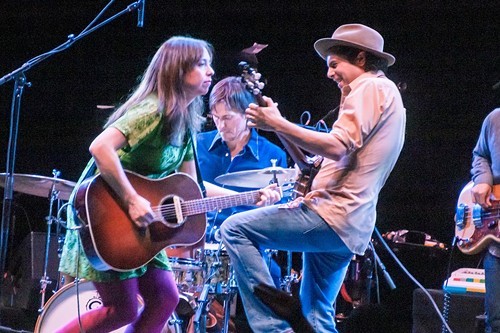 This is the week for new local tuneage at the Daily Dose. On Tuesday, we marked the unveiling of a new track by local jazzman Roswell Rudd, and today brings “Culture War,” the latest single by reunited folk rock greats the Mammals, who will perform at the Philipstown Depot Theater this Saturday.

The alma mater of the beloved Woodstock-area duo Mike & Ruthy AKA Michael Merenda and Ruth Ungar, the Mammals are well known for their topical songs, and “Culture War” continues the tradition—a tradition greatly informed by protest folk heroes Woody Guthrie, Utah Philips, and, most directly, the group’s mentor Pete Seeger (the late legend’s grandson, Tao Rodriguez-Seeger, is an erstwhile Mammal). “Culture War” was composed by Merenda, who says the group is working on a new album for 2018, calls the song “an earnest wake-up call but with a distinctly triumphant energy.” The tune also features Sarah Lee Guthrie, Woody's granddaughter, on harmony vocals.

Take a listen and read the lyrics here:

The Mammals will perform at the Philipstown Depot Theater in Garrison, New York, on April 8 at 7pm; a harmony-singing workshop will be held at 4pm. Concert tickets are $25; workshop tickets are $20. For more information, call (845) 424-3900 or visit http://www.philipstowndepottheatre.org/.