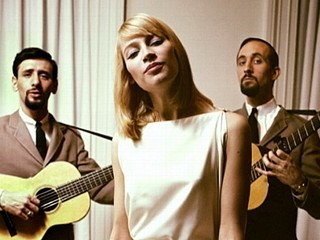 Peter, Paul and Mary are mainly identified with the Greenwich Village folk scene of the early 1960s, but the trio has strong connections to our region as well. Besides having massive hits with their versions of tunes by famous locals Bob Dylan (“Blowin’ in the Wind,” “Too Much of Nothing”) and Pete Seeger (“If I Had a Hammer”), the three were managed by Bearsville music magnate Albert Grossman; member Peter Yarrow spent much of his childhood at his mother’s Woodstock cabin. A newly released DVD, 50 Years with Peter, Paul and Mary, explores the beloved threesome’s history and includes rare and previously unseen footage.

First aired on PBS, 50 Years with Peter, Paul and Mary was produced by four-time Emmy Award-winning director Jim Brown and follows the group from the hub of the folk revival in New York through the civil rights and antiwar era of the 1960s, their later advocacy and music, singer Mary Travers’s moving memorial, and finally to the present, where their legacy continues to inform and inspire.

Check out this brief trailer:

50 Years with Peter, Paul and Mary is out now on MVD Visual. For more information, visit www.peterpaulandmary.com.