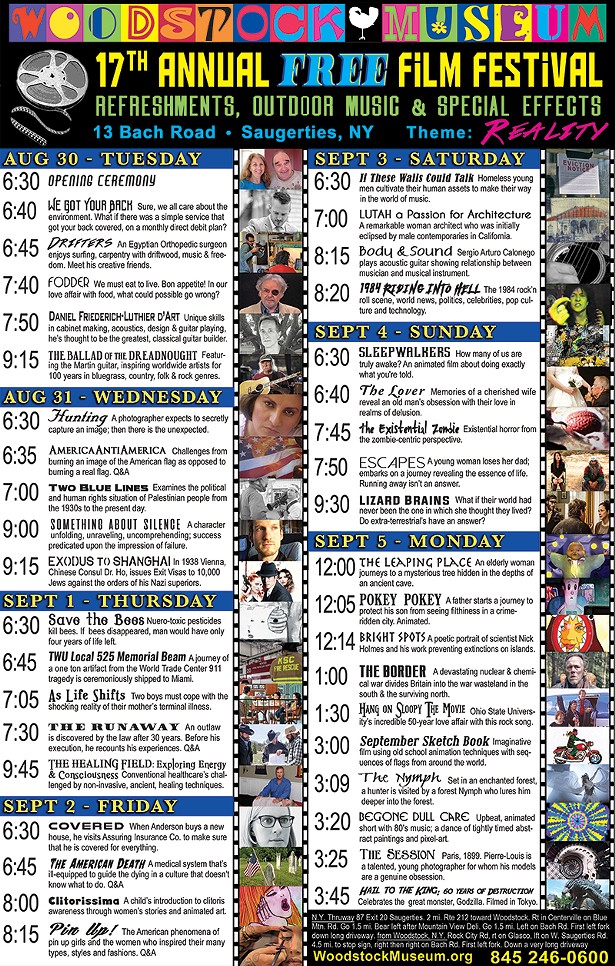 While many are familiar with the Woodstock Film Festival, unbeknownst to some there is another local annual cinematic event: Woodstock Museum’s Free Film Festival.

Now in its 17th year, the Saugerties festival showcases films centered on a certain topic. This year, the theme is reality. Over thirty independent films will be screened including documentaries, dramas, and animations, spanning two theaters.

With a subjective theme like reality, the films displayed vary in severity and plot. While specific highlights are subjective to individual preference, with five films Wednesday to Sunday and even more on Monday, there are plenty of options to choose from.

Wednesday’s short AmericaAntiAmerica explores challenges that arise from burning a picture of the American flag as opposed to a real one.

Some films lean towards heavier subjects, exploring realities unfamiliar to most. Like Thursday’s The Runaway, which depicts an outlaw of thirty years recounting his experience before an execution.

And of course, the animated films get a creative with their plots: Clitorissima shows a child’s introduction to the clitoris through animated art.

80’s fanatics won’t want to miss Saturday’s 1984 Riding Into Hell, a documentary about the big-hair rock-n-roll scene, politics, celebrities of the times, pop culture, and more about the iconic 1984.

On Sunday, the animated film Sleepwalkers questions whether or not we’re truly awake, or just doing everything we’re told. Also on Sunday is The Existential Zombie, a zombie-apocalyptic thriller told from the zombies’ perspectives.

Labor Day offers ten screenings beginning at 12pm with The Learning Place, which follows an elderly woman on her journey to an elusive tree in an ancient cave. Hail To The King: 60 Years of Destructions, a Tokyo Godzilla flick, concludes the festival at 3:45pm.

Woodstock Museum Free Film Festival runs through Monday, September 5 at the Woodstock Museum in Saugerties. In addition to the films, live music will take place outside and refreshments will be served. The museum will be open regular hours—from noon to 4pm—for guided tours. While admission to the festival is free, donations are welcomed. For more information visit WoodstockMuseum.org or call 246-0600.

The Runaway (Official Trailer) from Benetone Films on Vimeo.