A Graphic Novel by Matt Maley 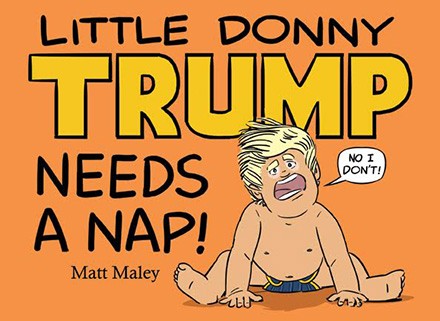 Hudson Valley artist and writer Matt Maley alludes to why Trump is such a grump. Maley’s Little Donny Trump will have you wondering if our republican candidate still needs a nice, long nap. Because he’s clearly too busy telling people what he thinks.

The terror that is baby Donny Trump wreaks havoc—insulting his peers including Rosie O’Donnel, Barrack Obama, and Hillary Clinton and others. He threatens to ban a Muslim girl. Tells the president of Mexico Enrique Peña Nieto, “I’m building this wall and you’re paying for it.” Additionally, he insults everyone who disagrees with him. He also makes a big “boom boom.”

Considering the graphic novel is fueled by direct Trump quotes deconstructed into child's storyline. The only difference between the baby tyrant and Trump is that little Donny’s got more than just a few wisps of hair on his head.