My Daughter, My Teacher, My Healer | Daily Dose

My Daughter, My Teacher, My Healer 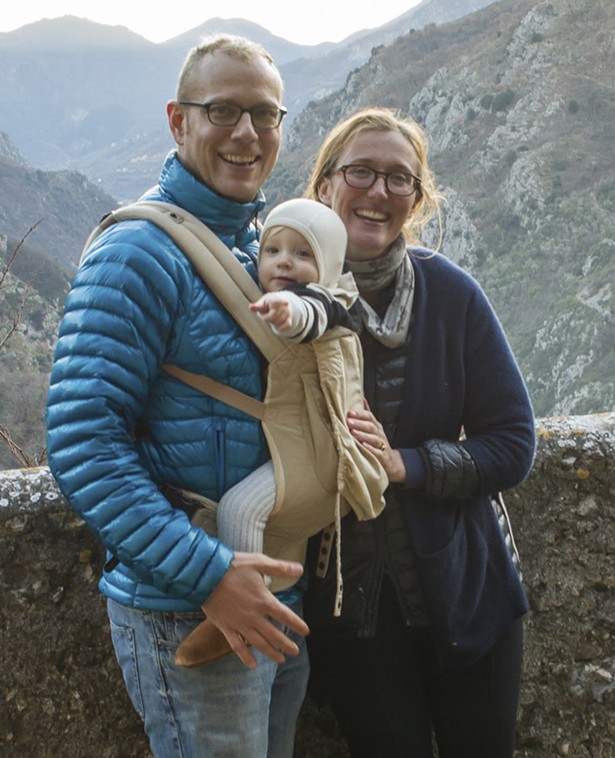 Rivers flow downstream. But when I looked out the window from my bed in the Intensive Care Unit at Memorial Sloan Kettering hospital, I saw the East River making its way uptown. I could feel my heart being swept up in that perverse and dark current—moving in the utterly wrong direction.

The East River is in fact a tidal estuary, but I had forgotten that. To me, its backward motion seemed just another part of the world being upside-down. It was August 2013, I was coughing up blood, and my torso was filled with the bloom of recently diagnosed cancer.

My fiancee and I would endure a year of chemotherapy, four major surgeries, nights filled with sleeplessness and tears, and paralyzing fear. That same year we’d feel the embrace of a loving community, and an untold amount of grace. The year I brushed up against death ended with feeling the warmth of my newborn daughter in my arms—she would heal me and teach me. And I would do it all again.

At the beginning of winter and towards the end of my chemo— with the outcome of treatment uncertain—we decided, against the advice of many, to try to have a child. We hesitated when we imagined life if my condition worsened with a child on the way. But we both felt the need to simply say “yes” to life, to our future, and to bring more light into the darkening days.

Because the chemo and surgery I would undergo can permanently compromise fertility, we had hurriedly banked two vials of sperm before treatment. With this small stockpile we started In Vitro Fertilization (IVF). Now we both had something wholly positive to focus on as we navigated a world of sterilized instruments, IVs and embarrassingly open-backed smocks.

The first IVF attempt failed and it was devastating. The ember we had lightly breathed upon had gone out, the darkness had taken back some ground. We felt we only had one more chance to get everything right.

My fiancee, who was not only taking care of me and enduring the fertility treatments but also working full time as a teacher, picked herself up—picked us both up—and led the charge back into the IVF fray. I remember, at 40 pounds lighter than usual, lying in bed at Sloan Kettering with a collapsed lung and recovering from an emergency abdominal surgery. With tubes in just about every place they can go, I would reach out of bed and inject my fiancee’s backside with hormones. We would laugh when the nurses came in and wondered just what was going on here.

In the early Spring, a single viable embryo emerged. We both cried and held hands, watching the black-and-white monitor as our doctor placed that tiny hope in the uterine wall.

As my cancer shrank, that embryo grew. Between lung surgeries, we got married. And just a few months after my last treatment, our daughter was born.

When I held her for the first time I felt like the shipwrecked man who collapses dripping on the beach—ragged, thirsty, exhausted, but now suddenly on terra firma.

Her arrival felt like an important part of my healing. My disease was a type of testicular cancer called choriocarcinoma which meant the tumor tissue itself was essentially placental tissue. So I was partially pregnant, in a way—in a very wrong and dangerous way. In many medical traditions, health is considered balance and disease an expression of imbalance. The “right” pregnancy of my daughter was the turning of the tide, the return of balance and the final antidote to the “wrong” pregnancy that had spread like a flame through my body.

This past March, during an event for Cycle for Survival, the national movement to beat rare cancers, I stood at a podium flooded with gratitude and a sense of safety, with my oncologist and a fellow testicular cancer survivor, holding my daughter and looking over at my hero of a wife... who is pregnant again (the old fashioned way—which was quite the surprise).

My daughter has not only been a healing force for me but a teacher. It is no wonder that people gather around babies the way they do around fires—staring, telling stories, and unusually comfortable with long stretches of silence.

Fatherhood has helped me to understand time in new ways. My daughter has drawn me deeper into the practice of mindfulness because an infant comes into the world with no language and no sense of past or future. If you want to spend time with them you must meet them in the very present and precious moment.

My entire life I have carried the abstract image of floating down a stream of existence with my parents behind me, their parents behind them, and so on—an endless ancestral precedence. Now, for the first time, I see someone downstream. I am at once relieved to no longer feel the froth of the front line, and imbued with a sense of responsibility for what lies ahead.

To me, this is the essence of fatherhood. It is the stewardship and contribution to all that lies in front of us: not just our children but the works we create, the students we teach, the land and creatures we protect, our impact on everyone around us, the songs we sing, the love we live—everything we touch. It is all connected, and our choices will ripple, however subtly, through the ages.

Just as the East River sometimes flows north, our children can be healers, guides and teachers—even in their simple newborn presence. And on this day I celebrate fathers of all kinds, including the ones who have come before us who have guided, loved, inspired, nurtured, and protected us. We now have the opportunity to do the same for those downstream.

Jay Erickson is a cancer survivor, musician, poet, entrepreneur, beekeeper, carpenter, wanderer and gardener. He lives in Pawling, NY with his wife and daughter.