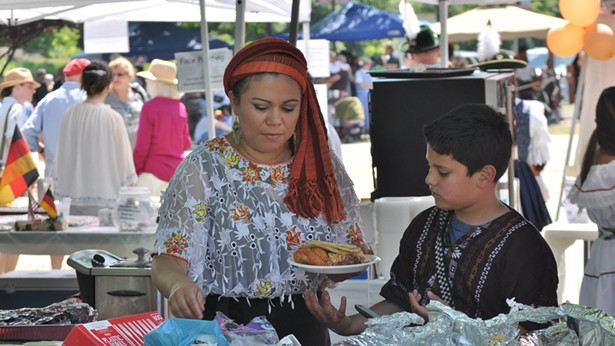 What do the Jewish Federation of Ulster County, Latino Committee of Kingston, the Ulster County Italian American Foundation, and the New Progressive Baptist Church all have in common? They, along with others, will all be participating at the Kingston Multicultural Festival, Sunday June 5th, at Gallo Park on Kingston’s waterfront. With children’s activities, crafts, traditional foods, and performances all geared towards sharing culture and community, the festival is a celebration of Kingston’s rich multicultural heritage.

It’s hosted by the Reher Center for Immigrant Culture and History, which is located in a time capsule of a building at the corner of Broadway and Spring Street on the Rondout. An old bakery operated there for almost 80 years until it closed in the 1970s. When the Jewish Federation of Ulster County was deeded the building in 2004 for renovation and development as a historical center, there were still old newspapers, antique bakery instruments, and other evidence of all the neighborhood and family history that happened there.

At first the idea was to share the Jewish culture of the Rehers, the family who owned and operated the bakery, and that is still the impression many have of the Reher Center’s mission today. “But in taking a look at how we wanted to develop it,” Reher Center Chairman Geoff Miller says, “we saw that to make proper use of the building’s potential, that was too narrow a concept.” Instead, the Reher Center has been working to memorialize the universal immigrant experience and focus on how the city of Kingston, and especially the Rondout neighborhood, have evolved to meet the needs of its families. In collaboration with ASK Art next door, the Reher Center has just completed a six-part series of art exhibitions, film screenings, and events on immigrant culture in Kingston. At this fourth annual Multicultural Festival, communities share the history of their culture by sharing its living aspects with the next generation. With a lineup of Native American and African drumming, Ukrainian, Irish step, and classical Indian dancing, and games and tastes from around the world, families can experience a wealth of cultures.

“There’s a common narrative that is important for everyone to see,” says Miller. “Though some of us can trace our roots back hundreds of years, and some only as far back as yesterday, none of us had it easy finding a place for ourselves in the already existing larger community -- and we all have a story to tell.” The Reher Center is building a greater understanding and appreciation of the many rich and distinct cultures that make up the Kingston and Ulster County communities.

Bring blankets or folding chairs. Seating is informal. Additional parking is available behind the police station on the northeast corner of Broadway and Garraghan Drive. In the event of rain, the family-friendly event will be held at the Andy Murphy Midtown Neighborhood Center, on Broadway at the corner of Hoffman Street in midtown Kingston.