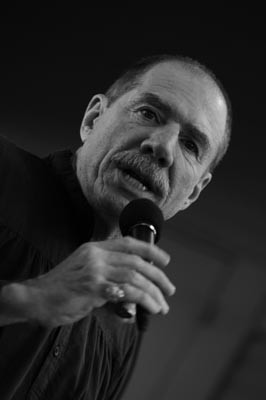 Giacomo Gates is one of the best old-school male jazz singers working today. One who’s as influenced by instrumentalists as he is other vocalists, and brings the bebop scat and vocalese with adventure, innovation, and miles of finesse. This month, Gates brings his sublime, smoky-but-bell-clear voice to our region via a night at the Beanrunner Cafe.

The winner of the 2012 Downbeat award for Rising Star Male Vocalist, Gates has released seven albums as a leader to date. It was 1998’s Fly Right (Sharp Nine Records) really put him on the map, but he’s really hit his stride with his last three: 2011’s The Revolution Will Be Jazz: the Songs of Gil Scott-Heron, 2013’s Miles Davis tribute Miles Tones, and this year’s Everything is Cool (all Savant Records).

Giacomo Gates will perform at the Beanrunner Cafe in Peekskill, New York, on December 11 at 8pm. Tickets are $10. For more information, call (914) 737-1701 or visit http://beanrunnercafe.com/index.php.