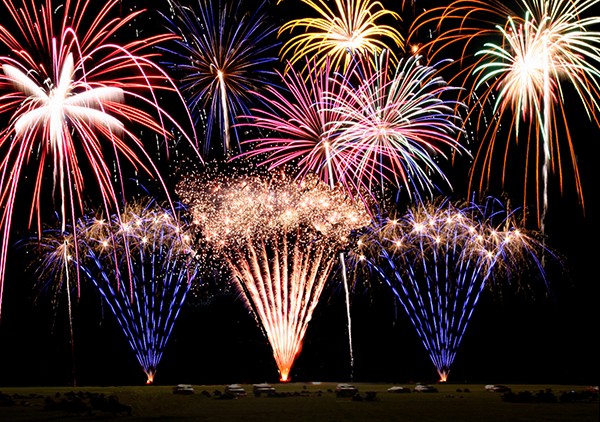 Commemorate the signing of the Declaration of Independence in every nook and cranny of the Hudson Valley. Exercise your right to a low-key stroll on the heels of a local parade, to enjoy sprightly live music, to eat delectable local dishes, and, of course, to gawk as sparks mingle with stars in the night sky. All ages, abilities, and interests will be charmed by the efforts of local towns to sustain a close-knit community vibe in this historic region. We hold these truths to be self-evident, that all events have been created equal, that they are endowed by their creators with certain unalienable rights, that among these are life, liberty, and the pursuit of the loudest fireworks.

Here are some events to plan your weekend around:

The 4th of July Extravaganza at the annual Woodstock Farm Festival promotes farming and local produce while entertaining the kids with a marching band, face painting, crafts, and music on the main stage at 5pm.

Fireworks blast off at the Ulster County Fairgrounds in New Paltz on Libertyville Road at dusk after the kids have scrambled over the free bouncy houses. Food vendors appear at 5pm and music starts at 7pm.

Accord Speedway hosts a fundraiser and raffle for Sparrow's Nest, a non-profit Hudson Valley charity that provides meals to families whose caregiver is battling cancer, along with a fireworks extravaganza, chicken BBQ, dance party, and stock car racing. Admission for adults is $16; seniors are $14; and kids 11 and under are $1. There is a family four-pack for $45 that includes two adult admissions, two child admissions, and $20 of Accord Bucks to use at the Main Concession and Emma's Sweets and Treats.

The town of East Fishkill will host Adam and the Newhearts, performing rock and roll hits from the 50s and 60s, at Hopewell Recreation at 392 Route 376. The band will play from 7 to 9pm and there will be fireworks at 9:15pm. Admission is free.

At the Town Field from 6 to 10pm there will be live music with Touch of Rhythm and DJ Rick Knight, food vendors, bouncy houses and other kids' activities, and fireworks to bring the night to a close with a bang.

Town of Kent Fireworks Day commences at 11am at Kent Library with Super Heroes Training Camp for kids. Music at the Art Center begins at 5pm with local band Whiskey Neat playing an amalgamation of blues, folk, and punk. Summer Concert Series kicks off with Kati Mac and Southeast Station performing Americana folk, blues, and rock music at 7:30pm. Fireworks over Lake Carmel will end the concert at 9:15pm.

The annual fireworks display over the town of Wallkill Golf Course at 40 Sands Road in Middletown will launch at dusk; gates open at 6pm and buses begin at the same time from Circleville Elementary school to the golf course.

Memorial Park in Beacon hosts the annual 4th of July Celebration with live music, food vendors, kids' activities and more from 3pm to dusk. Local donations have made a free fireworks show possible.

Cornwall Town Hall grounds host a day full of family activities—including an Independence Day breakfast from 7 to 11am, a children's art show, a pie eating contest from 12 to 12:45pm, Sam the Magician, Macaroni the Clown, music, a parade at 5pm, a flag ceremony, and fireworks at 9:30pm to send everyone off to bed with their ears ringing.

Goshen honors Independence Day at the Historic Track from 10am to 5pm with a free museum, 150 craft vendors, an antique show, children's rides, road races, and amateur driving races.

Kingston's 4th of July celebration at the Rondout Waterfront features live music performances by Breakway, featuring Robin Baker, starting at 5pm and a fireworks display at 9:30pm. Shuttle buses pick up at Kingston Plaza and Cornell Street Parking lot and drop off at Abeel St and Broadway in the Roundout.

Fireworks launch at 9pm over the Newburgh skyline at the former Consolidated Inn site (adjacent to Gully's restaurant) following an afternoon of art and food vendors and music by Dr. Magneto at UNICO Park.

Walkway Over the Hudson opens to ticket holders only (adults $12.50/children under 5 free) at 6:30 pm at the east and west approaches—hunker down for the evening with picnic dinners, folding chairs, and anything else to entertain your family while you wait for fireworks to go off around 9pm.

Saugerties High School hosts the annual 4th of July parade at 10am, sponsored by the Saugerties Fire Department. Fireworks will follow the parade at dusk.