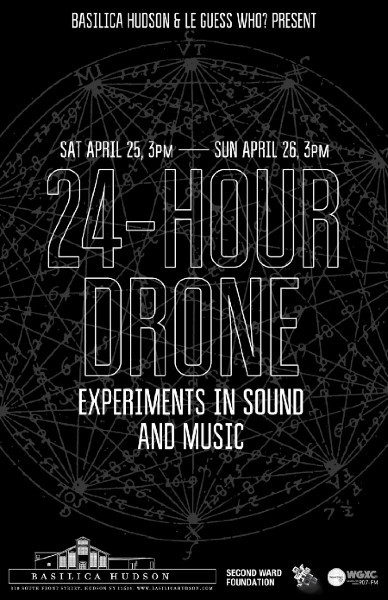 There’s certainly been a lot of negative talk in the news about drones over the last few years. But we’re here today to talk about another, less, controversial kind of drone: the sustained, humming sound that occurs in nature and has been replicated by man since time immemorial for its mysterious, hypnotic, and meditative qualities. And it’s that definition of the word that’s the focus of the US inaugural 24-Hour Drone festival, which will run this Saturday and Sunday at Basilica Hudson and is being co-presented with Holland’s Le Guess Who? festival.

Subtitled “Experiments in Sound and Music” and promising “a full 24 hours of low-frequency fun,” the event will kick off Saturday afternoon and continue straight through until the following afternoon. Set in the round in Basilica’s cavernous main room, the program features musicians from the region and beyond experimenting in electronic, psychedelic, classical, non-Western, and instrumental drone music, with the continuous sonic torch being passed, uninterrupted, from one act to the next over the course of the cycle. Performers include Prurient, Bobby Previte, SUUNS, Greg Fox (Liturgy, Guardian Alien, Zs), Arone Dyer (Buke and Gace), Patrick Higgins (Zs), Alexander Turnquist, Brian Dewan, Randy Gibson, Eric Fraser, Ultraam, yours truly, and others. The event will be streamed at www.wgxc.org in its entirety, with selected hours broadcast on WGXC 90.7-FM in the upper Hudson Valley.