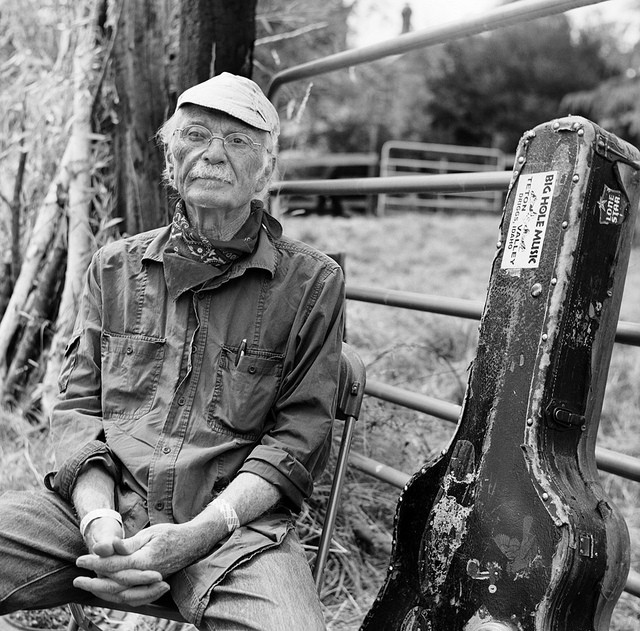 With the Martin and Eliza McCarthy gig I blogged about on Tuesday, and this one by Michael Hurley, April is shaping up to be a fine month for folk music. And if by “folk" you mean “self-made,” “naturally primitive,” and “traditional but original,” then Hurley is the last and most self-made, naturally primitive, and traditional-but-original folksinger still standing. Although, at his advanced age (74), he now, understandably, sometimes plays sitting down. No matter. Hurley is a national musical treasure, and you should never miss him play if you have the chance. And if you’re a Hudson Valley local your next chance is on April 19, when ol’ Snock will be backed by Elizabeth Mitchell and Dan Littleton at the Bearsville Theater.

Hurley grew up in Eastern Pennsylvania, where he absorbed the early rock ’n’ roll as it aired on 1950s radio and the blues and hillbilly music he heard on original 78s. By the early 1960s he was making the rounds on the Greenwich Village folk scene, from where several of his odd, old-timey songs were picked up, later to be recorded, by the Holy Modal Rounders and the Youngbloods. His debut album, the well-titled First Songs, appeared on the Folkways label in 1965, and such later LPs as 1971’s Armchair Boogie (Raccoon Records) and Have Moicy! (Rounder Records), his collaboration with the (sic) Unholy Modal Rounders and Jeffrey Frederick & the Clamtones, are acknowledged classics as well. In recent years, the freak folk generation has cottoned onto Hurley’s endearing craft, resulting in his music being released on such sage young imprints as Tompkins Square, Gnomonsong, and Mississippi.

Here he is, singing the delightful “The Slurf Song” in 2012:


Michael Hurley will perform at the Bearsville Theater in Bearsville, New York, on April 19 at 8pm. Paul McMahon opens. Tickets are $15. For more information, call (845) 679-4409 or visit http://www.bearsvilletheater.com/.