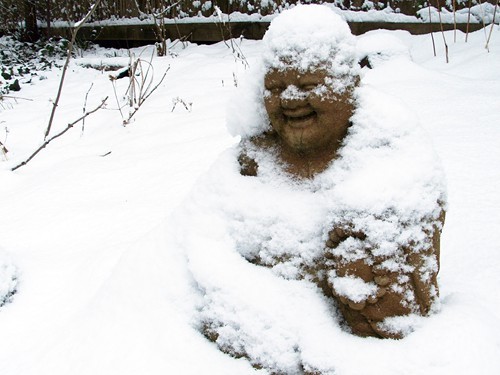 February is almost gone, but the snow and ice keep coming - reminding us that we're still very much in winter's grip. After nearly every snowfall, I find myself recalling Billy Collins' poem "Shoveling Snow with the Buddha": "...with every heave we disappear / and become lost to each other / in these sudden clouds of our own making, / these fountain-bursts of snow."

There is indeed a beautiful monotony of shoveling - but it can be a dangerous business if you don't do it safely. Daniel Markowicz, MD, orthopedic surgeon at White Plains Hospital, offers a few tips to reduce the risk of injury to the back, which is particularly susceptible. “Shovel snow in smaller loads, bending at the knees and lifting with your legs rather than your back," says Markowicz, "and step in the direction in which you are throwing the snow to prevent the low back from twisting."

Certain individuals may also be at increased risk for a heart attack when exerting the body in cold weather. “Shoveling snow can increase your blood pressure and heart rate," says Markowicz's colleague, Rafael Torres, MD, medical director of Emergency Medicine at White Plains Hospital. "That, combined with the blood vessel constriction and the resulting decrease of oxygen in the heart that occur in cold weather, can set you up for a heart attack.”

Both doctors advise waiting until you've been awake for at least a half hour before shoveling snow, to let the body and heart wake up. Avoid heavy meals and caffeine before shoveling, and take the time to stretch before heading outside. Those with a history of heart disease or who have had a heart attack should talk to their doctors about whether or not they should be shoveling snow.

And don't forget to take breaks to catch your breath, like Collins' Buddha does: "leaning for a moment on his shovel /before he drives the thin blade again / deep into the glittering white snow."