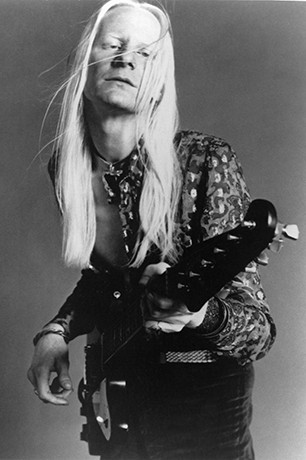 He’d been in declining health for quite some time, but it was still a shock when we lost Johnny Winter earlier last July. The sidewinding Texas blues rocker was one of the true guitar gods of the 1970s, and it seemed that his being well enough to stand up just meant that he’d adapt and continue, tearing it up from his chair a la the blues heroes he worshipped. But fate, unfortunately, had a different outcome in mind for the six-string legend, who’s now jamming alongside those same heroes at the big juke joint in the sky. To celebrate his legacy, the final lineup of Winter’s backing band is set to play the Bearsville Theater on Saturday, an event that will also include a screening of the new documentary Johnny Winter: Down & Dirty.

Dubbed “The Johnny Winter Remembrance Show,” the evening has been put together with the approval of Johnny’s brother, musician Edgar Winter, and their family. The show features guitarist Paul Nelson, bassist Scott Spray, and drummer Tommy Curiale, all of whom toured with Winter and recorded on his final album, Step Back (Megaforce Records).

Watch this trailer for Johnny Winter: Down & Dirty:

“The Johnny Winter Remembrance Show” and film screening takes place on Saturday, November 22 at the Bearsville Theater at 6:30pm. Tickets are $35-55. For more information, call (845) 679-4406 or visit http://www.bearsvilletheater.com/.