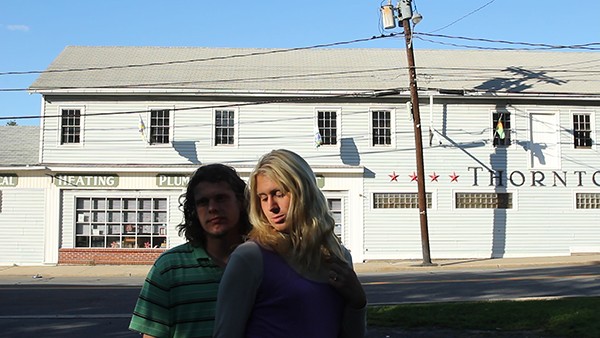 The documentary short film, Passing Ellenville makes its New York State premiere at the 15th Annual Woodstock Film Festival on October 15th, and continues screenings through the 19th. Co-directed by Gene Fischer and Samuel Centore, Passing Ellenville follows two transgender youths in Ellenville, NY as they journey through the gender transition process. The film serves as portrait of humanity visually presenting the daily challenges of transgender youth in a rural, conservative setting who are trying to survive on government assistance while facing transphobia, verbal abuse, and threats of violence.

Starting as a photographic essay in 2012 by photographer Gene Fischer, Passing Ellenville was filmed in the small economically-depressed town over an 18-month period. The film follows James, a female-to-male, coming from a history of abuse and a string of family problems and Ashlee, male-to-female, who struggles to align her orthodox Jewish faith with her transgender identity. The film simultaneously depicts the moments of happiness and joy found in James and Ashlee life as they make their life journey.

The film is joined with the inaugural LGBTQ Focus at the festival and will be presented at the Orpheum Theater in Saugerties on Saturday, October 18th at 7 pm and Sunday, October 19th at the Bearsville Theater in Woodstock at 2:45 pm. Find tickets here.

Taking another look at the transgender community Hillary Harvey’s upcoming article “The Hudson Valley’s Transgender Families” investigates how a family, and how the members— parents, child, and sibling— struggle with communal acceptable while raising a transgender child. Along side the characters of Passing Ellenville, Harvey speaks to programs such as Choices Counseling and Consulting, and educates readers in the November issue of Chronogram on the belief that transgender is not phase or self expression, but primarily identity.